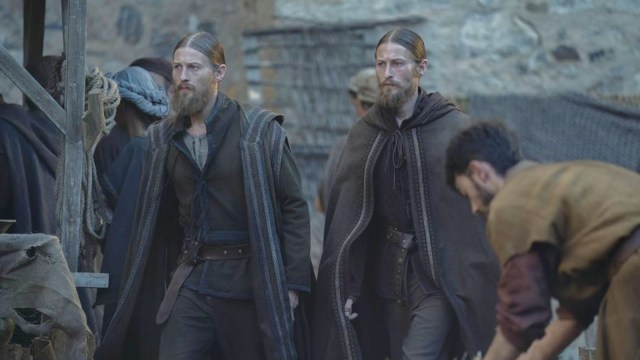 Warning: the following article contains spoilers for House of the Dragon season one, episode nine, “The Green Council.”

Twin brothers Erryk Cargyll and Arryk Cargyll made a big impact in House of the Dragon episode nine, and if you were confused about who they were, you’re not alone.

Elliot Tittensor plays Erryk while Luke Tittensor played Arryk, and yes, they are real-life twins and their character’s similar-sounding names add to the confusion. Visually speaking, Erryk’s mustache and beard are more full, while Arryk’s mustache curls. But really, this is just the beginning of the more obvious differences between the two.

In the episode, King Viserys (Paddy Considine) has just died. So, Otto Hightower (Rhys Ifans) and the Green Council quickly implement their long-laid plans of installing Aegon Targaryen (Tom-Glynn Carney) as king instead of Rhaenyra Targaryen (Emma D’Arcy). The issue they face is that they don’t know where Aegon is. Otto has to rely on Erryk and Arryk, knights in King Viserys’ Kingsguard, to find the wayward prince to quickly move things along. Erryk is sworn to protect Aegon, but the boy used his authority to order him away.

The twins, who have been in the background for four episodes, get proper screen time for the first time in this episode.

It’s easy to see how unalike the two are. In their search for Aegon, they go to an inhumane fighting ring where children’s nails and teeth are sharpened so they can attack one another. Erryk is disgusted that Aegon would frequent an establishment like this. “Do you see now what he is?” asks Erryk, then points out one of Aegon’s illegitimate children. One of many he wagers.

This reveals a clear distinction between Erryk and Arryk. Erryk does not approve of Aegon’s actions and is not in favor of the boy being king. He’s loyal to King Viserys’ wishes for his daughter Rhaenyra to be named his successor and he’s only been loyal to the Greens because it was his sworn duty. Arryk retaliates by saying that they swore an oath of service until death and they are not to question the orders they’re given.

The gap between them grows even wider when Ser Criston Cole (Fabien Frankel) and Aemond Targaryen (Ewan Mitchell), commanded by Alicent to find Aegon, find the twins, and battles ensue. Arryk fights Criston and Aemond fights Aegon. But during the chaos, Erryk, who has had enough, leaves and finds Princess Rhaenys (Eve Best), a supporter of Rhaenyra, and helps her escape from the room she’s been locked in.

The show has a habit of showing siblings on opposite sides and the Cargyll twins are no different as Erryk will leave to join Rhaenyra’s Queensguard while Arryk will maintain his service to the Greens. This won’t be the last time the Cargylls play an important role, as the war is about to start and dragons do battle in the House of the Dragon finale.

House of the Dragon airs weekly, every Sunday, on HBO and HBO Max.