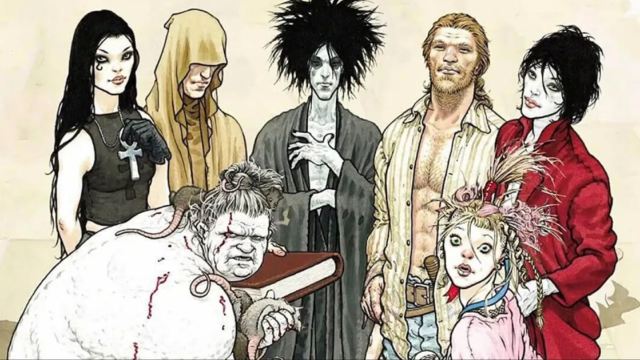 Who knows where the dark fantasy of The Sandman started? Conventional wisdom is that Morpheus, the Lord of Dreams, arrived on paper, filtered through the plots, script, and art of Neil Gaiman, Sam Kieth, and Mike Dringenberg. But a twinkle in the dark eyes of the Dream Lord suggests otherwise.

Wherever it began, it has spread far and wide. From the pages of DC Vertigo comics to the wider DC Multiverse and onto audio adaptations and a high-profile Netflix series, Dream, to give this personification of everything unreal another name, is everywhere.

Different media adapts the Sandman saga differently, but each is a step into dreams that explores themes of reality and responsibility. It’s a modern classic that takes readers, listeners, and watchers from Earth to Hell via the Dreaming — the realm of the Dream Lord.

The opening arc of Sandman deals with a universe without Dream. Imprisoned for decades, Morpheus’s realm fractures and disintegrates. Rogue nightmares escape the Dreaming as it falls to ruins and humans absorb facets of the Sandman — a nod to past DC Comics continuity and earlier superheroes that went by the name Sandman.

Chaos ensues when the natural forces of the universe are left ungoverned, and the Dreaming is only one realm. While Morpheus is Lord of the Dreaming, he’s also one of the seven Endless, a dysfunctional set of siblings, each personifying an aspect that governs the existence of everything in the universe.

Sitting above gods, the Endless are the product of Night and Time — their figurative and literal children. But unlike their parents, the siblings all have names that begin with the letter D. These are not names in the typical sense (although Morpheus tends to collect nicknames) but their function.

The Endless may not be siblings as we understand them, but they operate as a typical family unit — calling family meetings, falling out, and trying to get one over each other.

The abandonment of his family and responsibilities makes middle sibling Destruction the subject of a critical story arc in Sandman. The oldest, Destiny, tries to stay above the squabbling of his younger siblings. While Death generally gets on with all the others (she will be the last sibling they see after all), her closest bond is with Dream. The three youngest siblings, however, all mistrust Dream. Desire holds the biggest grudge and is the most manipulative of the seven. Throughout the original saga of 75 issues, it’s worth keeping an eye on Desire as they tease their siblings and worse.

The Endless are universal forces and can survive destruction by being reformed and returned to their duties. However, by their very existence, they are not immortal. There will be a point in the DC universe where Death is destined to be the final being in existence. As Destruction put it, and he should know best, “The Endless are echoes of darkness, and nothing more… And even our existences are brief and bounded. None of us will last longer than this version of the Universe.”

Much of the Endless remains unknown, and that’s deliberate. Sandman creator Neil Gaiman wanted to leave the many mysteries of this family to readers’ interpretations. If you’re familiar with Gaiman’s exploration of myth in the modern age, American Gods, you’ll know the importance of belief to gods. As the Endless are not gods, they continue, whether anyone believes in them or not until they are destroyed and reformed as a variation or leave their responsibilities. They are as old and as timeless as the concepts they personify.

If any of Endless abdicate their responsibilities, like Destruction, or are removed from their duty, those functions are distributed throughout the universe. Naturally, things become chaotic when something like death is shared around. That was the upshot of Dream’s imprisonment during most of the 20th century.

While in post, the Endless follow a set of laws that become apparent throughout the Sandman volumes. Although rules are there to be broken, doing so has consequences. Relationships with mortals are frowned upon, and we see several occasions where Dream’s relationships end badly. A fundamental rule in the family is that harming a family member will return suffering to the perpetrator. The series explores that through Dream’s dealings with his troublesome sibling Destiny and troubled son Orpheus.

The appearance of the Endless changes based on the eye of the beholder. Death and Dream are commonly seen as pale, dark-haired figures, or perhaps that’s just how we read them. Desire and Delirium, as befits their responsibilities are prone to change more than most — the latter even alters physical appearance in the middle of a sentence.

Each of the Endless controls a realm of which they are the absolute ruler and a sigil that represents them. They can communicate with and summon each other using a gallery of sigils within each domain. These emblems are of great importance to each of the Endless, as demonstrated by Dream’s quest to reclaim his distinctive helm and sigil, among other totems, in the opening story of Sandman.

These are the seven Endless in order of age:

The oldest and most aloof, Destiny is the blind sibling who governs from his realm, the Garden of Forking Ways. His sigil is the Book of Destiny chained around his wrist.

We know little of Death’s realm (who’d want to visit?), although her sigil is an ankh. Death is personified as a young goth woman, cheerful and personable — although her role may be the most proactive of the siblings. Everyone who has or will ever die is escorted from the mortal plane by Death.

The Lord of Dreams and ruler of the Dreaming. A sulky, taciturn, and moody rake of a figure, under his shock of black hair, his eyes continually twinkle. The Sandman series shows how 70 years of imprisonment have changed him. His sigil is the imposing helm he occasionally wears.

The prodigal Endless — charismatic, loud, and red-haired, disappeared during the Enlightenment. He chose not to pass his mantle on as he believed neither he nor his siblings should involve themselves in mortal lives. Naturally, his sigil is a sword.

The genderless Desire is the most self-centered of the Endless and a social chameleon who can easily blend into any situation. Their realm is a colossal statue of themselves called the Threshold, with the ruler living in the heart. Naturally, Desire’s sigil is a glass heart.

The younger twin of Desire generally appears as a short, naked, and grotesque woman. It’s an unsettling portrayal, as is her record as the first of the siblings to have been destroyed. She lurks in The Gray Realm, packed with rats, fog, and floating mirrors through which she looks back at mortals. Despair cuts herself with a hooked ring that is also her sigil.

The youngest sibling changed her name from Delight for reasons or non-reasons only she understands. Delirium is the sibling who physically changes the most, and her realm reflects her state of mind. It requires a great deal of focus to navigate. Delirium’s sigil is a swirl of colors that darkens with her mood.