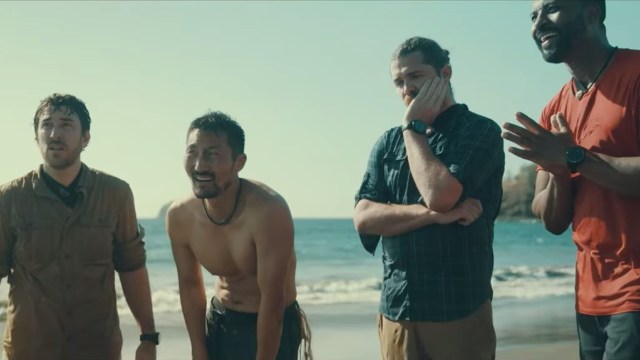 America is celebrating the arrival of yet another needless reality series, and fans of the genre are already lining up.

USA Network’s Snake in the Grass offers up a premise similar to that from the phenomenon that was Among Us in 2020. The series, which is set to debut on Aug. 1, 2022, drops four players into the wild for a 36 hour competition, during which time they are hoisted into a range of difficult challenges. All the while, the team is hard at work attempting to uproot the “snake” in their midst. See, one player is a saboteur, and each challenge passed will provide additional details about the snake’s identity. The snake, meanwhile, is challenged with the task of concealing their identity through the entirety of the game, and is given the opportunity to conceal their sabotage as the game goes on. Each episode, a different team is up for the grand prize of $100,000.

The idea of pitting an imposter against other members of their own team in a reality television show is certainly interesting, and audiences are already intrigued. A few of the faces that have cropped up in trailers look distinctly familiar, particularly to fans of reality TV, and audiences have been trying to place them since the first trailer dropped. Where have we seen these Snake in the Grass cast members before?

The Snake in the Grass cast

Many members of the cast of Snake in the Grass will look familiar to reality show regulars. A huge number of the contestants have cropped up in at least one other reality competition, ranging from the grueling Naked and Afraid, to the far more tame Big Brother. Apart from host Bobby Bones, of course, who audiences will instead recognize from his podcast series, Make It Up As We Go, or his self-titled documentary, Breaking Bobby Bones. He’s also taken part in a few reality and competition series of his own, with credits on Dancing with the Stars, Running Wild with Bear Grylls, and American Idol under his belt.

Other contestants have largely cropped up in reality competition series similar to Snake in the Grass. We’re sorting each contestant by the primary show they’ve appeared in before — though some have cropped up in more than one — so browse through the following list to track down why those faces look so familiar.

A few recognizable contestants from several of Big Brother‘s whopping 24 seasons are set to compete in the first season of Snake in the Grass. Fans of the CBS series might recognize these gals from their separate stints on the televised social experiment.

Rachel Reilly is a habitual reality show contestant, with credits on a wide-ranging handful of competitions. She’s cropped up in The Amazing Race: China Rush, Reality Relapse, and multiple seasons of Big Brother. Fans will recognize her from seasons 12, 13, and 14 of the series, and she even returned for single episodes in later seasons of the show, including seasons 16, 18, and 20.

Janelle Pierzina boasts one of the more recognizable names on this list, thanks to multiple stints across reality television programming. On top of her time on Big Brother, Pierzina fans may recognize her from The Amazing Race or one of several background appearances in shows like Friends and Las Vegas. Her biggest claim to fame is certainly the aforementioned Big Brother, however, in which she appeared on numerous occasions. She crops up in seasons six, seven, eight, 10, 11, 14, and 22 of the popular show.

A rare few battle-scarred contestants from former seasons of Naked and Afraid are also signing on to the first season of Snake in the Grass. The contest in USA Network‘s latest series isn’t nearly as brutal as that in Naked and Afraid, but we’re sure these reality show regulars will find plenty of use for the skills they learned on the desolate series.

It turns out Jeff Zausch really likes to get naked on TV. He’s been in a full four series with the word “naked” in them, including Naked After Dark, Naked and Afraid, Naked and Afraid: Savage, and of course Naked and Afraid XL. He’s bringing all those skills he learned while severely dressed-down to the table for his stint on Snake in the Grass.

Lacey Jones doesn’t boast nearly the same number of naked appearances as her fellow Naked and Afraid alumni, but she was a mainstay on both the original program and its more brutal older brother, Naked and Afraid XL. In total, she’s appeared in six seasons of the show, which seems like excellent prep for her upcoming stint on Snake in the Grass.

Quite a few Survivor alumni signed on to Snake in the Grass. Given the arduous nature of many of the tasks included in USA Network’s latest reality series, it makes sense to lean on the expertise of these Survivor veterans.

Stephenie LaGrossa is a Survivor mainstay, with stints on several seasons lending her credibility among the show’s audience. She first cropped up in the Ulong Tribe — and the Koror Tribe, and the Nakúm Tribe, and the  Xhakúm Tribe — in season 10 of the CBS series, before reappearing in seasons 11 and 20 as a survivor of Survivor.

Malcolm Freberg has a bit more name recognition among non-reality show die-hards, thanks to his work on travel series Wayfinding, but it’s his time on Survivor that lends Freberg the majority of his credibility. He appeared in seasons 25, 26, and 34 of the popular show, and quickly cemented himself as a fan favorite.

Of all the people on this list, Trish Hegarty experienced one of the shortest stints on her reality television series of choice. She was a contestant on season 28 of Survivor back in 2014, and in the years since has largely stayed below the radar. Up until her shift over to Snake in the Grass, of course, which will see the former Brawn and Solana Tribe member return to the mainstream.

Yul Kwon’s primary claims to fame are largely separate from his reality television appearances, but that doesn’t make his time on Survivor any less impressive. Largely appearing as himself, Kwon has credits on a number of programs, including America Revealed, Angkor: Land of the Gods, and Shark Week, but his longest stint on television is still Survivor. He appeared in seasons 13, 20, and 40 of the longstanding program.

Many Survivor favorites return for at least a few additional seasons following their debut, and Cirie Fields is no exception. After dazzling audiences in season 12 of the popular show, she returned for seasons 16, 20, 33, and 34. She’s now prepped to bring all that hard-won experience to the table in Snake in the Grass.

The only Survivor alumnus with no return appearances on the program, Earl Cole is one of the less-known names on this list. He appeared in the show’s 14th season back in 2007, and managed to worm his way into fans’ hearts during his brief stint on the series.

There are a number of other people set to appear in the first season of Snake in the Grass, but you’re unlikely to recognize any of them — except Wyatt Werneth. Snake in the Grass will be Werneth’s debut reality show, but fans are still likely to recognize the popular stuntman from shows like The Walking Dead, Ozark, and Manhunt. He even enjoyed a brief stint on the latest season of Stranger Things.