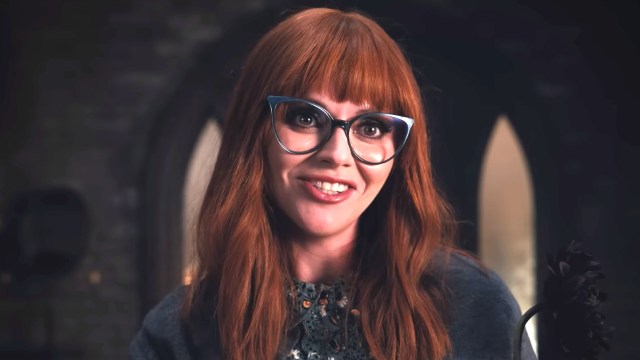 A new twist on the classic Addams Family story, Wednesday, released to Netflix this week, allowing fans to return to the humorous, gothic family.

The new series zeroes in on one of the two Addams children, as she attends Nevermore Academy, a “school for monstrous misfits.” Wednesday was, and remains, one of the most popular characters from the branching Addams Family releases. Celebratory posts highlighting her unique style pepper Imgur each Wednesday afternoon, thanks in large part to the flawless performance of Christina Ricci. Ricci played Wednesday in several Addams Family releases in the early 90s, and to many represents the best-ever encapsulation of the role.

It’s been almost 30 years since Ricci last played Wednesday, a fact that unfortunately disqualifies her from playing the high-school-aged character in Netflix’s revival series. She does appear in the Jenna Ortega-helmed series, however, just not in a role many will recognize.

Who does Christina Ricci play in Wednesday?

Fans were disappointed to learn that Ricci would not return to her role as Wednesday, but trailers for the recently-released series revealed that the celebrated actress is involved with the show. She appears at the tail-end of the series’ official trailer in a far more colorful role than many fans expected, instantly prompting questions about who she plays.

Ricci joins the cast of Wednesday as Mrs. Marilyn Thornhill, a teacher at Nevermore Academy. Thornhill is presented, at first, as one of the academy’s few “normies,” serving as “dorm mom” to the girls attending the school. She is also the school’s botanical sciences teacher, and a bubbly, sweet opposite to Ortega’s Wednesday.

But this is all a ruse. The series slowly unveils a years-old plot against the Addams family, and Ricci’s Thornhill is at its core.

As it turns out, Wednesday’s parents — Morticia and Gomez — attended Nevermore Academy years before. Their all-around oddness made them targets in a murder investigation that ultimately attempted to pin the murder of student Garret Gates on Gomez. Back when they were students themselves, Gomez and Morticia clashed with the notoriously anti-outcast Gates family, all of whom died under mysterious circumstances, leading to the accusations against Gomez.

As it turns out, however, one member of the Gates family survived. Though she changed her name to Marilyn Thornhill in her efforts to infiltrate the academy, long before she was a teacher at the school Ricci’s character was known as Laurel Gates. Her death by drowning, years before, was faked, allowing the character to return to the academy in an attempt to exact revenge on the Addams family.

In an effort to retaliate against the academy, and the Addams clan, in particular, Gates infiltrated the school as a teacher, and used her knowledge of botany to initiate her plan. She created a chemical intended to unlock the Hyde to teenager Tyler Galpin’s Dr. Jekyll and attempted to use him as a weapon in her plot.

This was all done in an effort to finally see the will of her bigoted ancestor, Joseph Crackstone, realized. His vendetta against the outcasts of the world made him dangerous to many and led an Addams ancestor — Goody Addams — to imprison his soul via magic. Gates hoped to free his soul, using Wednesday’s blood, and unleash it on the world. Thankfully, Wednesday and her friends manage to subvert Gates’ plan and stop Crackstone.

They did not, however, manage to finish off Gates once and for all. Her fate is left unclear at the conclusion of Wednesday‘s first season, leaving the show open to bring Ricci back to torment the only Addams daughter once again.

Wednesday season one is currently streaming on Netflix.