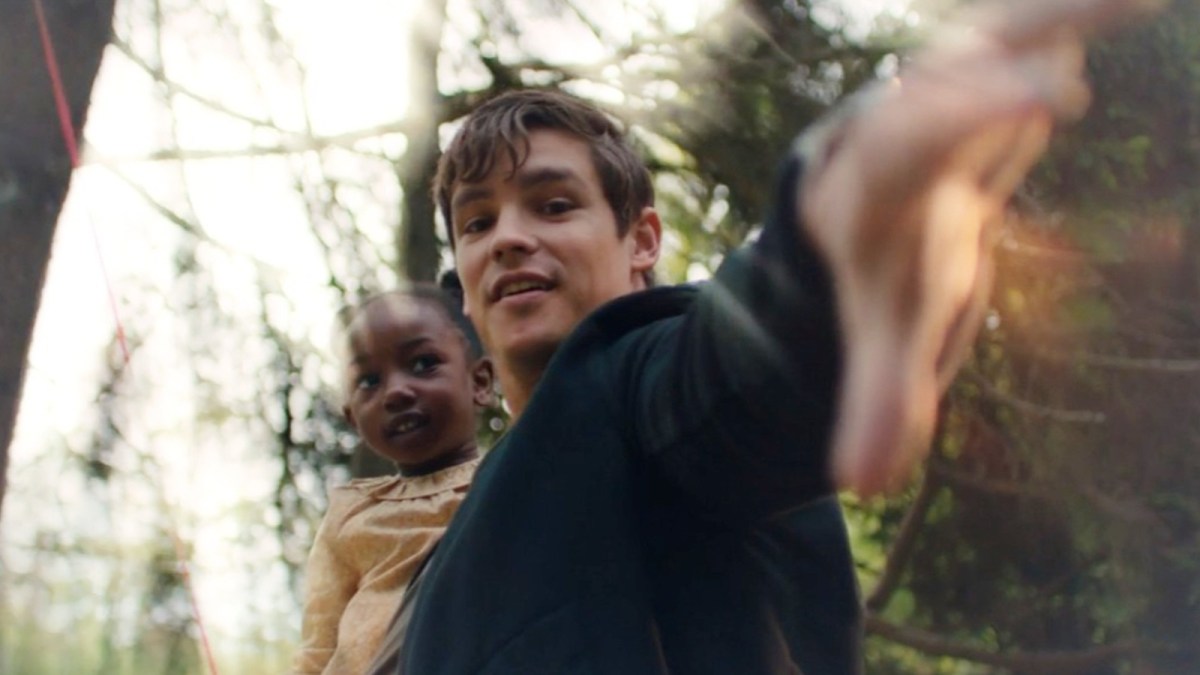 Nightwing and Starfire’s daughter has shown up in Titans season four, and it could mean something major is in store for the team.

The romance between Nightwing and Starfire is getting stronger by the episode. Dick Grayson (Brenton Thwaites) and Kori Anders (Anna Diop) have been building since season one and it’s finally paying off in a big way. The two have unmistakable chemistry and despite Dick having taken some detours, it looks like the vigilante crimefighter and the Tamaranean are taking their relationship to the next level. Fans have been desperately pleading for this to happen, and with future scenes showing Dick and Kori’s child, it looks like this could be an endgame.

The little girl with the red balloon

Season four isn’t the first time we’ve seen the young girl. In Titans season three, the team was operating in Gotham City, Nightwing battled Jason Todd/Red Hood and he was killed in the process, but not for long. He was placed in the Lazarus Pit, which has the powers of resurrection, and he experiences a future vision. In this vision, he confronted his purpose as a hero and his parent’s death. Then, a girl holding a red balloon walked toward him, handed him the balloon, and said: “Hi, Daddy.”

The little girl returns again, but this time it’s Starfire who sees her. Starfire and Rachel Roth/Raven (Teagan Croft) go to Elko’s Diner (a site of great, mystical power) to keep Sebastian Sanger (Joseph Morgan) away from the witch Mother Mayhem (Franka Potente). The Tamaranean Zadira (Somkele Iyamah-Idhalama) is here and she believes that Sebastian needs to die to stop him from becoming a great threat, but Starfire stands in her way. That’s when Zadira rings the bell on the counter, and Starfire is transported elsewhere.

Starfire arrives in a forest where that same little girl is there holding a balloon. Dick is there too and his daughter asks him to pick her up. He does, then takes Starfire to a birthday party with all the Titans for the girl. Then, Starfire holds her head and screams in pain, and everyone disappears. All that’s left is the red balloon floating to the sky. Starfire returns to Elko’s Diner and Zadira warns her that this is what will happen if she doesn’t stop Sebastian. She was never meant to save Sebastian, she was meant to kill her. That is Starfire’s destiny.

Mother Mayhem has been manipulating events in Sebastian’s life to bring him over to the dark side. In season four, episode five, “Jinx,” she tries to get him to say the words, “Azarath, Metrion, Zinthos,” but the Titans swooped in and took him away before he finished the chant. Now, a Blood Moon hangs in the air and if Mother Mayhem succeeds in her plans, the world will suffer a great cataclysm of biblical proportions, putting Nightwing and Starfire’s happy ending (and the lives of billions) in jeopardy.

Nightwing and Starfire’s daughter in the comics

Nightwing and Starfire had a daughter in the comic books as well. Kingdom Come by Mark Waid and Alex Ross was an alternate history in the DC Universe, but it’s influenced other stories and even the Arrowverse’s Crisis on Infinite Earths event. The late Batman: The Animated Series voice actor Kevin Conroy even got to play a Kingdom Come-inspired Batman in a rare live-action appearance.

Nightwing and Starfire had a daughter named Mar’i Grayson/Nightstar in Kingdom Come. She was half human and half Tamaranean with energy manipulation, but tragedy struck her early in life when her mother died. She becomes a superb hero (how could she not with parents like them?), she joined Batman’s Silent Cavalry team and saved Dick from the U.N. nuclear strike. The two of them had a strained relationship in the story and Nightwing didn’t want his daughter to have any part of the Silent Cavalry. Nightstar very much had Starfire’s strong personality and she chose to disobey her father, which ended up working out in the long run.

It’s not for certain that this is Mar’i, but setting up a character who will eventually follow in their parent’s footsteps to keep the peace for the next generation would be epic. First, the Titans will have to save the world and stop Mother Mayhem before all is lost.