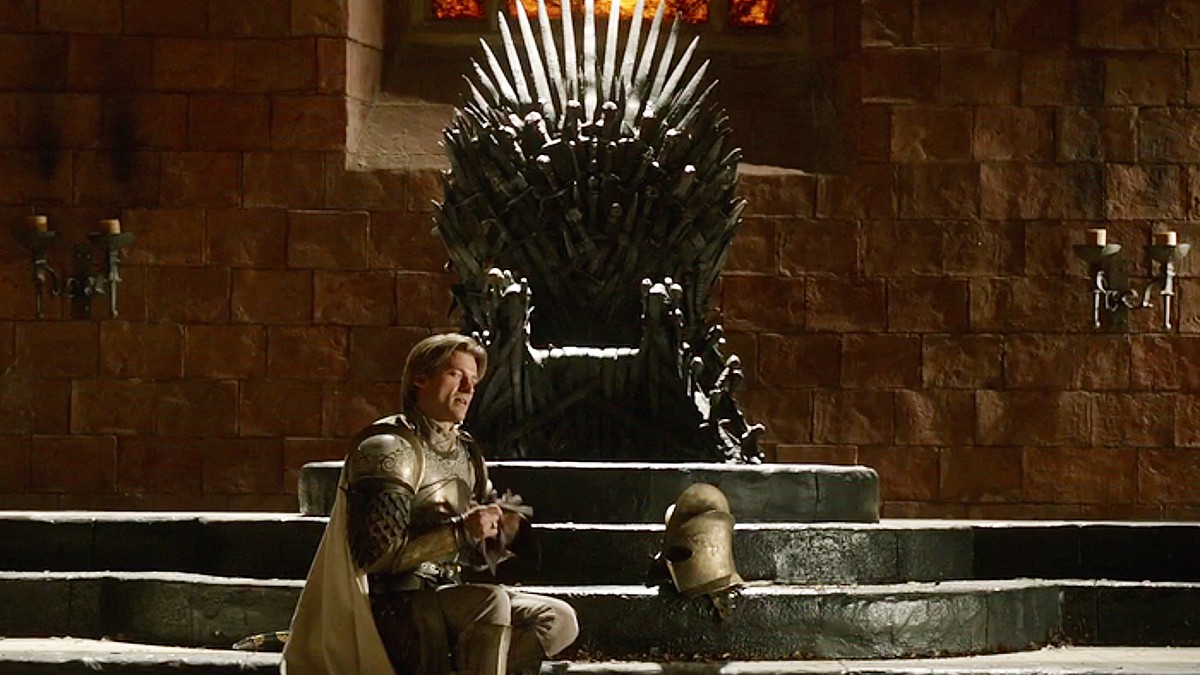 The Mad King is a name that gets thrown around a lot in Game of Thrones, and for good reason. The events involving the Mad King lead directly into the War of the Five Kings and throughout the remainder of the story. As it is with most things in George R.R. Martin’s world, there’s more to it than meets the eye.

Aerys Targaryen II was called the Mad King and he definitely lived up to the title. Daenerys Targaryen is his daughter and she had to pay for her father’s actions, even though she never met the man. Despite not being featured in the HBO series, his presence loomed large over the story’s proceedings. Characters in the show were directly involved in his demise and his death ended the succession of Targaryens on the Iron Throne and their hold on Westeros.

Heir of the dragon

Aerys II was the eldest son of King Jaehaerys, and he was named after Aerys I who was a believer in prophecies. King Jahaerys was told by a woods witch that his son needed to marry his sister Rhaella, and his father made this happen. Aerys and Rhaella married and had a son Rhaegar during the Tragedy of Summerhall, then he joined the war at the age of 16. When the nine penny kings challenged the Iron Throne, Aerys joined the campaign and met Tywin Lannister. The two became close and a friendship was formed between them and were knighted for their bravery in battle.

King Jahaerys was a sickly man who eventually died from an illness at 37 years old, putting Aerys on the throne at the age of 18, and he committed to having more sons. Aerys swaps out many of his father’s council for younger men and makes Tywin his Hand, which made him successful. Tywin’s steadiness helped secure the realm and this was mostly a time of peace, despite Aerys not doing very much. Aerys had big dreams, like building another wall in the north, but these dreams were shortsighted and he didn’t really have much follow-through.

His relationship with Rhaella grew worse and he took many mistresses, and it was difficult for them to have another child. Rhaella had multiple miscarriages and Aerys blamed her for them, believing she was being unfaithful and the gods killed them to ensure that a bastard wouldn’t sit the Iron Throne. Aerys becomes paranoid and places Rhaella in the Red Keep to prevent her from being unfaithful.

Jealousy got the better of Aerys and he undermines Tywin because he was too good at his job and received much acclaim. Aerys tried to make moves on his wife, he disagreed with Tywin’s choices, and when his wife died having Tyrion Lannister, Aerys said that this happened to teach him some humility. Aerys just kept getting worse and worse. His actions grew increasingly paranoid and unstable, but Tywin kept his composure for the sake of his twins, Jamie and Cersei, so that they’d have positions in Rhaegar’s court.

Aerys and Rhaella finally had another son who they named Jahaerys, but the baby didn’t make it a year. He blamed the wet nurse for his son’s death and had her beheaded, then blamed his mistress for poisoning Jahaerys and tortured her and her family. Years later, they have a son that they named Viserys, and Aerys become overprotective. He doesn’t allow anyone to touch him, he burns the gifts sent for him, and he refused to let his mother be alone with him.

The Defiance of Duskendale was the main event that turned Aerys into the Mad King. Before the Targaryens ruled the Seven Kingdoms, Duskendale was a glorious harbor town off the coast of Blackwater Bay that made great profits through trading before King’s Landing grew into the most powerful kingdom. Denys Darklyn, the lord of Duskendale, didn’t want to pay the high port fees and requested for them to be lowered, but Tywin denied him. Denys asked to meet with the king, and despite Tywin’s advice to the contrary, Aerys goes to Duskendale and he’s captured.

Tywin and his army waited outside Duskendale for six months, demanding that the king be released, but Duskendale didn’t budge. Tywin prepares to invade Duskendale, but Ser Barristan Selmy was able to sneak into the town and saved the king, but he was never the same. Aerys became a shell of a man. His paranoia reached new levels and he refused o let anyone touch him. He remained in the Red Keep for four years and apart from his own guards, no blades were permitted near him. Aerys was 33 but he began looking much older than his age and had long hair and nails. When it was time to seek vengeance against House Darkling, he takes it to the extreme, torturing Denys’ wife and then burning her. He was in full Mad King mode.

Aerys then turned on Tywin. His Hand was willing to take Duskendale by force, which meant that Aerys would likely die had it not been for Ser Barristan Selmy. He stopped meeting with Tywin and quickly found a wife for Rhaegar to ensure he didn’t wed Cersei, but his ally Steffon Baratheon was unable to complete the task of finding a suitable woman of Valyrian bloodline, and his ship wrecked on his return home. Aerys blamed Tywin for this and that’s when he brought in Verys from Pentos to be his Master of Whispers.

Aerys wanted to bring back dragons, but when that failed he became more obsessed with fire, namely the explosive wildfire, and the pyromancers of the Guild of Alchemists were given more influence in King’s Landings affairs, and Rossart became his new Hand. Jamie Lannister was sworn in as part of his King’s Guard at the Tourney at Harrenhal and Tywin resigned from his position of Hand. But at this tourney, Aerys’s disposition was seen by all who had gathered there. He was clearly unwell by his unseemly appearance and he acted erratically regarding a masked knight.

Rhaegar won the joust and made his affection for Lyanna Stark known by crowning her as the queen of love and beauty (not his wife Elia Martel), and it upset Aerys and Robert Baratheon, who was betrothed to Lyana, Aerys, and Lyanna’s older brother Brandon Stark. Rhaegar ran away with Lyanna and Brandon Stark and his men rode to King’s Landing to settle the matter, but Aerys imprisoned them for conspiring against the crowned prince and demanded that their fathers come to King’s Landing. When they did, he had them all killed, apart from Brandon’s squire Ethan Glover. Brandon’s father Rickard Stark demanded a trial by combat and Aerys had him burned alive. Brandon watched with a noose around his neck as his father burned and strangled himself trying to grab a sword that was just out of reach.

The love affair and the beginning of the end

Rhaegar and Lyanna’s tryst of course led to the birth of Jon Snow and her subsequent death. Eddard kept her secret and claimed Jon was his bastard. Rhaegar died at the Battle of the Trident, but it’s been said that he fought valiantly in spite of the outcome. At this time, Rhaella was pregnant with Daenerys and traveled to Dragonstone with her son Viserys ahead of Tywin’s forthcoming attack on King’s Landing.

Aerys ordered Jon Arryn to take the heads of Lyanna’s other brother Eddard Stark and her fiance Robert Baratheon, but Arryn refused and revolted instead, starting Robert’s Rebellion. Aerys responded by placing wildfire all throughout the city. He’d rather have it destroyed than have his city taken from him. Tywin comes with his army and he sacks the city. Aerys commanded Jamie to kill Tywin to prove his loyalty, but Jaime pleaded for the king to stop this madness. When Aerys commanded the Wisdom of the Alchemist member Rossart to ignite the wildfire caches, Jaime knew there was nothing else to be done and kills Rossart and the king, officially ending his reign.

Jaime was seated on the Iron Throne with Aerys’ dead body by his feet when Eddard came into the throne room. There was blood still on Jaime’s sword and his title of kingslayer was born at this moment, although it was only he who know what had actually transpired. Rhaella was able to name her daughter Rhanerys before dying in labor, and she was given the name “Daenerys Stormborn” because a storm raged above Dragonstone and it sunk the remainder of the Targaryen fleet.

With Aerys and Rhaegar dead, only Danerys and Viserys remained as the last Targaryens (Jon Snow was Targaryen but this wasn’t common knowledge). Robert’s brother Stannis planned an assault on Dragonstone, and there was a plot from the garrison at Dragonstone to sell them to Robert, but Ser Willem Darry helped them escape and sail to the Free City of Braavos. For years they lived in a house with a red door and they were raised for a while by Wille until he succumbed to his sickness and had to leave again, wandering the Free Cities for years and knowing that if certain people found out about them, they would be killed. Still, this life of constant peril prepared Danerys to fight and reclaim the Iron Throne for House Targaryen.