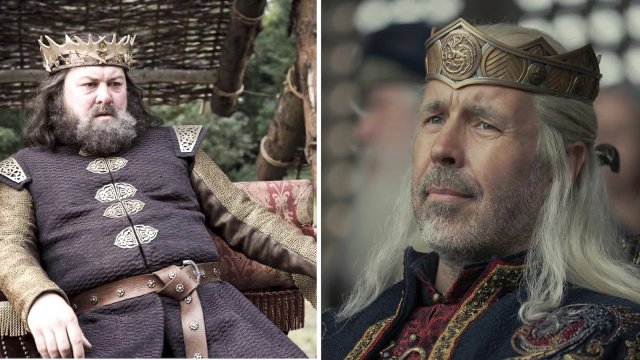 Despite being two hundred years apart, Viserys Targaryen and Robert Baratheon have a lot in common as the King of the Andals and the First Men. Now, the House of the Dragon wants to settle these peculiar comparisons by determining if Robert or Viserys was the better king.

Viserys had a lot to live up to after inheriting the Seven Kingdoms from Jaehaerys the Wise, who is arguably the best ruler in the history of Westeros; a man whose wisdom brought about a golden age of peace and prosperity. In the case of Robert, the man followed Aerys II Targaryen, also known as the Mad King, who dealt the barely breathing Targaryen dynasty the final blow by estranging the house from the rest of their allies.

One inherited a kingdom already at the height of its power, and the other essentially usurped the Iron Throne after 300 years of Targaryen rule. But the two had one thing in common: They both hated ruling, and if it were up to them, wearing that crown would be the last thing they’d choose to do.

So, let’s have it out. Who was the better king, Viserys or Robert?

The House fandom is obviously going to be biased in their answers. For most folks, Viserys has been much more recent and relatable. Even barring the obvious advantage, though, there’s no denying that he generally cared more about the realm than Robert.

Viserys cared for the realm and even attended the Small Council meetings, but Robert spent his entire time whoring and hunting. Of course, the Baratheon heir wasn’t always like this. When he took the crown from Aerys, Robert worked hard to unite the realm and bring about a period of peace, as fragile as it proved to be. Viserys, on the other hand, continually made the wrong decisions and was, to a certain degree, responsible for the devastating Targaryen civil war known as the Dance of Dragons.

Maybe the moral of this entire story is that there are no good kings. And perhaps we’d all be wiser to take a page out of Sandor Clegane’s book when he said… well, you know.