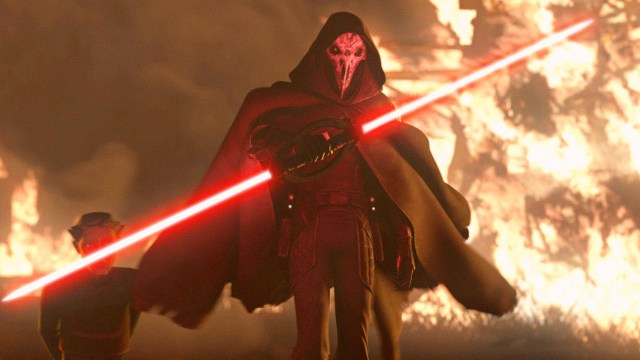 Warning: The following article contains spoilers from Star Wars: Tales of the Jedi.

Disney Plus has released a short Star Wars series called Star Wars: Tales of the Jedi, focusing on two Jedis whose lives took very different paths. The final episode introduces a character called the Inquisitor, leaving many fans to wonder if he could possibly be the Inquisitor known as Sixth Brother.

Count Dooku, otherwise known as Darth Tyranus was one of the main antagonists of Star Wars: Attack of the Clones and Star Wars: Revenge of the Sith. His path led him toward the dark side, unlike Ahsoka Tano, who was a padawan of Anakin Skywalker before he became Darth Vader. The new series focuses on the path Count Dooku and Ahsoka Tano took, while introducing new characters to the Star Wars universe. But as the credits roll, viewers are stuck with an unexpected query — are the Inquisitor and Sixth Brother one and the same?

Did we just meet the Sixth Brother?

Sixth Brother serves as a secondary antagonist in Darth Vader: Dark Lord of the Sith, and the main villain in the Star Wars novel Ahsoka. Before becoming an Inquisitor, Sixth Brother was a Jedi named Bil Valen, a humanoid with grayish-greenish skin and prominent scars on his face.

After the Galactic Republic was replaced by the Galactic Empire at the end of Star Wars: The Clone Wars, an order of Jedi assassins — Inquisitorius Program — was created to hunt down and kill any remaining Jedi who had survived Order 66. Also known as the Clone War Protocol, Order 66 was a top-secret order that designated all Jedi as traitors of the Galactic Empire and therefore, subject to execution.

Inquisitors wear black and grey armor and carry a double-bladed spinning red lightsaber. They were trained by Darth Vader himself, who taught them his aggressive form of attack. The Inquisitors often lost limbs while training with Vader, including Sixth Brother, who had his left arm severed during training. The arm was replaced with a cybernetic arm similar to Darth Vader’s.

While hunting down Jedi on the planet Raada, Sixth Brother came face-to-face with Ahsoka Tano. Ahsoka managed to use the Force to pull the crystals from Sixth Brother’s spinning lightsaber, causing it to blow up and kill him.

There is a lot of speculation that Sixth Brother appeared in Tales of the Jedi as the Inquisitor in the final episode titled “Resolve.” The episode takes place after the events of Star Wars: Revenge of the Sith as we see Padmé Amidala’s funeral being held on Naboo, following her death in the film.

While Ahsoka is hiding out on an unnamed planet, she uses the Force to save a man who is being threatened by the Inquisitor. He uses his double-bladed lightsaber, but she counters and grabs the lightsaber from him, cutting him down.

Some viewers believe the Inquisitor was Sixth Brother, but this version of the story would differ greatly from the Ahsoka novel, where he was killed when his lightsaber exploded. The difference could be attributed to a different person’s vantage point. The Inquisitor in Resolve did have a cybernetic left arm, as seen clearly when he first attacks Ahsoka.

However, Darth Vader cut the hands or arms off of many of his Inquisitors during training, so the Inquisitor having a cybernetic arm is not proof that it’s Sixth Brother. Until Disney or Lucas Films confirms something officially, it would be safe to presume the Inquisitor was not Sixth Brother, who would surely have a larger role and a more intense fight scene.

Star Wars: Tales of the Jedi is currently streaming on Disney Plus.