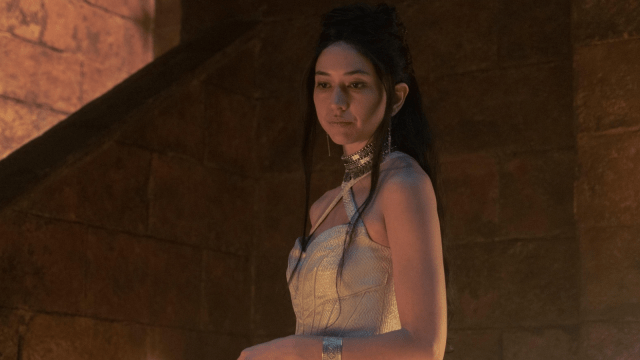 Warning: The following article contains spoilers from House of the Dragon.

House of the Dragon has aired its first season’s penultimate episode and as always, a lot of dominos have been set up to tumble in the finale, as the impending civil war comes to a boil. This week we saw the White Worm play an important role in the coup to install Prince Aegon on the Iron Throne, but who exactly is the powerful figure with the weird title?

While the White Worm wasn’t directly referenced or mentioned until episode four of House of the Dragon, the mysterious figure has popped up on our TV screen a number of times, as early as episode two, as a matter of fact.

You may recall that Viserys’ brother Daemon had a bit of a wild streak in the early episodes of the series, ending up at odds with his brother and just about everyone around him and getting himself kicked out of King’s Landing on multiple occasions.

You also may recall that Daemon took an illegitimate second wife in Mysaria, a former sex worker he met at a pleasure house in Kings Landing.

Is Mysaria the White Worm?

While Mysaria falls off the grid for a few episodes while Daemon slowly makes amends with the family (and babies with his niece), she has popped up a number of times since.

She is seen exchanging information and money with a young man who tailed Rhaenyra and Daemon after their romp at the pleasure house, then again in episode eight when one Alicent’s maid pays Mysaria a visit to inform her of Aegon’s sexual assault on another maid.

While her identity has never been confirmed absolutely in the HBO TV series so far, a quick peek in George R.R Martin’s source material Fire & Blood pins the title of White Worm to Mysaria without a shadow of a doubt.

Of course, the White Worm herself gave up Aegon’s location to Otto Hightower in exchange for two things: Acknowledgement of the fact that she is ultimately the one that put Aegon on the Iron Throne, and that the Hand puts an end to the underground fighting ring which pits children against one another.

We’ll have to wait and see if those pledges bear fruit or if the White Worm uses the mounds of dirt she has on the Hightowers against them in the future.