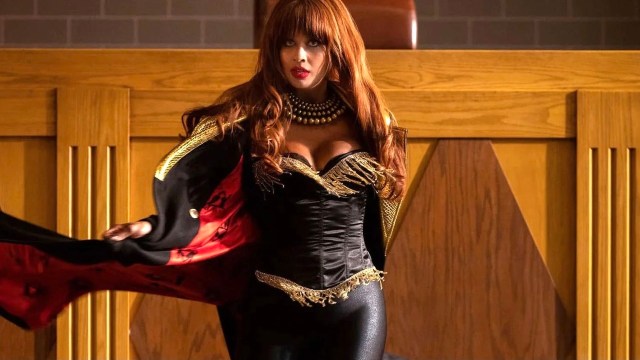 Disney Plus’ latest Marvel series is already proving to be one of its most popular.

She-Hulk: Attorney at Law has yet to conclude its first season, but it’s already generating plenty of buzz online. The majority of this buzz centers around Tatiana Maslany’s Jennifer Walters, the protagonist of the series, and her relationship with Mark Ruffalo’s Bruce Banner, but some fans have pivoted their attention to other characters.

This includes Titania, the woman who appears poised to enter the show as its first official villain. She’s already made her debut in the first episode, but fans largely remain in the dark about her character. Here’s a look at the Marvel lore behind this upcoming MCU villain.

Who is She-Hulk’s Titania?

She-Hulk’s Titania — not to be confused with Tatiana, the actress playing the show’s lead — sauntered onto screens in the show’s debut episode, but has largely been absent since. She’s cropped up in plenty of teasers, however, leading fans to believe that she will serve as the first season’s villain.

Titania has a long history in Marvel comics, starting all the way back in 1984. In the years since, she’s become one of the most recognizable She-Hulk villains and is considered the green-skinned hero’s greatest foe. She originally boasted the name Mary MacPherran before switching it up with her supervillain alter-ego.

Before she became Titania, Mary was a timid, willowy woman who was the constant target of bullies. Through her childhood, she dreamed of gaining superpowers so that she might prove her naysayers wrong and exact revenge on those who’d treated her poorly. Her wish was eventually granted after a chance meeting with Doctor Doom provided her with the means to attain a major upgrade.

Following some careful experimentation, Titania emerged as a larger, more muscular, and all-around more appealing version of Mary. In Marvel comics, she went on to test her mettle against a number of the greats, including Thor and the X-Men, but it’s her longstanding rivalry with She-Hulk that really stands out.

Titania’s transformation at the hands of Doctor Doom provides her with a range of abilities, many of which mirror She-Hulk. She is incredibly strong and is, in fact, broadly considered one of Marvel’s strongest villains of all time. Her strength even rivals that of She-Hulk and is consistently supplemented by the villain’s rigorous workout regime.

On top of her impressive strength, Titania also boasts incredible endurance, durability, and stamina. This allows her to take some major hits without damage and keep up with the talented heroes she often finds herself pitted against. Her body can endure some major damage, including extremely high temperatures and high-caliber bullets, without taking damage. Titania is a stellar match for the super-strong She-Hulk, mirroring the character’s abilities in almost every respect and thus forcing Jennifer to think outside the box when they come toe-to-toe.

Her entrance into the MCU — flawlessly pulled off by Jameela Jamil of The Good Place fame — is already stirring up hype, and fans can’t wait to see how her character works into the rest of the season — and the MCU at large.