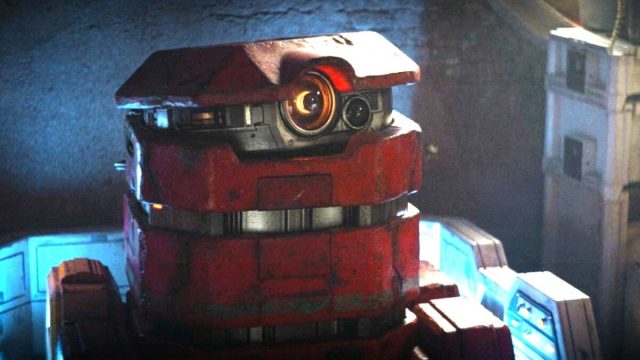 Photo via Lucasfilm/Disney Plus

Andor has officially debuted on Disney Plus, kicking off with a super-sized three-part premiere which not only reintroduced us to Diego Luna’s eponymous Rebel Cassian Andor but also welcomed several new key players into the Star Wars galaxy. And, unsurprisingly, the Andor character who has made the biggest impact on fans is the franchise’s latest adorable droid, B2EMO.

The squat, boxy B2EMO — also known as “Bee-Two” or just “Bee” — is a salvage assist unit owned by Maarva Andor (Fiona Shaw) – Cassian’s adoptive mother who rescued him from his homeworld of Kenari after an imperial ship poisoned the planet. While the family was laying low on Ferrix, Bee-Two acted almost as Cassian’s reluctant partner in crime, with Andor getting the groundmech droid to lie for him when he got into trouble. The character is also notable for being the first non-humanoid droid in Star Wars to speak in Galactic Basic (aka English), and not beeps and bleeps.

With his innocent personality and distinctive stammer, Bee-Two has instantly been elevated to beloved status as fans have made it known that they would die to protect him. If you’re one of those who adored Bee from the off, you might be wondering who provided the voice of the Wall-E wannabe.

Recent Star Wars series have developed a running gag of casting famous faces as droids, so you wouldn’t know they were even involved in the show unless you looked at the credits. For instance, Taika Waititi as IG-11 in The Mandalorian and What We Do in the Shadows‘ Matt Berry as 8D8 in The Book of Boba Fett. Lucasfilm took a different approach with Bee-Two in Andor, however, as the role went to an unsung key crewmember instead.

Veteran puppeteer Dave Chapman is the voice of B2EMO, marking it his first time lending his vocal talents to the franchise — although this is far from his first contribution to the saga. Chapman served as one of the operators who brought BB-8 to life in the sequel trilogy, not to mention being the main performer of Lady Proxima, the caterpillar-esque Correlian crime boss from Solo: A Star Wars Story.

The British industry vet likewise has a long history with the Muppets films, working on both Muppet Treasure Island and Muppets Most Wanted, as well as appearing in a handful of live-action acting gigs. Namely, 2021’s Last Train to Christmas and as a masked dwarf guard in the fourth episode of Lord of the Rings: The Rings of Power. Chapman also provided Dalek voices in 1997’s Doctor Who skit The Curse of Fatal Death. Star Wars, Lord of the Rings, and Doctor Who — not many people can put that trifecta on their resume.

At the end of episode 3, Cassian escaped off-world with new ally Luthen (Stellan Skarsgard), no doubt to start his time as a card-carrying member of the Rebellion. Bee-Two was left behind on Ferrix, however, but hopefully we haven’t seen the last of everyone’s new favorite droid. Andor unfolds new episodes Wednesdays on Disney Plus.