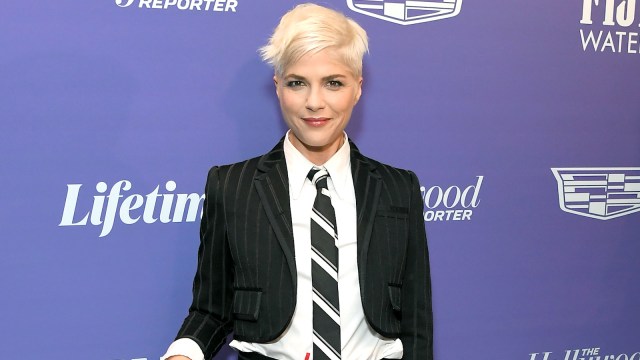 Season 31 of Dancing with the Stars received a sad blow in week five of the competition when actress Selma Blair informed the audience that she was formally stepping down.

The 50-year-old actress and her partner Sasha Farbe performed one last time to Andra Day’s version of the 1965 classic “What the World Needs Now Is Love”. By the time the music stopped and the lights came up the entire ballroom was in tears.

Blair, who has starred in Hollywood blockbusters like Cruel Intentions and Legally Blonde, sat down with Sasha Farbe in a backstage video prior to the performance and shared that while she’d love nothing more than to carry on with the competition, unfortunately her body could no longer support the rigorous demands required to perform weekly routines.

She was diagnosed with an autoimmune disease in 2018

After years of battling pain and negative test results from doctors who told her she was just an overworked single mom, Blair was officially diagnosed with multiple sclerosis, or MS, in 2018, seven years after giving birth to her son. The disease affects the three main components of the central nervous system: brain, spinal cord, and optic nerves. Those affected can experience severe “flare ups” that make it difficult to perform simple tasks such as walking and talking.

Throughout her time on Dancing with the Stars Blair shared that she’d been keeping close communication with her doctors and undergoing regular MRIs to ensure the safety of her body. Unfortunately, recent test results revealed that continuing to push her body to the degree needed to perform could have lasting consequences on her health.

“But I really, you know, want to have one last beautiful dance with you, and bow out,” she told Farbe in between tears. “With a chronic illness, you do have special considerations, and my body is definitely taking a hit. It’s way too much for the safety of my bones, there is just intense bone trauma and inflammation, among rips and tears, so I could do extensive damage that, of course, I do not want.”

“So, this is a dance for everyone that has tried and hoped they could do more, but also, the power in realizing it’s time to walk away,” she continued. “I am so, so grateful to be able to do one last gentle dance.”

Blair’s fellow contestants wiped tears from their eyes as she and Farbe stood in the middle of the dance floor for one final performance. When it was time to offer their scores, the judges awarded the pair a row of 10s, giving them their first perfect score of the season.

As they say in show business, the show must go on, and while fans are devastated to see Blair bow out of the competition early, the battle for the Mirrorball Trophy continues as new episodes of Dancing with the Stars air Monday nights on Disney Plus at 8 pm ET or 5 pm PT.