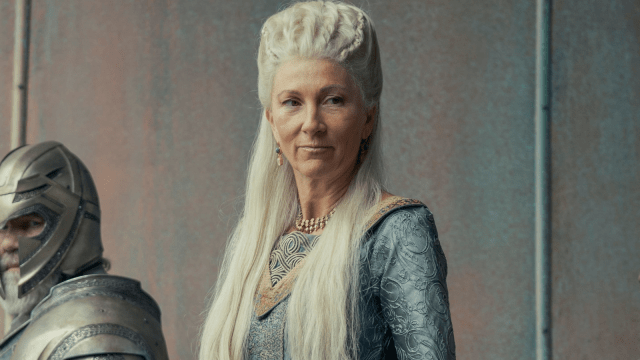 This article contains spoilers for the ninth episode of House of the Dragon.

The final installment House of the Dragon‘s first season is almost here. The last episode of HBO’s Game of Thrones prequel series, “The Green Council,” finally kicked off the Dance of the Dragons following the death of King Viserys. The Greens, which are made up of the immediate family of Alicent Hightower, swiftly went to work installing her son, Aegon, as the king, imprisoning anyone loyal to Rhaenyra Targaryen (Emma D’Arcy), including Rhaenys, aka the Queen Who Never Was.

During the episode, Rhaenys manages to escape her imprisonment with the help of a knight of the Kingsguard. Later on, when Aegon is being crowned as king, she takes the opportunity to steal back her dragon, Meleys, before most likely returning to Dragonstone to warn Rhaenyra of their plans for killing her family and of how they have usurped her. To escape, she chose a very public route, crashing through the floor of the Dragonpit with Meleys and killing a number of citizens.

Both she and Meleys came face to face with the entirety of the Greens after she had been imprisoned by them. Fans threw up their hands at Rhaenys for not taking the opportunity to yell dracarys and burning them all alive, which would have ended the upcoming war right as it started. We previously wrote about how the writers of House of the Dragon explained why Rhaenys showed restraint at that moment. Let’s take a look at the history of Westeros, and why there may have been a better reason why she did not turn them all into some barbecued greens.

Why did Rhaenys show restraint toward the Greens?

It is obvious that Rhaenys could have set the entirety of the Hightower family alight in the ending scene, but she didn’t. One reason the writers claim she showed restraint is that the fight simply was not hers to fight. This is true. Eve Best, the actress who portrays Rhaenys, has also said that Rhaenys saw Alicent as a mother when she defended Aegon and that is why she chose not to burn them, which also could be true. Let us say that Rhaenys did burn the Greens alive, would this have been the best move for her at that moment? Probably not. If she did take the opportunity to burn them alive a stray Kingsguard or member of the City Watch may have been able to kill her while she was on her dragon’s back. If she did manage to get away it would be assumed that she would be applauded upon her arrival at Dragonstone, but this might have worsened Rhaenyra’s position as heir, albeit not as much as the Greens have by usurping her.

As has been proven time and again in both Game of Thrones and House of the Dragon, alliances can prove to be fickle in the world of Westeros. If Rhaenys had taken the opportunity to burn them, there is a good chance that Rhaenyra could have used the situation to weaken Rhaenys’ standing. After all, she would have been killing the king unprompted to onlookers, and being a kingslayer demands consequences in most situations. If Rhaenys had been executed for her actions, Rhaenyra could have had King’s Landing, Dragonstone, and Driftmark under her control with nobody around to take them from her.

If you look back at the history of the Targaryen dynasty as documented in the source material, George R. R. Martin’s Fire and Blood, it is plain to see that some Targaryens are more ambitious than others. Maegor the Cruel was called that for a reason, killing many people including Maesters and his own nephews to secure his cause. While it is unlikely that Rhaenyra would have killed Rhaenys, as she more than likely would have been happy just living with her grandchildren, it is not beyond consideration.

Rhaenys also would have been summoning the wrath of the entirety of Oldtown had she killed the Hightowers. Before the reign of King Jaehaerys, Westeros had a problem with the Warrior’s Sons of the Faith Militant rebelling. This was after the High Septon at the time had proclaimed that the Targaryens broke the Faith of the Seven by committing incest and taking multiple wives. The Hightowers were the Lords of Oldtown, and they were usually deeply embroiled in the Faith. Therefore if Rhaenys had burned the Hightowers, it would most likely have caused the Faith to rebel once again.

This would have proved to be more trouble for Rhaenyra than for Rhaenys as she not only has children who are bastards from Ser Harwin Strong (Ryan Corr), but she also wed her uncle, Daemon Targaryen (Matt Smith), after faking the death of her last husband, not that it was public knowledge. Therefore it might have either resulted in the deaths of some of the Targaryens, which now included Rhaenys’s grandchildren, or Rhaenyra would have killed Rhaenys in an attempt to quell the Faith for the murder of the Hightowers.

There is also the possibility that Rhaenys wanted one of two things from the Greens. Possibly she saw the war that was coming and wanted to go back to her granddaughters. At that moment, she decided to show restraint in an act of mercy, hoping that would then be shown to her kin when the time came. Another theory is that she didn’t intend to kill them in the first place, and she came out of the floor to scare them. While the Greens do have dragons, so do the Blacks. If the Greens suddenly were to become very aware of that fact, it might have dissuaded them from starting the war.

In fact, there is a quote from Fire and Blood which shows this perfectly, although it is taken from earlier chapters and is referencing King Jaeherys. “Show them a dragon, aye. They will remember. Speak openly of burning down their halls…and you will only inflame them and set their hearts against you.” In that instant, this is the feeling which should have gone down the spines of everybody present for the ceremony. She did not burn them all to a crisp, but she could have. Based on everything we know about the Dance of the Dragons, they do not heed her warning.

Get ready to see Rhaenys report back to Rhaenyra when the Dance of the Dragons truly begins this Sunday in the season finale of HBO’s House of the Dragon.