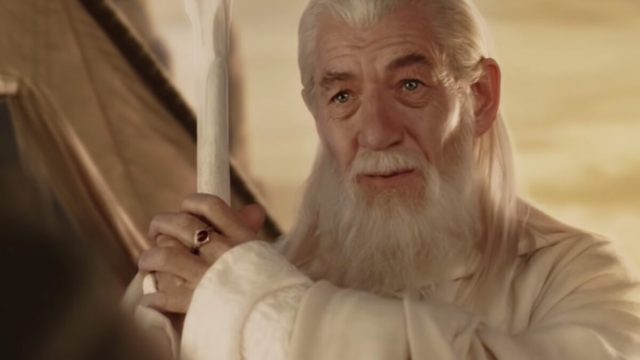 Photo via Lord of the Rings: Return of the King

Gandalf is one of the most important characters in J.R.R. Tolkien’s Middle-earth mythology and a fan-favorite, but will he appear in The Lord of the Rings: The Rings of Power? The wizard was famously played by Ian McKellan in Peter Jackson’s The Lord of the Rings, and played a crucial role in winning the War of the Ring against Sauron’s evil forces. Rings of Power is a prequel series, however, and while there will be familiar LOTR characters, not every character will be featured in it.

At the beginning of time, Gandalf was created by the deity Ilúvatar as the wisest of the Maiar, these were primordial spirits who wielded great power. His original name was Olórin, he was associated with light and fire, and he served the Valar: Manwë, Varda, Irmo, and Nienna in earlier times. He was considered Nienna’s best pupil and she taught him lessons in many areas including pity and patience, which are evident in his relationships with the races in Middle-earth throughout his story.

Gandalf also loved the Elves and walked with them without their notice. He would wear Elven guises and granted them visions that gave them knowledge as well as uplift them in their times of need. He was known to them as Istari, which were angelic spirits sent by the Valar and dearly beloved by them, but wizards weren’t just dispatched for common problems. Times had to truly be dire for wizards to fully involve themselves in the affairs of Middle-earth, and that time came when Lord Sauron arrived.

He was one of five wizards sent to Middle-earth to save the Free Peoples from darkness, but Gandalf was unsure of himself at first. Manwë had to convince him to fight to move past his fear and do what’s right and the wizard eventually obliged. He arrived in Middle-earth around the same time the Necromancer appeared in the Mirkwood, which makes Gandalf’s first appearance in the Third Age.

Rings of Power takes place during the Second Age, so it’s not likely Gandalf will appear in the series — but that’s not to say he couldn’t appear in another form. Since Olórin has been around since the beginning of time, it’s possible to see the story involve him in his earlier form with the Valar.

There will be five seasons of Rings of Power, and although it appears to be focused exclusively on Middle-earth, there’s no telling where the story could go, or where the story will end. Gandalf and Galadriel have a vital relationship prior to The Hobbit and Lord of the Rings when the White Council — consisting of Elves and Wizards — is put together to decide what should be done about Sauron and the Rings of Power, and fans would surely love to see this fortuitous meeting onscreen.