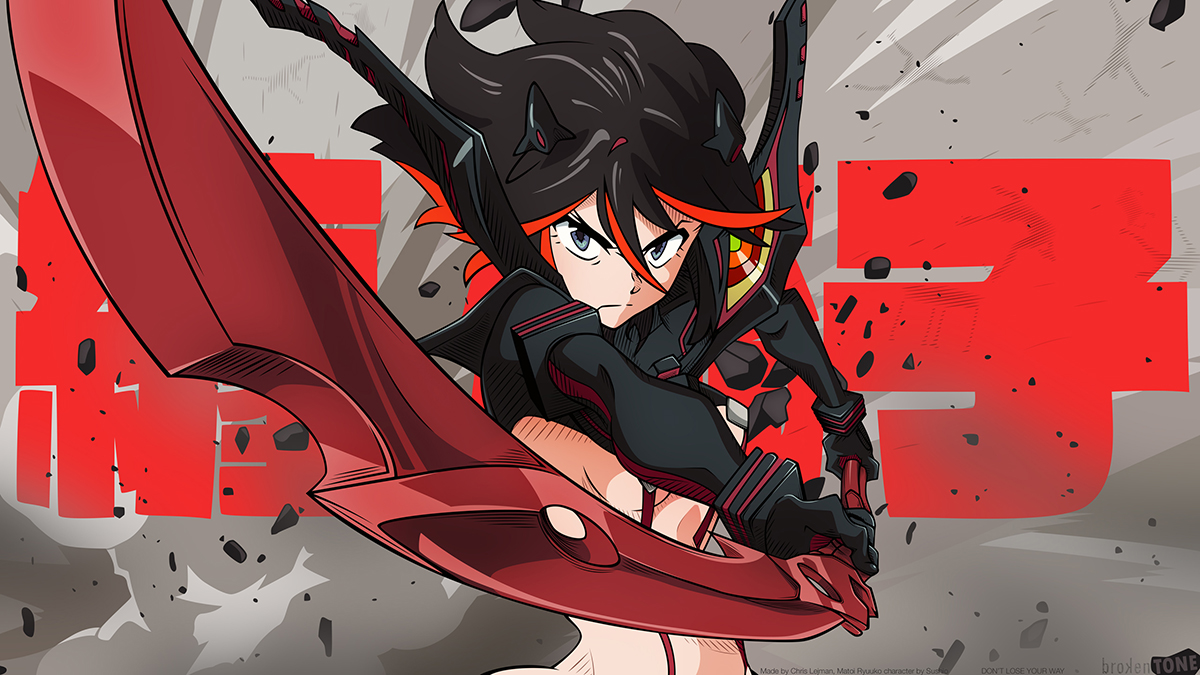 Kill la Kill is a female-dominated anime that led to a manga of the same name, as well as a video game called Kill la Kill the Game: IF. Unlike most anime, where tough men are out fighting to death, this anime shows the power of the female gender. The main protagonist and antagonist are both females – mother and daughter – and both are extremely powerful.

The plot begins six months after the death of Isshin Matoi, when Ryūko Matoi enrolls in the Honnōji Academy to find the person responsible for her father’s murder. The only clue she has to go on with a red sword that resembles half a pair of scissors. The person who killed her father took the other half of her father’s unique sword.

Most of the main characters have been altered with an alien life form called Life Fibers, making them superhuman, and the anime also features uniforms that can make a person more powerful. Life Fibers’ DNA is fused with clothing to give people a significant power boost and special abilities when wearing the super-powered clothing. They’re all strong in their own unique way, but today we’re counting down the most powerful characters in Kill la Kill.

Mako is many viewers’ favorite character and serves as one of the main characters of the anime series. She is the best friend and love interest of protagonist, Ryūko, and always has her friend’s back. Although she is extremely hyper and eats a lot, Mako also likes to sleep and will often sleep during class.

Although not powerful physically, Mako has the ability to help others believe in themselves, like she did with Ryūko. When wearing one of the life fiber-altered uniforms, she can deliver powerful kicks to her opponents. Her uniform also consists of a baseball bat spiked with nails that can also fire missiles. Her punch is powerful enough to leave a giant crater in the ground and send people flying from the shockwave.

Nonon is one of Honnōji Academy’s Elite Four and a member of just about every club at the school. She is very arrogant and bossy. One of her natural abilities includes creating a forcefield around herself during battle. As someone who enjoys listening to music during battle, with her super powered uniform, she turns into a massive speakers with the ability to fire of a reverberating bass to damage her opponent.

Shiro is a member of the student council and president of the Sewing Club at Honnōji Academy. He is the developer of the super powered uniforms worn by the students and is an expert when it comes to knowledge of the Life Fibers. As an expert, he also knows all the Life Fibers’ weaknesses.

Hōka helped design the super powered uniforms worn by the Honnōji Academy’s elite students. He is a member of the school’s Elite Four and is highly intelligent. He is an expert at hand-to-hand combat, and is able to use his high intelligence to finish a battle with a single strike to the right part of the body.

As skilled as he is, he would rather be analyzing data than fighting, so he will willingly give up a fight to protect his information.

Ira is one of Honnōji Academy’s Elite Four, serving as Satsuki’s enforcer, titling himself Satsuki’s “Impenetrable Shield.” Although he is tough as nails, he shows a soft side and does not harm innocent people. He possesses superhuman strength, even without his super powered uniform.

Uzu is one of Honnōji Academy’s Elite Four and wears a special uniform that transforms into a hulking green suit of armor. He possesses the ability to sense his opponent’s attack. He attaches multiple shinai blades to his hands, spinning and hitting his opponent quickly and efficiently.

Nui is the secondary antagonist of the anime and the person responsible for the murder of Isshin Matoi, which set the storyline into motion. Although she resembles a human, she was grown by Ragyō using Life Fibers. Her cute and innocent demeanor masks the evil inside her. She wears a purple eyepatch to cover the eye she lost in battle against Isshin. When she is wounded or outmatched in battle, she becomes more aggressive and even more deadly.

Satsuki is Ragyō’s eldest daughter and Ryūko’s sister who serves as antagonist, anti-hero and then deuteragonist in the anime. She is the president of the school’s student council and rules things with an iron fist. Although she rarely smiles, she does have a softer side, especially compared to her mother.

Before Ryūko showed up at the academy, Satsuki was the most powerful person at the school. She is said to have taken down 500 men on her own.

Ragyō Kiryūin is Ryūko’s mother, torturer and the main antagonist of the anime. She is arrogant and cruel, with little to no redeeming qualities, but she’s also extremely powerful.

Do to numerous experiments on herself with Life Fibers, she has superhuman strength, speed, reflexes, durability and regenerative abilities. She carries a pair of life fiber-created swords that can cut through any other life fiber.

Ryūko is the main protagonist of Kill la Kill, who enters Honnōji Academy six months after the death of her father to find out who murdered him and avenge him. She wields a red sword that resembles half a pair of scissors. Nui, the person who murdered her father, wields the other half of the sword.

She enters the school ready to fight anyone who gets in her way and is already powerful thanks to the Life Fibers fused with her body by her mother as an infant. She grows even more powerful after a sentient lifeform named Senketsu attaches itself to her.

She gains another power-up after defeating Nui Harime and taking the other half of the scissor blade back from her father’s killer. She was able to defeat every antagonist in the series.