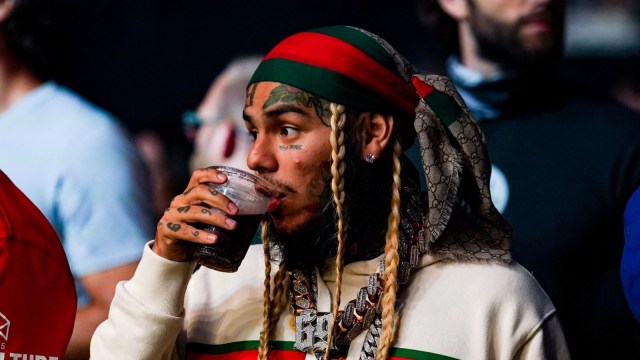 The Ye ship may be sinking and on fire after the rapper’s recent antisemitic ramblings, but it appears he still has some supporters out there, though at this point he’s scraping the bottom of the barrel when it comes to those who’ll defend him. Rapper and FBI informant 6ix9ine (aka Six Nine / Tekashi69) has appeared on notorious internet misogynist Andrew Tate’s podcast to bolster the beleaguered star, saying:

“He’s standing on business. I love Kanye. I love what he stands for and he does whatever the **** he wants. When there’s millionaires, billionaires, trillionaires in your ear and they say “Kanye this is not the respectful thing”. He worked himself so high that he doesn’t have to bow down to a dollar.”

6ix9ine went on to talk about taking $95,000 from a Russian business to play a game of FIFA against him but added:

“I feel where Kanye’s at he doesn’t have to bow down to masses. He says whate he wants, whenever he wants. and I feel like Kanye is not crazy, he’s speaking his ****ing mind.”

Andrew Tate then blew a humungous dog whistle by wondering why “the people who are especially in charge of the entertainment industry” are so scared of Ye. 6ix9ine replied:

“Because they’re sheep. It’s all about relationships. It’s all about shaking the right hand. It’s about ‘I’ll scrub my back I’ll scrub yours’ It’s just sheep bro. I gotta be honest with you, I’m so ****ked up right now I just faced a whole bottle of Beluga but I’m holding back from a lot of ****.”

Well, we’re just glad 6ix9ine is still providing the scintillating and incisive commentary on current events that he’s so famed for.

With Ye reportedly no longer a billionaire after his business partners abandoned him in the wake of his vow to go “Death Con 3” on Jewish people, it’s worth wondering what the future holds. Right now, he’s radioactive to businesses and is even facing calls for his music to be removed from Spotify.

The only option left to him is to go hard into far-right media, though given his propensity to say the quiet part as loudly as possible, we suspect his future is more NewsMax than Fox.