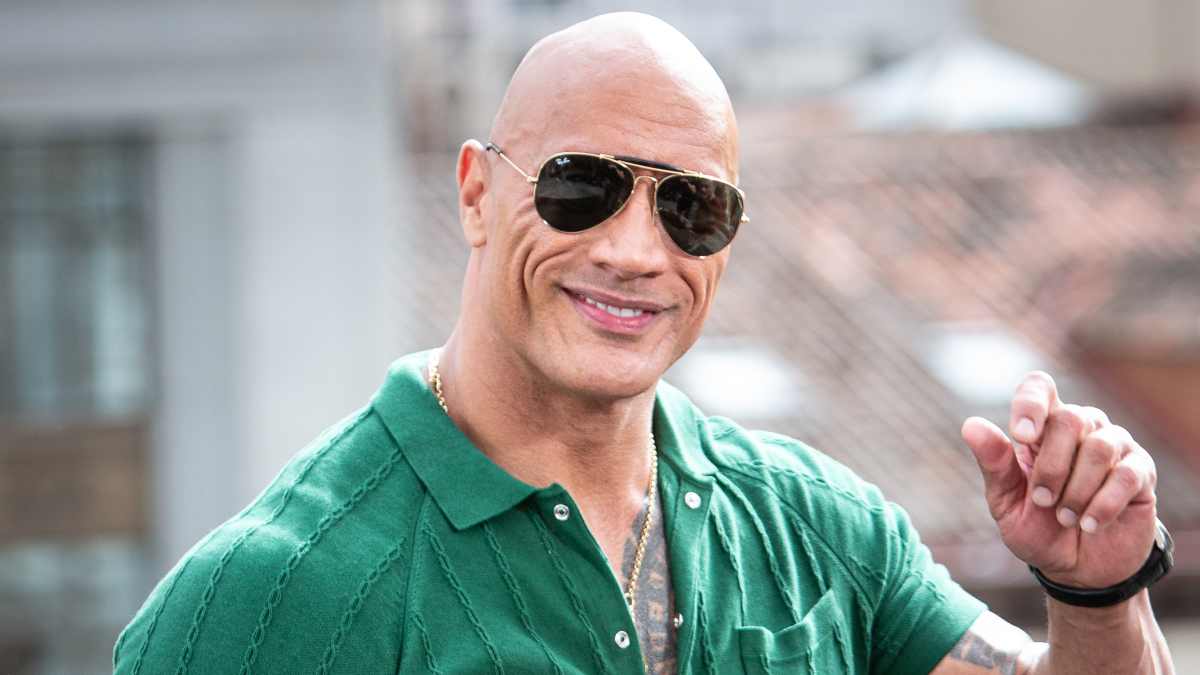 Dwayne Johnson has made his ambitions to join the MCU clear.

He even outlined the character he’d be most interested in playing nearly a decade ago. His official superhero debut, in the form of DC’s Black Adam, hasn’t gone over particularly well with audiences, and it seems that Johnson has his sights set on greener pastures. The MCU has plenty of space for a star of Johnson’s charisma and style, but quite a few of the best Marvel heroes have already been claimed. Johnson expressed his interest — in a 2013 tweet — in taking on the character of Luke Cage, but that role is already spoken for. There’s no concrete confirmation that Mike Colter, from Netflix’s run of Luke Cage, is set to return alongside Charlie Cox, but fans are holding out hope. Colter’s performance in the role was widely adored by audiences, and seeing a new face take on the character, so soon after Colter, would feel wrong.

With this in mind, we’ve got a few alternative options for Johnson. He might not get his wish in playing Luke Cage in an MCU release, but we think he’d suit these alternate roles perfectly.

Despite the already-beefy ranks of heroes lining the MCU, there remain a wealth of characters ripe for the picking. Literally hundreds of Marvel characters have yet to enter the MCU, and any of these could provide an excellent opportunity for Johnson to make his big Marvel debut. We think a few would suit the actor better than any others, given his proclivity for the same general character archetype. We love Johnson and every bit of personality he brings to the screen, but we also must be honest in admitting that the man’s range is about as broad as his big toe.

The character he plays in pretty much every movie is certainly engaging, and he’d fit into the MCU wonderfully. Masculine, charming, and a bit bumbling, Johnson’s typical approach does limit his character options somewhat, but thankfully Marvel has plenty to choose from. The below list is colorblind, because it’s 2022 and we’re not looking for the whitewashed ’60s to return, so keep your complaining to yourselves.

The Silver Surfer has already made a big screen debut, but it was before the days of the MCU. Back in 2007, the character was played by Doug Jones — but voiced by Laurence Fishburne — in Fantastic Four: Rise of the Silver Surfer, just a year before the MCU released its inaugural film.

A return to this character could serve the MCU well. Attempts to bring the Fantastic Four to live action have thus far failed rather spectacularly, even with stellar actors at the helm, which makes many viewers leery of the team—as well as their main villains. The Silver Surfer’s attachment to Galactus, however, could provide an avenue to introduce the world-ending baddie. Plus, news of a fresh — and hopefully far more successful — attempt to bring the Fantastic Four into the MCU fold could provide the perfect opportunity to paint Johnson silver and set him loose on the big screen as the cosmically-enhanced Norrin Radd.

The baffling, but somehow fitting, choice to cast Nicolas Cage as Ghost Rider earned 2007’s Ghost Rider a rotten score on Rotten Tomatoes, and gave most audiences a very specific idea of the character. Johnson could provide a thoroughly separate interpretation of the character, should he choose to take up the fiery mantle, and in the process could reintroduce a very cool character into the MCU.

Ghost Rider has the potential to be an engaging and intriguing character, but also runs the risk of coming off very lame. Few things that Johnson sets his sights on come out lame — they might come out bad, but rarely lame — and his involvement in a fresh Ghost Rider interpretation could be the best shot the MCU has to give the character a second wind. Ghost Rider’s status as a devil-bound motorist, and his tendency to veer between good and bad, provides the MCU — and Johnson — with the flexibility to make the character into something modern, fun, and new. Johnson’s presence and humor could also lend well to the character, despite the disappointing inability to don his preferred khaki shirt.

He’s not as well known as the Silver Surfer or Ghost Rider, but Nova could serve as a perfect fit for Johnson. He’s overpowered, a bit deadpan, and just a bit of an asshole. While Johnson rarely leans into abrasive or rude characters, he might find a nice — albeit minor — challenge in a character like Nova, whose arrogance and dismissiveness often shields a far softer nature underneath. In Johnson’s hands, and with the right director at its helm, a Nova introduction could add just the right flavor of overpowered drama into the MCU.

The stage has also already been set for Nova’s entrance into the cinematic universe. It was little more than a background note to many viewers, but back in Infinity War, Nova’s home world came up in conversation. He comes from the planet Xandar, one of the worlds Thanos hit before coming up against the Avengers, and this detail allows for a thoroughly interesting entrance for the character. It would entirely depend on if the MCU decided to highlight Rhomann Dey or Richard Rider, but either way the Superman-adjacent character would be a fun addition.

Another character that leans into the overpowered masculinity that Johnson seems to enjoy so much, Hyperion presents several different potentials for Johnson. Should he wish to return to the stylings of Black Adam — a project he was singularly excited for, despite its performance — he could play the character as a villain, or even an anti-hero, or he could ditch the grey area and go straight hero.

That’s because several versions of Hyperion — and most Marvel heroes — exist in the multiverse. The character is an Eternal, and thus could join the ranks of the existing MCU Eternals, or he could pit his might against them, should an alternate version of the character instead debut. His status as an Eternal gives Hyperion all the classic superhero traits (superhuman speed, durability, reflexes, stamina, the power of flight, etc) and the character’s clear ties to DC’s superman could provide a stellar opportunity for the MCU to poke fun at their comics counterpart, and the many struggles it’s had in mimicking the success of the MCU.

Johnson typically plays the leading man, but why not give the man a chance to play a proper villain? Black Adam was teased as an anti-hero, but largely failed to deliver on this promise, so Johnson might jump at the opportunity to lean into his vicious side.

Michael Korvac would serve as the perfect precursor to the official introduction of Galactus. Formerly a normal man, he became a villain after a horrendous alteration connected him to a high-powered computer that gives him the ability to connect with, and syphon, virtually any power source. It is his syphoning of power from Galactus’ ship that truly makes Korvac into a villain to be reckoned with, providing the character with the ability to teleport, project energy, alter matter, and manipulate time and space. These traits make him a uniquely powerful foe, and could allow him to serve as an introduction to the might of Galactus.

The MCU is already rife with various alien races, so why not add another into the mix? The Shi’ar Empire is most commonly associated with the X-Men, and news that mutants are officially entering the MCU provides just the right opportunity for Gladiator to make his big entrance.

This character, perhaps more than any other on this list, suits Johnson perfectly. His powers are tied to his confidence, and there are few men out there who can boast the levels of confidence of our own Flex Kavana. A Strontian living under Shi-ar rule, Gladiator — whose real name is Kallark — requires dedication and purpose to truly qualify as a superhero. He boasts all the classic superhero powers, like super strength, durability, and the power of flight, but can only access these powers when he’s utterly devoted to a cause. The more confident he is, the stronger he gets, but any damage to his bravado takes the character down several pegs.

It’s a bit late to introduce him via 2023’s The Marvels, but that doesn’t mean there isn’t space for Blue Marvel in the MCU. The character is classic Johnson, with a background that even shares some similarities with the pro-wrestler-turned-actor. A former athlete and eventual soldier, Adam Brashear doesn’t become a superhero until a bit later in life. Considering the wealth of teenaged superheroes already drenching the MCU, an older, more experienced addition would be welcome.

Blue Marvel derives his power from the Negative Zone, an antimatter universe most closely associated with the Fantastic Four and Captain Marvel, and thus could get at least a nod in one of the MCU’s planned upcoming films. This introduction might just pave the way for Johnson to step into the role of Adam Brashear, a relatively plain — perfect for Johnson — but reliable superhero boasting all the classic powers on top of molecular manipulation and bioluminescence.

This character’s origin story has the charm and humor to perfectly suit Johnson, though the likely reliance on a fat suit probably isn’t the best approach. If the MCU could figure out a way to pull off an initially overweight, middle-aged average Joe, however, the Sentry could be the absolute best Marvel role for Johnson.

Another character sporting classic god-like abilities, the Sentry is unique in a number of ways. His connections to another universe — and numerous Marvel storylines, including Secret Invasion and Dark Avengers — poise him as an excellent supplemental character à la Black Widow. Natasha Romanoff appeared in a huge number of Marvel movies before she ever got a solo film, but rarely as a leading character. This might be the correct way to approach the Sentry as well — allowing him to gradually weave his way into existing storylines, before eventually helming his own release.

The character has rubbed elbows with nearly every Marvel character out there, and that presents endless potential for his future in the MCU. A super soldier serum far more powerful than the one given to Steve Rogers provides Bob Reynolds with mind-boggling strength, telepathy, and near-omnipotence, as well as invulnerability. He’s fought the Hulk to a stalemate before, and effortlessly took down Carnage, Thor, and is even on par with Galactus. My guy might just be the most powerful hero Marvel has to offer, and that makes him an easy choice for Johnson.