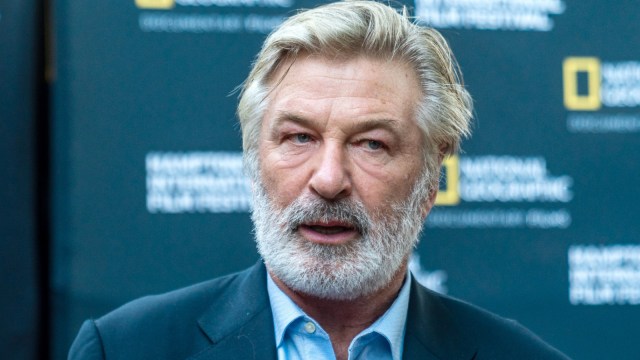 Alec Baldwin just can’t stop volunteering his thoughts about the fatal shooting of Rust cinematographer Halyna Hutchins and, in turn, somehow making it all about himself. And in a new interview on Tuesday morning, the man who literally pulled the trigger admitted that he feared for his own life in the aftermath of the shooting due to comments made by former President Donald Trump.

Speaking to CNN’s New Day, Baldwin lamented that the incident has “taken years off his life” and claimed to have lost five jobs since Hutchins died last October.

“I got fired from another job yesterday,” he said while calling into the studio. “There I was all set to go to a movie, jump on a plane … I’ve been talking with these guys for months, and they told me yesterday we don’t want to do the film with you because of this.”

But Baldwin’s woes really went into overdrive when he was attacked by Trump just weeks after the incident. The 64-year-old actor and former Celebrity Apprentice host have been at odds with one another since Baldwin’s long-running Saturday Night Live portrayal, which conveniently never seemed to bother him before. But Trump’s remarks, while unquestionably disgusting, were also pretty much par for the course.

“The former president of the United States said, ‘He probably shot her on purpose,'” Baldwin recalled in a segment of the interview obtained by TMZ. “To me, was really the only time that I was worried about what was gonna happen.”

“Because here was Trump, who instructed people to commit acts of violence, and he was pointing the finger at me and saying I was responsible for the death,” he continued. “One thousand percent I’m nervous that a bunch of people who were instructed by the former president to go to the Capitol — and they killed a law enforcement officer.”

“They killed somebody,” he added. “And you don’t think that I think to myself, are some of those people gonna come and kill me?”

No, Alec. Trump supporters were never going to come kill you. Trump supporters stormed the U.S. Capitol because they were frothed up into believing that Democrats had stolen the election. None of them care about Alec Baldwin beyond the entertainment value of whatever comes out of the man’s mouth.

You do have to wonder, of course, what Hutchins’ family — who is already suing Baldwin — thinks when they hear these remarks, though.

Baldwin was invited onto the show to discuss possible charges from the shooting, as prosecutors are currently awaiting the investigative report from the Santa Fe Sheriff’s office to determine whether or not a crime occurred. Though Baldwin still places the blame on props assistant Hannah Gutierrez Reed and assistant director Dave Halls, he doesn’t believe that anyone involved will be charged.

We will certainly see.