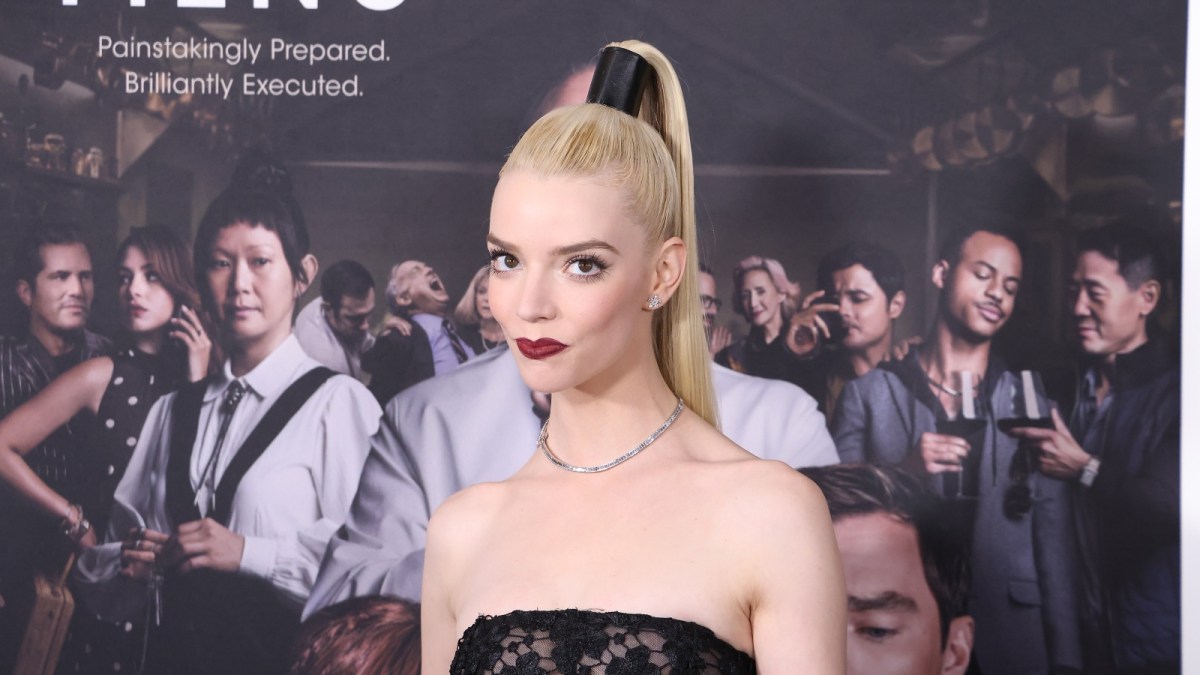 At just 26 years old, there are few actors that can boast the versatility, charm, talent and charisma that Miami-born Anya Taylor-Joy possesses. Born and raised in both Argentina and London, Taylor-Joy pursued acting from the ripe age of 16 onward, landing small television roles in productions such as Endeavour, Viking Quest and Atlantis. It was announced earlier this year that Taylor-Joy would be voicing Super Mario‘s beloved damsel in distress, Princess Peach, in the upcoming The Super Mario Bros. Movie alongside co-stars Chris Pratt (Mario), Jack Black (Bowser), and Keegan Michael-Key (Toad). From what we’ve seen in the most recent trailer, Princess Peach isn’t the helpless royal that we’ve come to know; she’s fearless and independent, deviating from the impression of her character that gamers are familiar with.

Much more than a one-trick pony, there are countless projects that one will recognize Taylor-Joy from, especially her earlier works. She’s found a one-way ticket to stardom in recent years, landing bigger roles than ever before, but she’s the sort of actress who never forgets her roots, remaining humble as she surpasses others of her calibre to quickly become one of the most successful, influential, respected, and iconic actors of our generation. Before she makes a legacy for herself as the first-ever live-action Princess Peach (her second voice role since Playmobil: The Movie), let’s take a stroll down memory lane to remind ourselves of Anya Taylor-Joy’s best performances to date.

Although British crime-drama Peaky Blinders ran from 2013 to 2022, Taylor-Joy didn’t join the ensemble cast until 2019, when the show aired its fifth season. She portrayed Gina Gray, who was described as the “scheming wife” of Michael Gray. Throughout season 5, Gina manipulates Michael into mistreating and deceiving Tommy, but eventually, Michael and Gina are banished and told to never return.

Alongside Michael, Gina serves as the overarching secondary antagonist in seasons 5 and 6. Michael is shot in the head by Tommy and killed, but it is unclear whether or not Gina is informed of this. To quote the incomparable Taylor Swift, Anya Taylor-Joy in Peaky Blinders is “so bad, but she does it so well.” She might not stick around for long, but Gina Gray leaves a long-lasting impression on Tommy and the Shelbys.

One of her most recent roles, Taylor-Joy joins Alexander Skarsgård, Nicole Kidman, Claes Bang, Ethan Hawke, Björk, and Willem Dafoe in The Northman, which is based on the legend of Amleth and Norse mythology and tells the story of a Viking prince seeking to avenge his murdered father. Taylor-Joy portrays Olga, a Slavic sorceress of the Birch Forest and Amleth’s lover. Despite a convincing premise, The Northman failed to break even at the box office with a budget of $70-90 million against a $69.6 million profit.

Regardless, Anya Taylor-Joy delivers a heart-wrenching performance as the troubled lover of Amleth and the bearer of his children. In the end, it’s Taylor-Joy and Skarsgård’s chemistry that makes The Northman so gripping and powerful. Without either of their stand-out performances, Robert Eggers’ historical action-thriller might have flopped even harder.

Anya Tayor-Joy leads an ensemble cast of teenage mutants — Mirage, Wolfsbane, Cannonball, Sunspot, and Magik — as they undergo treatment at an institution for the gifted that will cure them of their mutations. However, the mutants grow wary of the higher power that keeps them imprisoned and their terrifying memories begin to merge with reality. Despite carrying the label of a Marvel production, The New Mutants was a box office disaster, not even reaching $50 million against a $67-80 million budget — not to mention the criticism and backlash it received.

Taylor-Joy’s character, Magik, sparked controversy for her racist and inappropriate comments toward Dani Moonstar, aka Mirage, played by Blu Hunt. Dani is an Indigenous character, so Magik implying sexual assault and poking fun at Dani’s heritage was a big no-no. Although Taylor-Joy is beyond magical as Magik, she was a victim of circumstance in that Josh Boone completely failed these characters.

Paired with Thomasin McKenzie, known for Jojo Rabbit and Old, it wasn’t surprising that Anya Taylor-Joy fed off the energy provided by her co-star. Last Night in Soho is a psychological thriller about an aspiring fashion designer able to transport herself between the 1960s — where she meets a wannabe singer — and the present day. It becomes clear that Ellie (McKenzie) and Sandie’s (Taylor-Joy) lives are intertwined somehow, but their mysterious pasts are masked by a pretense of glitz and glamor that suggests all is well.

Once again, Taylor-Joy’s performance is overshadowed by a definitive box office failure, but that doesn’t disregard her undeniable talent and finesse in portraying Sandie, whose character is demoted to a supporting role in favor of McKenzie’s Ellie. Still, Taylor-Joy manages to make Sandie her own, breathing life into this portrait of a beautiful, successful, and unstoppable woman who — despite suggestions to the contrary — isn’t living the life she had hoped for.

Based on Jane Austen’s 1815 novel of the same name, Emma follows Emma Woodhouse (Taylor-Joy), an elegant and wealthy young woman living in Regency-era England whose pastimes include matchmaking and meddling in the love lives of those around her. Joining Taylor-Joy is Johnny Flynn, Josh O’Connor, Callum Turner, Mia Goth, Miranda Hart, and Bill Nighy. After Mr. Knightley, whom Emma has developed romantic feelings for, returns her affections and shares hopes of marriage, Emma worries what Harriet (whom Mr. Knightley proposed to first) will think and develops a nosebleed.

Interestingly, Taylor-Joy was so emotionally invested in the scene that her nose actually started bleeding and while the crew were concerned, Taylor-Joy insisted that they roll the cameras and capture the rare moment. If that isn’t dedication, nothing is. She received a nomination for Best Actress – Motion Picture Comedy or Musical at the 78th Golden Globe Awards but lost to Rosamund Pike as Marla Grayson in I Care a Lot.

One of the biggest selling points for Split is Anya Taylor-Joy’s on-screen chemistry with James McAvoy. In the film, McAvoy portrays a man with a dissociative identity disorder and adopts more than 20 different personalities, including that of a nine-year-old boy named Hedwig. Along with Claire and Marcia, Casey’s friends, James McAvoy’s Kevin kidnaps Casey (Taylor-Joy) and imprisons her underground.

McAvoy and Taylor-Joy share a lot of intimate scenes together, but their emotional investment in these characters is what makes their exchanges so moving. Split was an incredible box office success, grossing a staggering $278.5 million against just a $9 million budget. Although Taylor-Joy didn’t win any awards, it isn’t the accolades that attest to her talent, but rather the impact she has made as Casey in M. Night Shyamalan’s Unbreakable trilogy — which includes Unbreakable, Split and Glass.

Marking Taylor-Joy’s film debut, Robert Eggers’ The Witch ended up being far more successful than The Northman, both in terms of Eggers’ directing and Taylor-Joy’s acting. That’s not to say that her performance in The Northman was bad, but her turn as Thomasin in The Witch was just so much better. Co-starring Ralph Ineson, Kate Dickie, Harvey Scrimshaw, Ellie Grainger, and Lucas Dawson, The Witch follows a Puritan family who encounter malicious supernatural forces after their youngest son, Samuel, mysteriously goes missing.

It turns out that Thomasin is the real threat to the family’s safety and sanity, but Anya Taylor-Joy’s gradual progression from sweet and innocent farm girl to full-fledged witch is beyond comprehension. There’s credit due to Taylor-Joy’s co-stars, whose individual performances carried the folk horror to even greater heights, but if it weren’t for her unnerving presence and soulless eyes, Anya Taylor-Joy wouldn’t have sold many viewers on The Witch like she did.

There was no denying it. The Queen’s Gambit took Anya Taylor-Joy’s career to a whole new level. Debuting on Netflix in 2020, The Queen’s Gambit follows Beth Harmon, a chess prodigy who’s fighting for the title of champion whilst dealing with drug and alcohol dependency and troubles with her home life. After just four weeks, The Queen’s Gambit had become Netflix’s most-watched scripted miniseries, even increasing the public’s interest in the board game, which has existed for centuries. Critics held much praise for Taylor-Joy’s performance, which essentially carried the show.

Taylor-Joy won Best Actress – Miniseries or Television Film at the Golden Globes as well as the Screen Actors Guild Award for Outstanding Performance by a Female Actor in a Miniseries or Television Movie. Anya Taylor-Joy’s performance in The Queen’s Gambit is magnetic and the critics’ only gripe with her is that she was too good-looking to be portraying Beth, who’s conventionally ugly in Allan Scott’s book. If being too attractive is one’s only flaw, that’s a pretty good future ahead for a 26-year-old.