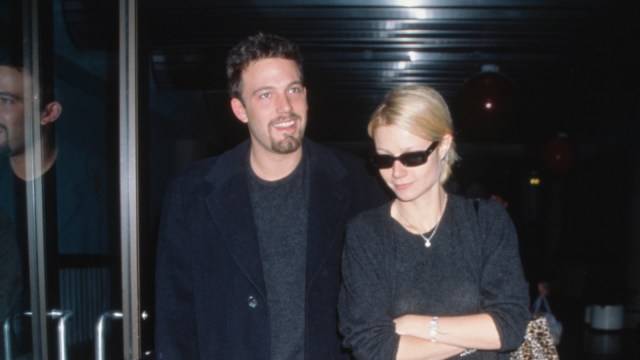 Gwyneth Paltrow, who famously consciously uncoupled from her former husband Chris Martin of Coldplay, had supportive words for another ex: Ben Affleck in his wedding to Jennifer Lopez.

Paltrow shared her thoughts on the nuptials on her Instagram story on July 22 while she was hosting a question and answer session with her followers.

“LOVE!!! SO ROMANTIC!!! VERY HAPPY FOR THEM,” Paltrow wrote. She also added that she was incredibly happy with her own husband television writer Brad Falchuk.

Affleck and Paltrow dated from 1997 to 2000. In a 2018 interview with the radio personality Howard Stern, she said learned a lot from the relationship.

“I think there’s certain boyfriends where you are trying to work stuff out, right? Like, you’re trying to heal certain stuff from your childhood and he was very much a lesson in that way. I’m not sure exactly what I was trying to heal in that instance, but it was … he was, you know. It was specific.”

The two have been on good terms since the breakup, with Paltrow even commenting on a meme of the two of them together. After their respective split, Affleck went on to marry Martin in 2003, and the couple had two kids before deciding to part ways in 2018. Affleck went on to marry Jennifer Garner in 2005 and had three children together before they broke up.

Affleck and Lopez got back together in May of last year after she broke it off with former baseball superstar Alex Rodriguez.

In her newsletter from April, Lopez described the moment that Affleck asked for her hand in marriage.

“Saturday night while at my favorite place on earth (in the bubble bath), my beautiful love got on one knee and proposed. I was taken totally off guard and just looked in his eyes smiling and crying at the same time. It was nothing fancy at all, but it was the most romantic thing I could’ve ever imagined …. just a quiet Saturday night at home, two people promising to always be there for each other. Two very lucky people. Who got a second chance at true love.”

The happy couple is reportedly going to continue the festivities with some of their original wedding plans 20 years later.