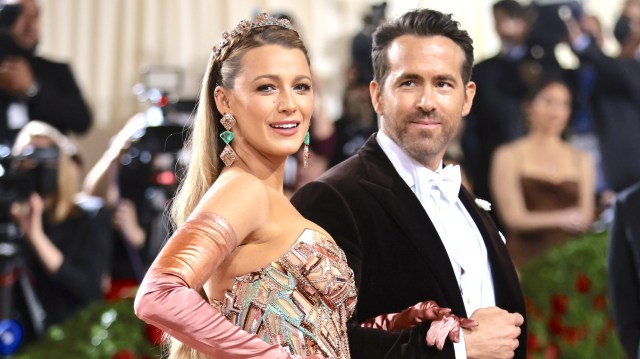 Why stop at three? Superstar actress Blake Lively is pregnant with her fourth child with husband Ryan Reynolds.

Lively, 35, made an appearance at the Forbes Power Women’s Summit on Thursday and gave everyone a glimpse of her new baby bump, according to E News!. She even made a cheeky joke about the whole situation, saying, “I just like to create. Whether that’s baking or storytelling or businesses or humans, I just really like creating.”

The new member of the Lively-Reynolds clan will join three other daughters: James, 7, Inez, 5, and Betty, 3. Lively and Reynolds tend to keep their daughters out of the spotlight, but that doesn’t mean they don’t take the time out of their busy schedules to gush about them.

“Having children for me made me feel so much more in my skin,” Blake told Forbes. “I never felt more myself or at ease in my own body or more confident — not to say that there aren’t a bevy of insecurities coming at me a million times a day, but I just feel incredibly settled.”

Reynolds also shared his thoughts about kids in a 2016 interview after the birth of the couple’s second child, calling the experience “amazing.”

“One of the most common things in the world is making out, having a couple of drinks, and then doing it, and then having a baby. I was perfectly sober for this one, though. I gotta say,” Reynolds said.

Lively and Reynolds started out as friends and even played love interests in the travesty that was the Green Lantern movie. They went on a double date with other people, and Reynolds said it was “the most awkward date for the respective parties because we were just like fireworks coming across.”

They married in 2012 at Boone Hall Plantation in Mount Pleasant, South Carolina where The Notebook was filmed.