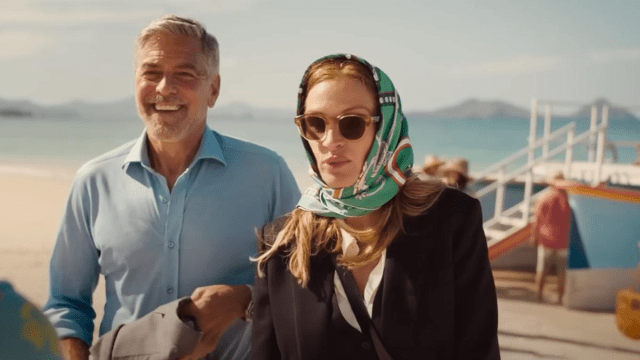 Hollywood A-List duo George Clooney and Julia Roberts have both said they would totally be up for doing a superhero movie together. The charismatic pair, commanding the best smiles in the industry between them, were at the premiere of their upcoming film Ticket to Paradise when the discussion of playing costumed crimefighters came up.

Roberts and Clooney are legends in the acting game, both rising to prominence at around the same time and often starring as heartthrobs, with Clooney playing the handsome Dr. Doug Ross on ER, and Roberts known for her numerous rom-com films such as Notting Hill, Pretty Woman, and Runaway Bride. They later moved on from these roles taking on more dramatic or action-laden productions with the two of them coming together in Ocean’s Eleven in 2001.

They are now back for their first rom-com together in Ticket to Paradise, playing a divorced couple who are forced to spend time with one another at their daughter’s destination wedding. It would seem that the pair are more than happy to team up once again though after an interviewer for Variety asked “when will you do a superhero (movie).” Roberts seemed more than thrilled at the idea, turning to her co-star and emphatically stating “wouldn’t it be awesome!” Clooney responded, “we should do one, you and me,” before turning and jokingly shaking his head at the camera.

Clooney has already played a superhero in his past, though many might want to forget his turn as the caped crusader in Joel Schumacher’s chaotic 1997 Batman & Robin. The experience seems to have given him PTSD, with Roberts teasing him about the now infamous role.

The interviewer continued down the superhero line of questioning asking Clooney, “who should she (Roberts) play, George?” Stumbling at the moment Clooney threw out “Wonder Woman,” with Roberts counteracting, “oh well is somebody… Gal is Wonder Woman.” Clooney quickly backpedaled saying, “yeah you wouldn’t want to take anyone’s job.”

They circled back to Clooney’s role as Batman when discussing the costumes, with Roberts claiming she might wear an apron over a cape leading the actor to add, “I had a rubber cape as Batman. It was rubber.” Roberts also seemed to have her own internal flashback to the film as she looks at the camera her eyes wide and joked, “that worked out,” with a large grin on her face. Who could ever forget those nipples on the iconic Batman suit?

Honestly, though, these two have great chemistry and throughout this interview, they were giving serious married superhero energy – think Mr. Incredible and Elastigirl from The Incredibles. Just as it’s refreshing to see a rom-com with an slightly older couple, it would be great to see a superhero blockbuster that follows heroes who have relationship issues, mortgage struggles, and kids to take care of, and these two would be the perfect fit.

You can catch them first in Ticket to Paradise, which will be released in theaters on Oct. 21.