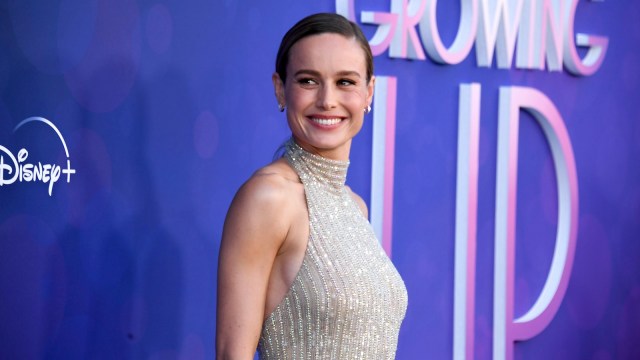 If you were ever wondering exactly what is on Brie Larson‘s mind as she walks the red carpet, you finally have an answer. The latest post on Larson’s Instagram account leaves little doubt about what she’s thinking of and no, it’s not what she’s wearing. It’s more like “When can we eat?”

The actor posted a pair of photos alongside Larson’s confession that it’s Tacos that are on her mind. Hey, a lady’s got to eat.

The pics appear to be taken at a behind the scene moment sometime the during the premiere of Disney Plus’ “Growing Up” held at NeueHouse in Los Angeles on Sept. 7 where the Marvels actor walked the red carpet in the same embellished halterneck jumpsuit by Valentino she’s wearing in her mirror selfie. Larson also wears almost no jewelry, highlighting the jumpsuit’s striking accessorized belt. She was styled by Samantha McMillen.

Growing Up was created by Larson and Culture House, a Black, Brown, and Women-owned production company. The docu-series features ten 30-minute episodes with each one focusing on a young 18 to 22-year-old “hero” and their experiences growing up, with a specific focus on the social and familial obstacles they have had to overcome. Larson also directed the first episode of the series.

This isn’t the first time Larson has alluded to her favorite comfort food, and she may even have recently outed her brand of choice. In June she teamed up with social media chef and An Unapologetic Cookbook author Joshua Weissman on her own YouTube channel to cook “Jack in the Box” tacos.

While admitting your love for the chain’s notorious ostensible “tacos” may seem like a jailable offense in Los Angeles, arguably the taco capital of the world, Larson fully admitted that the fast food guilty pleasures were a childhood fave. And to her credit, with Weissman’s help, she managed to upscale the experience quite a bit in her video.

We can only assume they were on her mind.