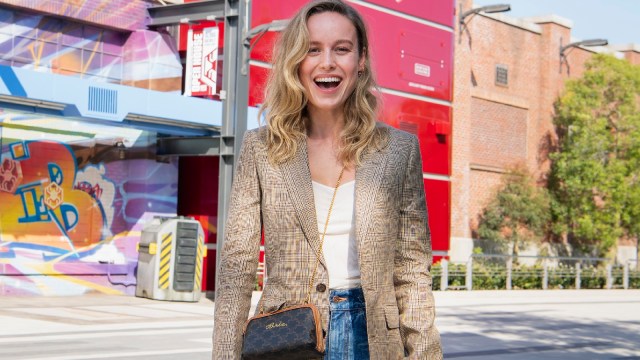 People often say one should travel in style, but often we never want to escape the comfort of our pajamas. Luckily, actor Brie Larson is giving us a lesson in how to do both in her latest post on Instagram.

The Marvel actor posted two pictures to the social media platform showing her riding on a train in a rather sleek monogrammed pajama top, hair tied back with a scrunchie. Larson wrote for the caption, “I travel by pajama only.” It looks a hell of a lot more relaxing than seeing her in that tight suit zooming around space faster than the speed of light.

Larson last appeared as Carol Danvers aka Captain Marvel at the end of the Ms. Marvel series after Kamala Khan was unexpectedly dragged off somewhere through the power of her bracelet and was replaced by a very confused Captain Marvel, who suddenly found herself in a fan girls’ bedroom in New Jersey. Captain Marvel and Ms. Marvel will return along with Monica Rambeau in the 2023 film The Marvels. Principal photography for the film finished in May 2022.

Larson is also joining another action-packed franchise, with filming currently underway for Fast X, the tenth installment of the Fast and Furious franchise. She will be joining fellow Marvel co-star and Fast and Furious regular Vin Diesel, newly introduced to the MCU actress Charlize Theron, as well as Michelle Rodriguez, Sung Kang, and Jason Momoa.

From flying through space to death-defying car rides, Larson is probably taking this moment to just sit back and relax, letting the train take her to wherever she needs to be.