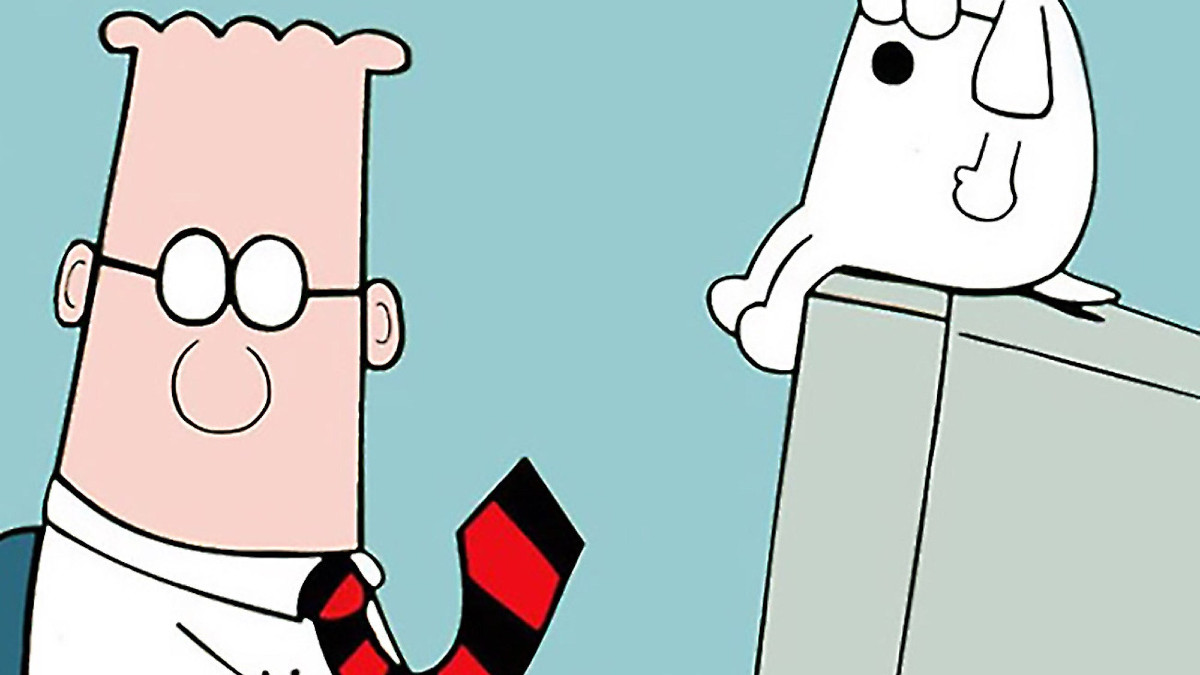 Dilbert, the once wildly popular comic strip that pokes fun at white-collar office culture, has been a staple of newspaper comics sections since the ’90s. But print media is sadly not what it once was, and in an apparent cost-cutting measure this week, Lee Enterprises, a North American publisher which provides local news in 77 markets across 26 states, drastically cut back on comics sections.

Not shockingly, Dilbert was a victim of those apparent measures, which led the strip’s creator Scott Adams to sound off accordingly on Twitter. However, Adams, who was a supporter of President Donald Trump and has gone full red pill in recent years, tweeted about the cancellation in a vague way — seemingly insinuating that the strip’s cancellation was a result of so-called “cancel culture.”

Or, at least that’s what he left his fans to determine, anyway.

“Dilbert was cancelled in 77 newspapers this week,” Adams tweeted on Tuesday, adding that it was “one large chain” that the newspapers belonged to.

Sure enough, his mentions were soon flooded with fans who blamed the “Woke New World” for not being able to “handle this kind of edgy humor” and so on. But as “Dilbert” began trending on the platform, plenty of others jumped into the fray to point out that Dilbert was among many syndicated features that had been on the chopping block.

“So, a newspaper chain called Lee Enterprises is radically reducing its column and comics coverage, cancelling many syndicated features,” tweeted comics and literary critic Jeet Heer, along with receipts. “The Dilbert Guy presented this as something just effecting [sic] him and his fans are creating a (typically) false narrative of cancel culture.”

Washington Post national correspondent Philip Bump likewise pointed out that “lots of strips were” canceled, and directed readers to Dan Piraro, the creator of the comic strip Bizarro, who had already written a blog on the subject.

In his blog post, Piraro writes “Lee Enterprises, a newspaper group that is majority-owned by a large investment firm, stopped running Bizarro and many other comics in their papers this past week. Lee Enterprises owns more than 75 newspapers across the United States and they are standardizing their comics pages with a handful of features they think Americans should read. For whatever reason, Bizarro is one that they cut, even in my hometown paper, The Tulsa World.”

He also encouraged fans who may have noticed that Bizarro disappeared from their local paper to contact the editors and express disapproval.

But given Adams’ politics, others jumped into the fray to stress how the cancellation had nothing to do with which side of the aisle he leans on, as Lee Enterprises is also a Republican donor. Not to mention, that capitalism is ultimately to blame for the corporate consolidation of media.

Yet, Adams persisted — floating the conspiracy on Wednesday morning that his opposition to environmental, social, and governance (ESG), which comprises the set of standards socially responsible investors use to evaluate a company, was the real reason for the cancellation.

“All of the wokeness and anything that permeated from ESG … so that stuff made its way into the business world, and then it became proper content for Dilbert,” Adams told Fox News on Wednesday. “The problem is that people see that even though it’s a workplace-related joke, but it’s more about how they implement it.”

OK sure, if that’s how he wants to look at it — but regardless of implementation, Dilbert was still going to get canceled in 77 newspapers, and no “woke agenda” had anything to do with it.