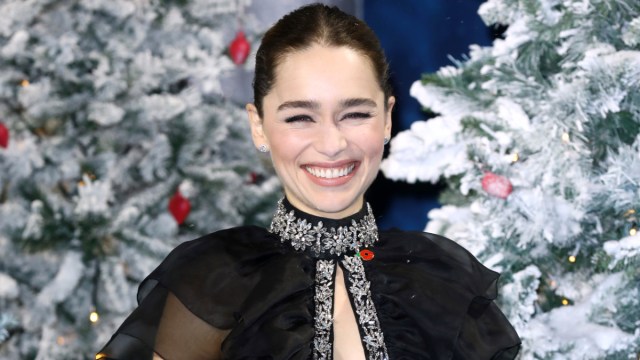 Game of Thrones wrapped up its eight-season run more than three years ago, but the cast of the pop culture zeitgeist will likely always be tied to the series to some extent, regardless of career trajectory. And on Wednesday, Emilia Clarke — Daenerys Targaryen herself — proved this enduring popularity when she encountered a Game of Thrones-themed ice cream shop, presumably while on holiday.

The shop, aptly named “Game of Cones,” is located in Fowey Landing, a small touristy town located just near the southwestern tip of the United Kingdom.

“I checked, there was no Dairy free Daenerys option…” Clarke captioned an Instagram photo of herself cringing in front of the shop, along with a pleading face emoji. “Do you think they knew I was more a fire than ice kinda gal?” she added in an absurdly long hashtag.

At the very least, Clarke is not involved in the Game of Thrones prequel series, House of the Dragon, which sets the stage for the beginning of the end of House Targaryen — a full 172 years before the birth of her character. The series, which wrapped its first season last month, is already proving to be a worthy contender to the original.

At any rate, it’s unclear whether Clarke patronized the shop — much to what would have most certainly been the unbridled joy of the staff. However, you can check out more of the shop, which also sells waffles and coffee, on its frequently updated Instagram account. We will take one of whatever the heck this is, thank you very much!