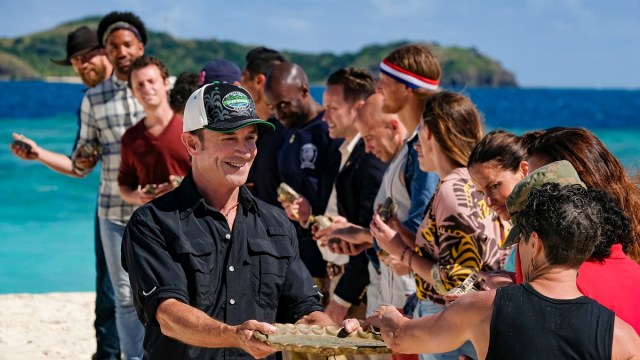 It’s not hyperbole to say Survivor has been on the air a long, long time. The reality competition has been entertaining audiences for more than 20 years, and there have been a lot of huge moments over its tenure. The first iteration of the show came out on May, 31, 2000, and there have been contestants all races, creeds, and ages on the show since that date.

Inevitably, when you have a pool of 644 people, time and unforeseen occurrences will befall some of them. Here are some stats: Of those 644, 103 have been in multiple seasons. Of those, 73 have competed twice and 23 competed in three seasons. Six people competed in four seasons and only Rob Mariano has played the game five times.

Of those 644, 12 are no longer with us. The following is a list of all of them, starting with the first death and moving to the most recent one.

Lyon participated in the tenth season of the show, which aired in the Spring of 2005. She finished in fourth place after losing the very first fire making tie breaker to Ian Rosenberger. Tom Westman eventually won that season.

Lyon was unfortunately diagnosed with breast cancer right after her season aired. She fought for five years and used her notoriety to spread awareness about breast cancer and help charities in support of eradicating it. She passed away after the cancer spread to her bones.

Andersen appeared on the very first season of Survivor at the ripe ol’ age of 64, making him the second oldest person in the group (Rudy Boesch was the oldest). He finished 15 out of 16 people and was unanimously voted out after he said he “wouldn’t mind” if it happened.

Andersen passed away after a battle with brain cancer.

Bankston was engaged to Colton Cumble from Survivor: One World and competed in Survivor: Blood Vs. Water. In that season, players had to navigate situations and challenges with people they had close ties with back home.

Bankston actually made it a lot farther than his fiance, who quit the show and placed eighth. He passed away in 2014 after a tragic accident while he was working at the Alabama Warrior Railway. He was examining something between two train cars and fell when a car derailed.

Kay was a survivor on the 17th season of the show in Gabon. He was one of those contestants that was eliminated right before the merge and missed the jury by one person. He was sent to Exile Island early in the game but unfortunately couldn’t find an idol.

When he was switched to a different tribe he was eliminated after the tribe split the vote with him and Susie Smith. There’s no cause of death—well, no official one—but he passed away unexpectedly on New Year’s Eve. Dan was an attorney but left his job and corporate life to compete on the show.

Massaro was a pro wrestler who had never camped a day in her life. Her claim to fame was causing a lot of drama with Dave Cruser in camp, but that didn’t work out for her because she was unanimously voted out in the second episode.

She was also ill most of her time on the show. She was one of the most popular female wrestlers during her WWE tenure, which lasted from 2005 to 2008. She would later make allegations that she was sexually assaulted during her time at WWE and suffered from severe depression because of it.

She was found dead in her home of an apparent suicide at 39 years old.

Boesch has the distinction of being the oldest survivor ever. He was 72 years old when he played Survivor and dominated, making the right alliance with eventual winner Richard Hatch and placing fourth. When he returned to Survivor at 75, he was voted out second.

Rudy lived to 91 years old and battled Alzheimer’s disease at the end of his life.

Robinson was the first pro NBA player to compete on the show, but he’s one of quite a few professional athlete Survivor alums. He had an 18-year career in the NBA, mostly with the Portland Trail Blazers. He played in the 28th season of the show, which was Brains vs. Beauty vs. Brawn.

He tried really hard to keep his identity a secret, but he was voted out of the game fifth. There’s no exact cause of death but Robinson had numerous health issues. He had a stroke in 2017 and a tumor was excised from his jaw in 2018. He had cancer surgery again in 2019.

Jakusz appeared on the 10th season of the show and fought her way through every second. She was almost voted out first but bounced back by winning fishing gear for her tribe. She tied with Bobby Jon Drinkard and was voted out in the fifth episode.

She passed away after a three-year fight with cancer.

Burquest has one of the more memorable faces and personalities in Survivor lore. She was the oldest woman on the Gen X tribe and made it all the way to day 35. She joined the jury and voted for Adam Klein to win the million dollars.

She was diagnosed with both ovarian and esophageal cancer in 2020 at the age of 50 and died shortly after. She was also a breast cancer survivor, but overcame that disease in 2012.

Kiser is known for finding an idol but giving it to Mike Chiesl, who didn’t even get any votes. Despite this, he still made it all the way to day 30 and ninth place.

Kiser died of a heart attack. Before and after the show he was a farmer and loved the outdoors, calling himself a “mountain man.”

Jordan crushed his season. He came in second to the winner, and he’s known for winning the immunity challenge where you match numbers in both English and Thai. He’s also known for getting choked by Robb Zbacnik during a reward challenge.

Jordan owned two restaurants and spent the majority of his later years as a gas and oil salesman. He died just a few months after his wife Linda.

Sexton competed in the first ever male vs. female competition in the history of the show. He got in trouble after the merge when the women banded together because they thought he would never vote for one of them to win.

He battled Lewy Body Dementia and eventually succumbed to it at the age of 76. He was a former U.S. Marine who fought in Vietnam. He passed away surrounded by his family.

Has anyone died on ‘Survivor?’

Here’s a fun bonus round for you. No one has died during the show, but a whole bunch of people have gotten hurt and had to leave. Let’s go through them all.

Contestant Michael Skupin from season two fell face first into a fire after he breathed in too much smoke. He was the first medivac on the show.

Bruce Kanegai, who competed in Season 12, had to be evacuated after complaining of severe stomach pains that wouldn’t subside.

Jonathan Penner from season 16 had to be airlifted after a puncture in his knee got infected. He wanted to stay but when doctors told him he could lose his leg, he conceded.

James Clement from Season 16 was the first second medevac in a season. He had an infection in his finger that spread to his joint. He was upset because in the previous season he was sent home with two idols in his pocket.

Joe Dowdle from Season 18 had an infection in his leg that was spreading to his bones and blood. Like Penner, he wanted to stay but when doctors told him he could lose his leg he also gave in and was airlifted out of there. Mike Borassi from Season 19 was airlifted after his blood pressure dropped and he couldn’t stand following a particularly grueling challenge.

Russell Swan from Season 19 went out when his blood pressure dropped even lower than Borassi’s.

Kourtney Moon from Season 24 has the distinction of being the first woman to be evacuated for medical reasons. She landed weird on a net and fractured her wrist.

Colton Cumbie from Season 24 was taken out of the game after he was found curled up in the fetal position from a bacterial infection. He famously chose to keep his idol as a souvenir.

Shamar Thomas from Season 26 got a grain of sand in his eye and there was the possibility of cornea damage, so he was pulled.

Erik Reichenbach from Season 26 got dizzy after a tribal and needed an IV. He was removed because of starvation issues, and he’s the only one to be removed during a season finale.

Caleb Reynolds from Season 32 had to be treated for exhaustion and heat stroke. His temp reached 110 degrees and he was pulled out.

Neil Gottlieb from Season 32 had a knee infection that was deemed too serious. He also left with an idol in his pocket.

Joe Del Campo, also from Season 32, had a bladder infection that had to be treated so he was pulled.

Pat Cusack from Season 37 hurt his back when he took a hard hit in the first episode.

Jackson Fox from Season 42 was pulled because he didn’t tell producers about his lithium use. He made it two days.