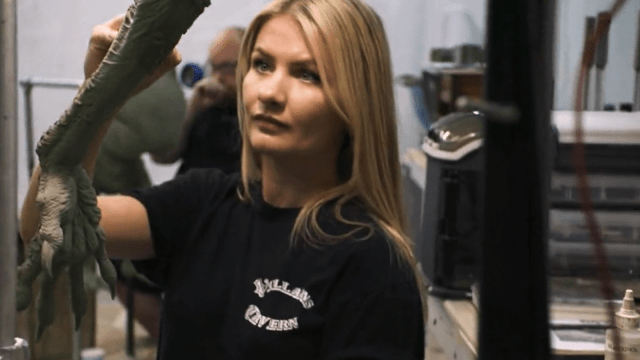 Guillermo del Toro just released Cabinet of Curiosities October 25th through the 28th, barely squeaking the series in before Halloween. To fans’ delight, the director tweeted a behind-the-scenes look at the creature that makes an appearance in the fifth episode.

Episode five simply titled “Episode 5” has a character named Pickman, described as a macabre painter. His paintings come to life in the episode, which means that a certain creature he painted somehow becomes a living, breathing beast that del Toro wanted to show off.

Ozzy? Is that a nod to Ozzy Osbourne? It’s possible. But they really don’t look that much alike.

When they say a photo can’t be heard, they lied. This one screams and screeches. No spoilers, but Yigit Cakar is preaching.

Diana thinks he’s cute? Wonder what the creators would have thought if someone in the making of the series had said those same exact words. Would Ozzy have ever made it to the film? At least he knows he has real fans.

Where are the real fans if there isn’t a sense of humor? Ozzy doesn’t look like he needs eye drops though. He doesn’t even look like he has pupils, but faded dead eyes that apparently some people find most attractive.

The Netflix Geeked Twitter account shows Ozzy in action. Close-ups of the face and the drawings that went into creating such a beast are all fodder for fans to eat alive. Seeing how it’s all done is amazing, especially when there are so many options in filming from having a guy dress up as Ozzy, to creating a puppet, or completely animating the creature. How they finally chose to film him is what gives fans even more reason to watch.

Del Toro delivered very direct instructions to his filming crew, but they were given all the freedom they needed to make a great series. One thing he made sure they knew was that he wanted the creatures to come to life and that would take a more hands-on approach rather than just relying on CGI to graphically implant a beast into the episode. With puppeteers controlling Ozzy’s every move and a greenscreen behind him, he was believable and in the moment. Not some digitally doctored monster fans can easily detect.

Streaming now on Netflix, Cabinet of Curiosities will get viewers in the mood for Halloween. There might just be some last-minute changes in costumes as trick-or-treaters hustle to go as Ozzy.