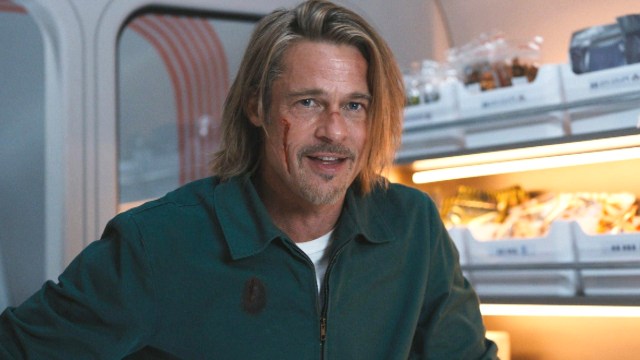 Bullet Train is an upcoming action comedy film based on the novel Maria Beetle by Kōtarō Isaka. The film has gained a lot of attention for its ensemble cast, led by the talented and charismatic Brad Pitt, who stars as a prolific assassin named Ladybug.

The film centers on Pitt’s character wanting to quit life as an assassin, but finds himself on a Bullet Train in Japan for a mission involving a briefcase. While on the train, he’s met with countless other assassins who have an interest in the briefcase, leading to a high octane train ride.

Here are all the talented members that make up the film’s cast, ranked by their impressive net worth.

British actor, martial artist, and stuntman Andrew Koji is enjoying a steady rise to fame after appearing in several short independent films. His net worth is believed to be north of $100,000, according to Popular Net Worth. He stars as Yuichi Kimura in the film, a Japanese assassin on the train.

Her career may still be relatively fresh in comparison to the others on this list, but Karen Fukuhara is evidently destined for stardom. She starred as Katana in Suicide Squad (2016) and has been winning fans over as Kimiko Miyashiro in the Amazon Prime series The Boys. Popular Net Worth claims her worth to be roughly $800,000. Fukuhara stars as a train crew member in David Leitch’s Bullet Train.

Brian Tyree Henry recently burst onto the scene, stealing hearts and garnering critical acclaim as Alfred Miles in the Donald Glover-produced FX series, Atlanta, for which he scored for himself an Emmy nomination. He has a growing catalogue of film credits, which include If Beale Street Could Talk, and Eternals. His net worth is unknown, but CAKnowledge estimates it as $1,500,000. He will portray British assassin Lemon in the upcoming film.

Much like Brian Tyree Henry, Zazie Beetz gained widespread fame and acclaim for her role in Atlanta as Vanessa Keefer. The German-American actress continues to expand her portfolio with roles in successful films like Deadpool 2 and Joker. According to The City Celeb, Beetz has a net worth of $2,000,000. She will take on the role of an assassin named The Hornet in the upcoming film.

At just 22-years-old, and with a bright acting career still ahead of her, Joey King has a net worth of $4,000,000, according to Celebrity Net Worth. She kickstarted her career as a successful child actress, and has continued to grow in popularity, boosted by her leading role in the Netflix hit trilogy, The Kissing Booth. In Bullet Train, she takes on the role of The Prince, an assassin who poses as a schoolgirl.

After making waves as the titular hero in the Percy Jackson film installments, Logan Lerman has gone on to star in critical successes such as The Perks of Being a Wallflower and Indignation. His net worth is an outstanding $8,000,000, per Celebrity Net Worth. In Bullet Train, he stars as The Son, an associate of Aaron Taylor-Johnson and Brian Tyree Henry’s characters, Tangerine and Lemon, respectively.

Michael Shannon’s career has been filled with several intense and acclaimed performances. He has earned a reputation for being a versatile actor, portraying a wide range of characters over the years. He has a net worth of $8,000,000, according to Celebrity Net Worth. His character in Bullet Train is named The White Death and spearheads a dangerous criminal organization.

Hiroyuki Sanada is one of the most prominent crossover actors from Japan. He began his career in Tokyo at the age of five as a child model and actor, and has since starred in numerous successful Hollywood films, including The Last Samurai, Rush Hour 3, and Avengers: Endgame. According to Celebrity Net Worth, Sanada ranks as a sizeable $10,000,000. He will star as The Elder in the film.

From his humble beginnings as a child actor to winning a Golden Globe for his performance in Nocturnal Animals, Aaron Taylor-Johnson has quite the enviable Hollywood career. The British actor’s net worth currently stands at $16,000,000, per Celebrity Net Worth, and will surely increase after he stars in the upcoming Marvel film, Kraven the Hunter, as the titular supervillain. He will play the role of British assassin Tangerine in Bullet Train.

Benito Ocasio, known professionally as Bad Bunny, is a Puerto Rican singer, rapper and professional wrestler who burst onto the international scene in the late 2010s after enjoying much success in the Latin market. He is now one of the most popular artists of the new decade, and has raked up a very comfortable net worth of $18,000,000, according to Celebrity Net Worth. In Bullet Train, he will portray The Wolf, a Mexican assassin who has a bone to pick with Brad Pitt’s character, Ladybug.

Coming in at the penultimate spot is seasoned Hollywood veteran and Academy Award winner, Sandra Bullock. One of several A-list celebrities to star in the upcoming film, Bullock has made a great name for herself in the film industry and is worth a staggering $250,000,000, according to Celebrity Net Worth. Her earnings are largely due to her film roles and endorsements, but she also has an impressive streak of real estate transactions. She stars as Maria Beetle, the handler of Brad Pitt’s Ladybug.

Brad Pitt is a household name at this point, and has amassed a hefty fortune from his iconic film roles, as well as his production company, Plan B Entertainment, and his real estate dealings — which include a cliffside castle worth a hefty $40,000,000. In Bullet Train, he is set to star as Ladybug, a successful assassin looking to retire, who is reeled back into one last explosive mission. Celebrity Net Worth places his financial worth at a whopping $300,000,000 — the most of any actor on the list.