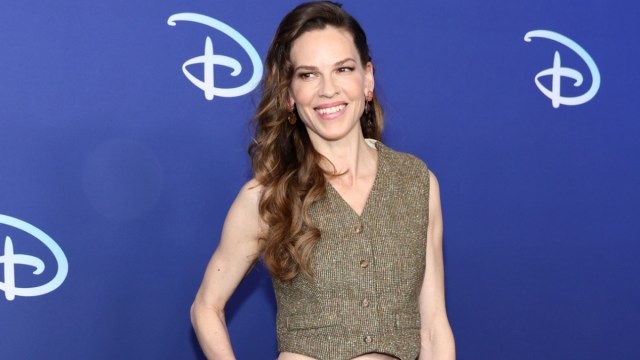 Congratulations are in order to Academy Award-winning actress Hilary Swank, who revealed on Wednesday morning that she and her husband are expecting twins. This will be the first children for the 48-year-old, who married social venture entrepreneur Philip Schneider in 2018.

Swank announced the news on Good Morning America, where she was appearing to promote her new ABC drama series Alaska Daily, about a journalist named Eileen from New York City who seeks a fresh start woking for a daily metro newspaper in Anchorage, Alaska.

“Yeah I do, and I’m so happy to share it, with you and with America right now,” the Million Dollar Baby actress said, when asked by host Robin Roberts if she had some news for the audience. “This is something that I’ve been wanting for a long time, and my next thing is I’m going to be a mom … and not just of one, but of two!”

“Yeah! I can’t believe it,” Swank continued, after it was confirmed that she was “far enough along” for it to be safe to publicly discuss. “It’s so nice to be able to talk about it and share it.”

She likewise showed off her growing bump during an appearance on Live with Kelly and Ryan.

Swank was previously married to actor Chad Lowe from 1997 through 2007, who she met while filming one of her earlier films, Quiet Days in Hollywood. In 2016, she announced that she was engaged to financial advisor and former professional tennis player Ruben Torres, however they ended their engagement just months later.

In addition to the baby news, Swank also shed some light on her new series, which premieres on Thursday, Oct. 6. In Alaska Daily, her character gets wrapped up investigating the deaths of local Indigenous women, based on real-life events.

“It was eye-opening, horrifying — all things at once, things you can’t believe are happening,” the actress said. “I want to shine a bright light on these issues, especially the missing [and] murdered Indigenous women that, I mean, no one’s doing anything about.”

“It’s an extra responsibility, you know, to do justice for the underdogs, for the underserved,” she added. “It’s just something that I’m passionate about.”

Between her new series and two babies on the way, it looks as though Swank is going to be very busy in the coming months. We wish her the best of luck!