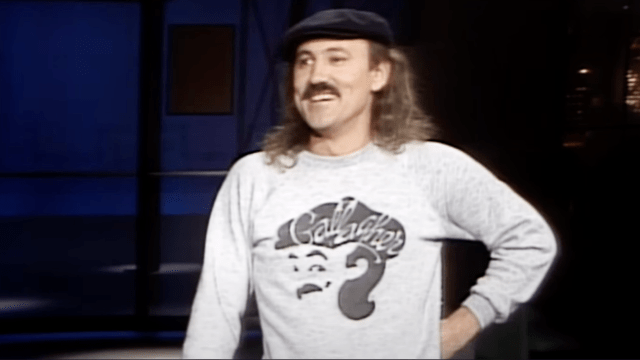 Prolific comedian Gallagher, best known for his watermelon-smashing antics, passed away Friday at age 76 due to a series of health issues. Gallagher, born Leo Gallagher in Fort Bragg, North Carolina, became a household name due to the popularity of his early ’80s comedy specials. The comedian incorporated his signature bit “Sledge-O-Matic” where he would smash items, most famously fruit, with a comically large hammer during his stand up routines.

Gallagher began doing stand up comedy after graduating from the University of South Florida with a chemical engineering degree. His comedy career gained traction during the 1970s after appearances on several late-night talk shows, notably Johnny Carson’s The Tonight Show. He did well with his stand up routine but his many made-for-TV comedy specials gained him mainstream recognition. After a prolific career in the ’80s, Gallagher continued to do thousands of live comedy shows which became more offensive with age. He continued to tour until the COVID-19 pandemic, when he decided to take a hiatus to focus on health and spending time with his children.

How many comedy specials did Gallagher make, and are they available to stream?

Gallagher made 14 Showtime comedy specials over the course of 27 years. His first TV special in 1980, “An Uncensored Evening,” is notably the first live comedy special to be broadcast on cable television. Gallagher’s prop stand up was novel at the time and literally made the audience part of the joke, as they were splashed by the objects he smashed with his Sledge-O-Matic. The comedian’s unique brand of physical prop comedy catapulted him to the forefront of 1980s pop culture and his specials were enjoyed for years.

For those wanting to pay homage to the famed comedian after his passing, many of his specials are available to stream with an Amazon Prime subscription, including all of these titles:

Whether you want to rewatch Gallagher’s many comedy specials or watch them for the first time, you can find more of his cable shows for rent on a variety of other platforms like Tubi or Apple TV.