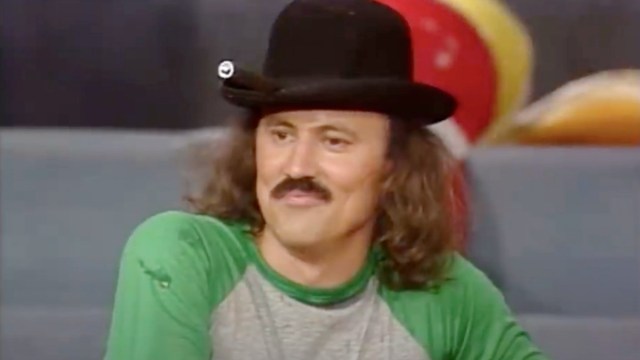 Comedian Leo Anthony Gallagher Jr., otherwise known by his stage name, Gallagher, died on Friday at 76 years old. Best known for his bit of smashing watermelons onstage, Gallagher was a prop comic who lost relevancy later into his career. Prop comics — by their very nature — are not exactly known for their staying power. But in the instance of Gallagher, there’s a very good reason why he faded into the sunset.

While his early material was relatively family-friendly (an entire generation of ’80s kids grew up on his hour-long cable comedy specials), as he got older — well, let’s just say that there was a change in the wind. It’s not uncommon for people to become more conservative as they age, but in Gallagher’s case, the years’ passing seemed to reveal some unsavory deep-seated resentments that he had likely been carrying around with him for quite some time.

Such as – Gallagher really did not seem to care for gay people, trans people, the youth, and minorities, which were all fodder in his jokes. In a 2010 piece for The Stranger titled “Gallagher Is a Paranoid, Right-Wing, Watermelon-Smashing Maniac,” Lindy West details her shock at what she thought would be an entertaining, albeit somewhat depressing performance by one of her favorite childhood comedians.

In her piece — as if the title doesn’t say to all — West writes:

“Gallagher commands the stage with the weary, sure hand of a touring comic closing out his third decade on the road. He knows what he’s doing, and even I’m not a big enough dick to dispute the ‘comedy legend’ designation on the sign outside. The people of Bremerton eat it up, and despite the discomfort of sitting in a room full of rabid, frothing conservative dickwads (especially when the ‘comedy’ veers creepily close to white-power rhetoric: ‘We’re descended from an Anglo-Saxon Viking tradition!’), it’s a relief to have them there. Gallagher needs them, and I need to not witness the complete mental breakdown of Gallagher.”

Speaking of witnessing the complete mental breakdown of Gallagher, this is a good segue to when Gallagher appeared as a guest on WTF with Marc Maron podcast.

What happened when Gallagher appeared on Marc Maron’s ‘WTF’ podcast?

Gallagher appeared on episode 145 of the WTF with Marc Maron podcast on Jan. 31, 2011. Now, Marc Maron is a skilled and nuanced interviewer who is extremely good at getting his subjects to open up about their careers. But it’s worth noting that this was relatively early on in his podcast. And though Maron didn’t necessarily intentionally bring on Gallagher to ambush him, he also wasn’t going to ignore the elephant in the room.

The conversation started out genially enough, reminiscing about the old days at the legendary Comedy Store, where so many comics got their start — though Gallagher did kick off the interview by griping about not being famous enough.

But when Maron pressed the then-65-year-old about why he chooses to target the LGTBQ+ community and minorities, it did … not go well.

Gallagher quickly got defensive, using the age-old excuse that audiences are too “sensitive” to understand his humor. However, Maron didn’t let him off the hook, pressing him about his beliefs, and whether or not his jokes come from an actual place of actual discrimination.

Even as Gallagher continued to insist that his comedy is harmless, he admitted that there are some cities where he couldn’t tell lesbian jokes “because they’ll boo you,” and in response, Maron grilled him as to why. He was so close to getting it! “Their politics is different,” Gallagher reasoned.

“Their politics, or their sensitivity to people, or a specific group of people who are being made fun of at the brunt of a joke to release the aggression of narrow-minded people, as some sort of form of entertainment is offensive to them,” Maron shot back. “That’s why.”

As he continued to press Gallagher, the interview eventually devolved into a shouting match, as you can hear in the following segment uploaded to YouTube. Eventually, Gallagher had enough of being called out, and unceremoniously ended the conversation early by taking off his mic and storming out.

In the wake of Gallagher’s death, Maron released the episode, as he does with everyone he’s interviewed who passes away. And while he says he’s not especially proud of the way he handled himself, and that Gallagher certainly wouldn’t want the interview surfacing, it was an important postscript on the man’s career.