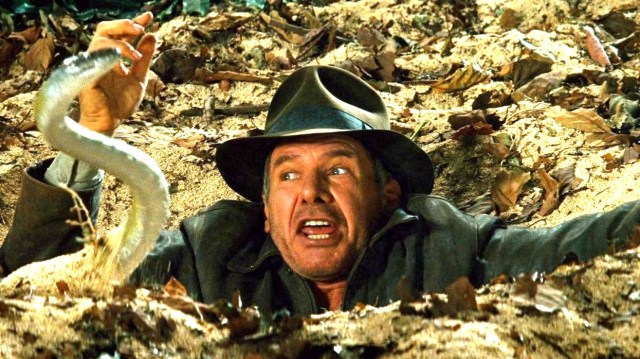 Besides Saint Patrick, Indiana Jones is the most legendary snake-hater. Cinema’s arch-archeologist can’t stop bashing serpents despite them being perhaps his least dangerous foes. To be fair, ophidiophobia (fear of snakes) is one of the most common phobias, and Indy has been pitted against an inordinate number of the creatures with extreme frequency, beginning with a fall into a snake-filled circus train as a teenager. But does Indy’s actor, Harrison Ford, share his fear? We’re here to let you know what the man behind the bullwhip thinks about coachwhips.

Ford surprised fans during a 2014 Reddit AMA by declaring his fondness for snakes, which originated at a summer camp he worked as a youth. The Chicagoan was a counselor at Wisconsin’s Camp Napowan, where he led the Reptile Study merit badge class and was tasked with “digging a terrarium and lining the walls with wooden stakes and acquiring a collection of snakes and turtles and amphibians to go in it,” he elaborated to Parade. As a result, Ford is “quite familiar with snakes and think they’r [sic] fantastic creatures.”

Naturally, Ford credits his snake-philia for equipping him to play snake-magnet Indy, especially when he was faced with 6,000-plus snakes and legless lizards while shooting Raiders of the Lost Ark. The film’s snake-wrangler, Steve Edge, had a similar recollection as Howe: “He was actually braver than Indiana Jones . . . Harrison wasn’t fazed by it whatsoever.”

So does Steven Spielberg!

Although “like” may be a strong word, Indiana Jones‘ director admitted that he’s “fine with snakes” in a behind-the-scenes featurette:

“I think I was able to suggest snakes as Indy’s phobia because I’m fine with snakes. I was raised in Arizona. We had snakes, you know, in our house . . . They would just come out of the desert and somehow get into the house, so snakes were something that I never had a problem with.”

Since every installment has some infestation, we wonder what kind of creatures will plague Indiana Jones 5 when it finally gets released. If it’s snakes, rest assured that Harrison Ford and Steven Spielberg will not have lost any sleep.