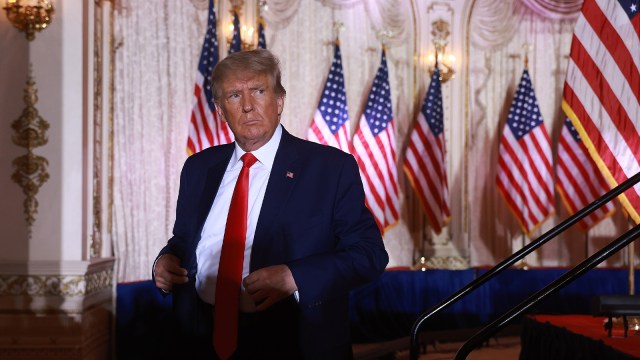 Today has been a day. Today, a Russian missile landed in Poland, killing two people and potentially kick-starting World War III, while Donald Trump announced that he will once again run for President of the United States in the 2024 election.

It’s okay if we just erase the day right? Well, alongside all this fear and misery comes at least some humor as two individuals who bought the rights to web domain donaldjtrump2024.com back in 2020 have finally found a good use for it.

In an over hourlong speech at Mar-A-Lago, Trump announced that he will run in the upcoming election as he looks to grab back the reigns of the country that he lost to Joe Biden in 2020. A loss that angered him enough to incite a mob to head to the Capitol in Washington to start an insurrection, with politicians both Republican and Democratic fearing for their lives.

After an event like this, it’s a surprise Trump wasn’t thrown in jail, let alone allowed to run for office once more. He is still under investigation for his role in the January 6 attack, which will likely be a dark cloud hanging over his upcoming campaign. Another thing that may potentially tick off the former President is that, thanks to the comedy duo, The Good Liars’ forward-thinking, he does not have access to the domain donaldjtrump2024.com.

Originally they bought it to mock Trump after he lost to Biden, but have repurposed it now that Trump really is running in the election. If you head over to the parody website, you will be greeted with a banner that has Trump’s “logo” which reads, “Trump, the loser loses again.”

Below that is a video highlighting some of Trump’s more “historic” moments in office and on his last campaign trail where he mocked a disabled reporter, said that Mexico was sending rapists, and talked about the “fine people” on both sides during the Charlottesville tragedy, all laid over videos and images of rallies he held and of the capitol insurrection.

This isn’t the first or likely last time the duo has gone after Trump, as they have attended press events disguised as Trump supporters only to cry out that the event was “boring” and they wanted to be “entertained,” something that Trump in particular likes to cater to in his rallies. Perhaps we will see them pop up again as they attempt to undermine the man who once held the most important office in the world.

Trump’s return to politics will likely only further the already deep division in the country, though he faces much more of a struggle this time around thanks to the investigations hanging around his neck. But, then again, many of us truly never believed he could win the first time?