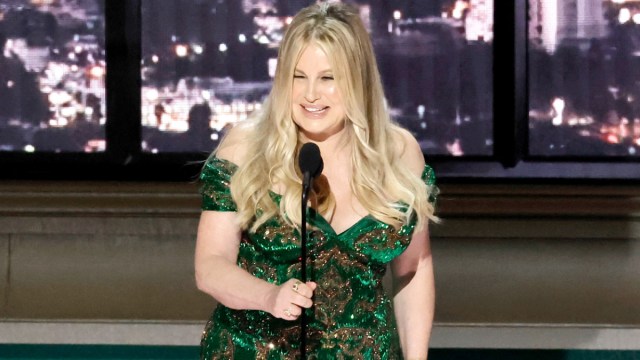 Jennifer Coolidge is finally coming into her own and getting the recognition she so very much deserves after winning her first Emmy for The White Lotus during Monday night’s awards ceremony. An acclaimed comedic character actress, Coolidge had been gracing film and television screens for nearly 30 years before being given the career-changing role of Tanya McQuoid in Mike White’s HBO miniseries. Not only did White personally handpick her, but he actually wrote the part with Coolidge in mind.

So for new and old fans alike, what better time to talk a stroll through Coolidge’s filmography and remember some of her finest work from over the years? And maybe next time our iconic queen wins a big award, the academy will put some respect on her name.

Coolidge’s first break that also made her a household name was the role of Jeanine Stifler — better known as “Stifler’s mom” — in the raunchy 1999 teen comedy American Pie. The role immediately typecast Coolidge’s status as a divorced cougar, which would go on to become a bane and a boon to her career. In the film, she plays the mother of Seann William Scott’s character who is eventually seduced by the mochaccino-drinking teen Paul Finch (Eddie Kaye Thomas), who loses his virginity to her on a pool table.

In addition to skyrocketing her to fame, the role benefited Coolidge in, uh, other ways.

Coolidge’s next big role came in the first of many collaborations with Christopher Guest in the 2000 mockumentary comedy Best in Show. In the film, she plays trophy wife Sherri Ann Cabot, married to a much older man but not-so-secretly having an affair with the female trainer of her show dog, a Standard Poodle named Rhapsody in White.

In Legally Blonde, the cult-beloved 2001 comedy starring Reese Witherspoon, Luke Wilson, and Selma Blair, Coolidge stars as Paulette Bonafonté, a manicurist who Witherspoon’s Elle Woods represents over a custody suit of her dog from her ex-husband. Her character’s iconic delivery of “I’m taking the dog, dumbass” continues to be a breakout moment to this day, and the author of this article may or may not have the quote emblazoned on a sweatshirt.

Coolidge’s second collaboration with Christopher Guest came in 2003’s mockumentary A Mighty Wind. In the film — which centered on a folk music reunion concert — she plays the ditzy sexpot publicist Amber Cole. Though her character only has a scant few minutes of screen time, Coolidge naturally steals every moment she’s in the film with her out-there European accent.

“Amber’s accent was based on a foreign exchange student I met in college,” Coolidge told The Stranger in 2003 when the film came out. “Then [the accent] turned into something else; it sounds like a combination of Scandinavian, Czechoslovakian, and a deaf woman.”

The next item on this list is, you guessed it, another Christopher guest movie. In For Your Consideration, about a low-budget production of Home for Purim, Coolidge stars as the play’s eccentric producer Whitney Taylor Brown — yet another role tailored for her unique acting abilities.

Coolidge only had a brief, two-episode stint on Starz’s catering comedy Party Down, but you’ll be shocked to hear that she made quite the impression during her limited screen time. In the series, she plays the roommate of Jane Lynch’s Constance, who briefly replaces Lynch after she left the series, before Megan Mullally took on the role of wacky older female catering employee. Her delivery of the line “grab destiny by the balls and squeeze hard” remains one of the funniest moments on the two-season series.

Last but not least, the role that turned Coolidge into an Emmy winner was that of the needy, wealthy Tanya McQuoid, who visits the resort to help get over the death of her mother. Over the course of the season, Tanya wreaks havoc with nearly everyone she encounters, from causing spoiled college students Olivia (Sydney Sweeney) and Paula (Brittany O’Grady) to lose their bag of drugs and ruining one couple’s would-be romantic dinner aboard a boat, to leading on resort manager Belinda (Natasha Rothwell) with promises of helping her start her own business.

Coolidge was so popular in the role that not only did she beat out four of her costars for the Emmy, but she’s also the only cast member Mike White is bringing back for the second installment, The White Lotus: Sicily.

Next, Coolidge will appear as a real estate agent in Netflix’s The Watcher, a limited series created by Ryan Murphy and Ian Brennan about a real-life story of a family who move into their dream home only to be terrorized by an anonymous stalker who goes by “The Watcher.” A release date hasn’t been given yet, but The Watcher is expected to premiere in the fall of 2022 and we can only imagine it will absolutely be worthy of the list.