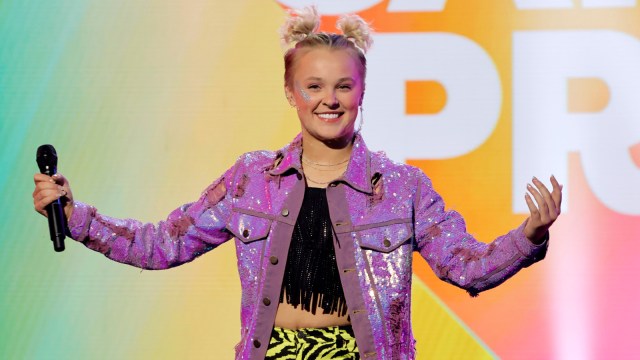 Teen sensation JoJo Siwa threw some major shade at Candace Cameron Bure over the weekend, suggesting that the Fuller House star was the “rudest” celebrity she’s ever met. And now everyone is salivating to know what the behind-the-scenes drama may have been.

Siwa was taking part in a TikTok challenge on Sunday, in which the participant names the rudest celebrity they’ve ever met, celebrity crush, nicest celebrity, coolest celebrity, and celeb that did them dirty. For each response, the 19-year-old coyly flashed her phone, but it was nothing the pause button couldn’t handle — revealing her answers to be Bure for rudest, Zendaya for her crush, Miley Cyrus as nicest, Elton John as “coolest,” and SpongeBob SquarePants as the celebrity who “did her dirty.”

As Page Six points out, Siwa did attend the premiere of Fuller House in 2016, and both women have competed on separate seasons of Dancing With the Stars. However, the exact nature of their beef is unknown.

It’s worth pointing out though, that as a self-described conservative Republican, Cameron Bure does not support reproductive healthcare and her opinions on gay marriage have likewise been dubious throughout the years. Meanwhile, Siwa came out as queer in January of 2021 and is also outspoken about her liberal political leanings.

As far as SpongeBob doing her dirty goes, however — that may be a shot against Nickelodeon, which owns the animated series. In September of 2021, Siwa railed off against the network for refusing to let her person any of the songs from her 2019 movie musical JoJo’s Follow Your D.R.E.A.M. on her The J Team on her D.R.E.A.M. tour.

“I go out on tour in January,” she wrote in a since-deleted tweet. “My movie musical was just released (with 6 new original songs)… Nickelodeon told me today that I’m not allowed to perform/add any of the songs from the film into my show. These are MY songs, MY voice, MY writing. Does this seem fair???”

“There is no reason that this music should not be included,” she added in a follow-up tweet. “Working for a company as a real human being treated as only a brand is fun until it’s not.”

Then, earlier this year, Siwa revealed to fans that she hadn’t been invited to the Nickelodeon Kids’ Choice Awards, despite being nominated for an award.

“A lot of you have been asking me why I’m not at the Nickelodeon Kids’ Choice Awards tonight,” Siwa shared in an Instagram video. “And the answer is very simple: I wasn’t invited. I’m not sure why. But I didn’t just get an invite.”

So at least that much is obvious — but with Cameron Bure, we may never know what went down.