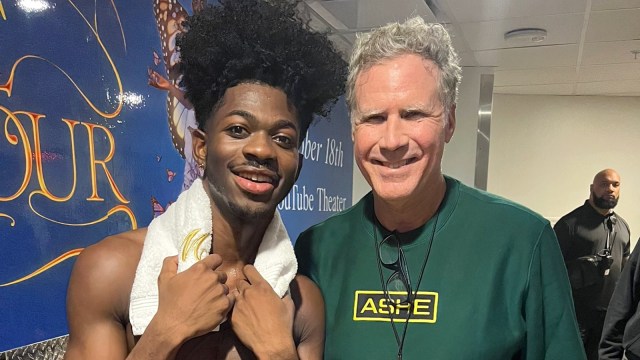 Lil Nas X is currently in the middle of his Long Live Montero fall tour, and during a Wednesday stop in Los Angeles, the rapper had the pleasure of meeting none other than comedian Will Ferrell, who was apparently in attendance.

“WILL FERRELL CAME TO MY F*CKIN CONCERT!” Nas tweeted excitedly on Thursday, along with a backstage photo of himself standing next to a beaming Ferrell. “Nobody can tell me sh*t.” (But even if someone were to dare tell the 23-year-old sh*t, we already know that he makes artful work of trolls, of the homophobic variety or otherwise.)

It’s unclear whether Ferrell was there as a fan himself, or perhaps accompanying one of his children, who are now about 12, 16, and 18, respectively. Or maybe both! Nas’ music transcends generations, and there’s no reason why the 55-year-old Ferrell wouldn’t also enjoy his music.

Yet, as the tweet quickly blew up and went viral, fans quickly evoked a super NSFW tweet from earlier in the week to explain why Ferrell may have attended the concert.

Now, the tweet was obviously a joke (we think? hope??), but that didn’t stop fans from putting two and two together.

“I know why,” quipped one fan, while another added: “Was he one of the lucky fans?”

“DID YOU GET IN THAT WILL FUSSY,” all-caps tweeted another fan, along with several wide-eyed shocked face emojis.

While we all work to get those mental pictures out of our heads, Nas himself whipped fans into a frenzy when responding to another fan who asked where Will’s hand was. “He couldn’t resist getting a good hand full of this big fat ass,” Nas joked. “And I couldn’t say no tbh.”

NSFW jokes aside, we think this could be the start of a beautiful friendship.