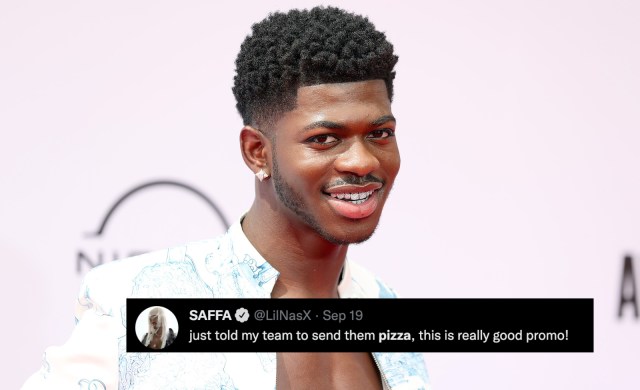 Renowned singer-songwriter Lil Nas X is a sure-fire recognizable name in the realm of pop culture — with singles like “Old Town Road” and “MONTERO (Call Me By Your Name)” undoubtedly catapulting him to massive stardom. Amidst his fame and fortune, the 23-year-old superstar has never shied away from showing the internet how humorous he can be — which now includes an attempt to feed pizza to homophobic protesters.

Over on his official Twitter account, the singing sensation reposted a video captured of Christian protestors camped outside of his concert in Boston, Massachusetts. In an act of dry humor, the Montero star insisted that he asked his team to deliver pizzas to the protestors, claiming that it would be “really good promo.”

Of course, to add even more spice to the controversial situation, the singer/rapper followed up his initial tweet by updating his fans on the entire ordeal — where he claimed that the Christian objectors didn’t want the pizza, while simultaneously jokingly admitting that he had fallen in love with one of them. Wild.

The entire situation is amusing, sure, but the actual realization of homophobic protestors still lining up outside of concerts is certainly hurtful — especially in this day and age, where the LGBTQIA+ community deserves to be celebrated and recognized in a good light.

Still, it appears as though the “Industry Baby” singer didn’t seem even slightly bothered by the collective gathering, and it definitely looks like he will be continuing his tour without a doubt in his mind about who he is and who he chooses to love — which might even be one of those protestors.