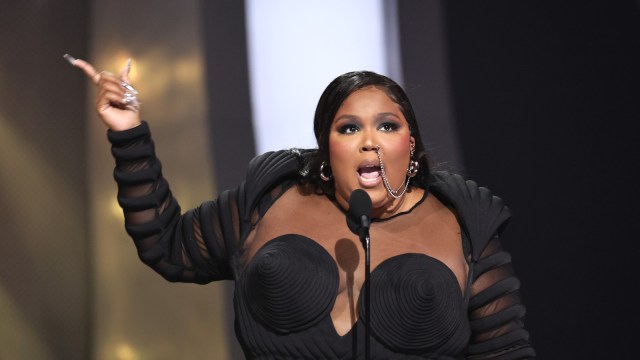 The Lizzo/Aries Spears feud continues. Everything started a few days ago when comedian Spears said he couldn’t listen to the singer’s music because he couldn’t get past the fact that he thinks Lizzo looks like a poop emoji, so Team Lizzo is the only choice.

The popular singer then appeared at the 2022 MTV VMAs and accepted the award in the Video For Good category for her song “About Damn Time,” and in her speech seemingly fired back at Spears.

“[Your vote] means everything to make a change in this country. So remember, when you’re voting for your favorite artists, vote to change some of these laws that are oppressing us. Now, to the bitches that got something to say about me in the press. I’m not gonna say nothing! Why don’t you clap back? Because bitch, I’m winning.”

She later shared the clip and said, “Keep my name in yo mouf cus I know it taste good bitch.”

With both of those events seemingly pointed at Spears, Lizzo is now saying that wasn’t the case at all. But, before we get to that, take a look at Spears’ full comments.

“Lizzo? I can’t get past the fact that she looks like the shit emoji. She got a very pretty face, but she keeps showing her body off n-gga, like c’mon, yo. I’m sorry. Listen, I ain’t the most in shape n-gga in the world, but when you funny and you got swagger and confidence and you decent looking — I think I’m at least handsome — you get pussy. But a woman that’s built like a plate of mashed potatoes, you’re in trouble.”

On Monday, she tweeted again. “Lemme make one thing VERY clear— I wasn’t addressing anybody in my speech last night.. I was addressing EVERYBODY.”

Spears admitted he knew his comments would be controversial, which he addressed in an Instagram post. However, he seems to think that his own self-deprecating comments somehow make what he said okay, even though he had no reason to bring in her name while making the crude remarks.

“I KNEW IT WAS COMING!!! If the people that are angry particularly women really paid attention to the art of dialogue interview one I even called myself out for needing to lose weight and two more importantly the main point was celebrating the wrong thing there’s a lot of hypocritical women who also bash men at laughters expense but if you’re going to celebrate sister hood while lizzo’s confidence is commendable it’s also dangerous
(MYSELF INCLUDED) the truth is in the name of sisterhood ya’ll do more damage in silence than you do in false celebration but that never gets talked about but yet shame on me!!”

We’ll keep you posted on how this shakes out, but Spears hasn’t been this relevant in a while so expect him to keep digging in.