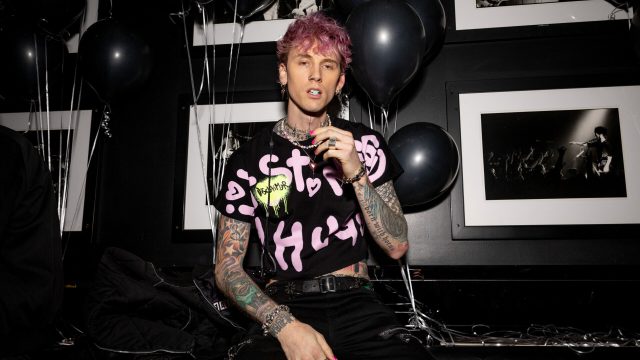 Machine Gun Kelly is opening up about his mental health struggles in his new documentary, Life in Pink.

MGK, whose real name is Colson Baker, has been an industry standout for years, and he’s no stranger to talking about mental health in that time. He’s been open about past struggles in interviews and on talk shows, but his documentary opened the door for a very personal discussion of an incredibly dark time in his life.

Life in Pink premiered on Hulu on Monday, and he shared that the spiral began after he paid a visit to the apartment his father lived in before his death.

“I flew to my dad’s apartment to clear all this stuff out. I had this really weird interaction with this neighbor who told me all these things I didn’t want to hear. That fucked me up even more because I couldn’t get closure on it. I wouldn’t leave my room and I started getting really, really, really dark.”

He also began experiencing a sense of paranoia that got worse when Megan Fox left the country for work.

“Megan went to Bulgaria to shoot a movie, and I started getting this really wild paranoia. Like I kept getting paranoid that someone was going to come and kill me. I would always sleep with a shotgun next to my bed, and like, one of the days, I just fucking snapped.”

From there, both Fox and Baker’s daughter knew it was too much, and something had to be done. Both made a passionate plea to Kelly to save his life, for him to recognize the person they both see behind his created image.

Kelly spoke about that idea and has struggled with it for some time, but he says it’s more important to him now than ever before to acknowledge the difference between Kelly and Baker.

So what did the two most important people say to him to get him to step back and start making choices to help himself?

Throughout the documentary, fans also get a look at essential conversations from those who love Baker the most — his fiancé and his daughter. They both have a different perspective of MGK than anyone else in the world, and they wish others would look past his media persona and see the man underneath, one that they love.

You can watch Life in Pink on Hulu now.