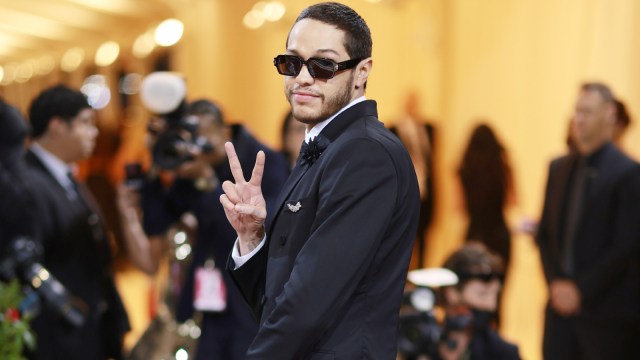 Just in case anyone was worried, Pete Davidson is doing just fine after his split from Kim Kardashian last month. That’s according to Davidson’s close personal friend Martha Stewart, who gave an update on the 28-year-old Meet Cute star on Thursday.

While speaking with E! News to plug her new partnership with Green Mountain Coffee Roasters, Stewart said that in addition to working on two movies at the time, Davidson has also “supposedly” agreed to appear on her iHeart Martha Stewart Podcast.

“I’ll find out everything you want to know on the podcast,” the 81-year-old dished, as fans are still clamoring to know everything that went down between Davidson and Kardashian throughout the course of their relationship and breakup. “But I’m excited to talk to him.”

“He’s having the time of his life,” Stewart added. “This guy is a talented actor [and] comedian, and who is a bon vivant at the same time. He’s fun.”

Stewart and Davidson sparked dating rumors earlier this year when the pair dined together with their mutual friend Antoni Porowski from Netflix’s Queer Eye back in January. At the time, the Saturday Night Live star was only rumored to be dating Kardashian.

“Never know who you’ll bump into at [Nobu restaurants],” Stewart captioned an Instagram post at the time, adding that she was on the west coast for tapings for Ellen and Animal Planet. “Busy busy. But never too busy for good food and friends. Remember [Davidson] was one of my fellow roasters on [Comedy Central’s The Roast of Justin Bieber] a few years back. Now he is on [SNL] and in some very funny movies. Cute guy with painted fingernails.”

Those rumors took on new life months later when Stewart posed holding hands with Davidson (who, to be fair, was flanked on his other side by his then-girlfriend) at the 2022 White House Correspondents’ Association Dinner in April.

Stewart laughed off the rumors when The Daily Mail caught up with her last month as she prepared to open her new Las Vegas restaurant, The Bedford by Martha Stewart, inspired by her own farmhouse in Bedford, New York.

“Pete Davidson is like the son I never had,” she told the publication at the time. “He is a charming boy who is finding his way.”

We certainly await this podcast appearance — the chemistry is clearly already off the charts.