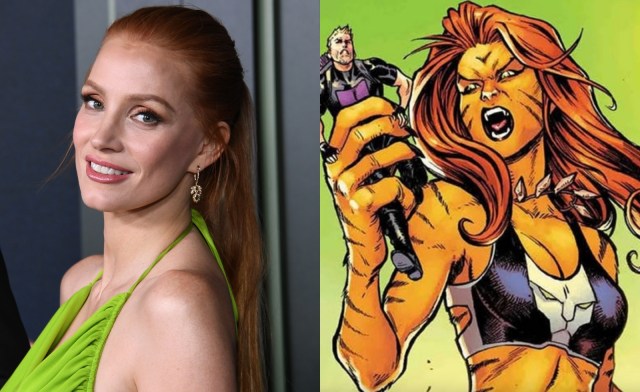 With all the major projects the MCU is introducing in the coming years, fans are expecting a host of talented actors to show up as some of their favorite comic book characters. One of these actors is none other than Oscar winner Jessica Chastain. The actress has been vocal about her love for Marvel, and though she has turned down not one, but two MCU roles in hopes of stronger offers, many are still waiting patiently for her official MCU debut.

Chastain is an accomplished actress, producer, and activist that has an enviable career which has spanned over two decades. She is known for taking on emotionally powerful roles of strong female characters, often in line with her feminist ideals.

She’s shown off her heroic and villainous side on screen, and if we’re to guess what roles the major star might be offered in the future, it’s got to be one of these 10 characters.

For many fans, the obvious choice for Chastain to play in the MCU, due to her fiery red hair, is none other than Jean Grey, or The Phoenix. Chastain already starred in X-Men: Dark Phoenix in 2019, where Sophie Turner played the red-haired mutant and she played a white-haired Vuk, the shape-shifting leader of the D’Bari. With the X-Men joining the MCU, the actress would be a perfect choice for The Phoenix, either as a hero or a villain.

Greer Nelson is a human-tiger hybrid and the protector of the Cat People. Greer was experimented on by a doctor who granted her feline powers, but her ties to the Cat People, and her duty to them comes from the Cat’s Head Amulet she wears. Greer is a strong woman who rose to the responsibility of her powers and was a valuable addition to teams like the West Coast Avengers. Her feline powers include enhanced strength, speed, and reflexes, and fans can’t help but notice the visual similarities between Tigra and Chastain, both strong women with red hair.

Chastain is no stranger to playing a badass woman in charge, and Abigail Brand, the alien-human hybrid and the head of S.W.O.R.D., the intergalactic subdivision of S.H.I.E.L.D., would be another solid choice for the actress to bring to life. Brand is a brash and no-nonsense woman, and her distinct look — green hair and dark sunglasses — command attention in every room she steps into. Chastain would be the perfect choice to play this Commander as she defends her people against the Skrull and other alien threats.

Mrs. Fantastic is one of the most powerful heroes in Marvel Comics and the heart of the classic Fantastic Four team. She gained her powers alongside the other members of the Fantastic Four when Reed Richards accidentally exposed them all to cosmic radiation. Sue is a complex character that shows that physical strength is not the only way to be a formidable leader. The strength of her character was especially evident during unique story arcs when she became a mother, or when she had to take over her husband’s role as the leader of the Fantastic Four. With the increasing amount of attention on the iconic superhero team’s debut into the MCU, fewer women would be able to do Sue justice like Chastain will.

Ophelia Sarkissian goes by many names such as: Viper, Madame Hydra, and Warrior White Princess. She was recruited by the terrorist organization, Hydra, when she was just a poor orphan on the streets, and made her way up their ranks until she became a member of the organization’s inner circle. Viper’s natural leadership qualities have led her to be the ruler of many criminal groups and undercities. Chastain would be a perfect choice to portray this ruthless villain in all her complexity.

Legendary sorceress and nemesis of King Arthur, Morgan Le Fey is not a woman to be toyed with. Morgan, or Morgana, was trained by the great wizard Merlin and even exceeded him with her mastery of witchcraft and ancient spells, as well as her half-fairy ancestry. Morgan is immortal and nearly unbeatable, and has defeated powerful Marvel heroes like Doctor Strange in the comics. If the MCU decides to include her as a villain, Chastain would be a great casting choice to play the sorceress.

Typhoid Mary is a classic and deadly foe of Daredevil, The Man Without Fear. Mary suffers from Dissociative Identity Disorder, causing her mind to be split into three personalities — Mary, an innocent and naïve girl, Typhoid, the protective and violent alter, and Bloody Mary, a violent serial killer. There is a lot of material for Chastain to work with for this character, especially if the MCU decides to continue with the dark and introspective tone that Netflix’s third season of Daredevil ended on.

Karla Sofen began her story as an unethical psychiatrist who performed experiments on her patients. She eventually acquired the Moonstone, a Kree artifact that granted the user powers. As Moonstone, Karla initially became a super-criminal, working with Baron Zemo’s Masters of Evil, but eventually switched to the side of good as a member of the Thunderbolts. The tumultuous nature of the character’s personality requires a skilled actress such as Chastain to properly portray her.

Another classic red-haired mutant that is perfect for Jessica Chastain to play is Mystique. Depending on what incarnation of the X-Men the MCU decides to portray, Chastain could play an older and jaded version of Mystique who isn’t affiliated with either Magneto or Professor X, but rather only looks out for herself. Mystique has always been a morally gray character, and her shapeshifting powers as well as her advanced physical attributes and combat skills make her a great addition to any hero or villain team.

The Queen of the Inhumans is a powerful foe, though she has fought on the side of good many times and is fiercely loyal to her husband, Black Bolt, and to her nation. As her name suggests, Medusa has prehensile hair that she can use as appendages. Her hair is also incredibly strong and can be used to bind people, lift items, and more. She was a member of the anti-Fantastic Four team, the Frightful Four, and has also fought alongside her people to battle various threats.