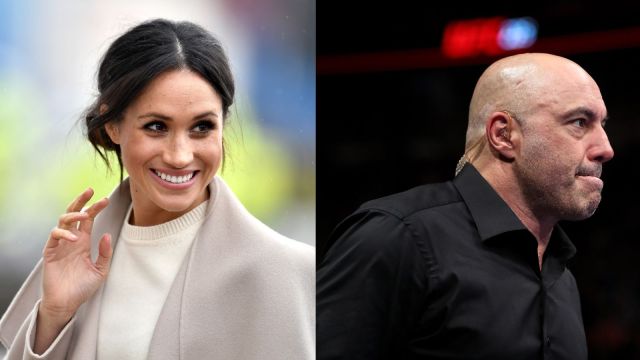 CHICAGO, IL - JUNE 09: Joe Rogan enters the octagon during the UFC 225: Whittaker v Romero 2 event at the United Center on June 9, 2018 in Chicago, Illinois. (Photo by Dylan Buell/Getty Images) / BELFAST, UNITED KINGDOM - MARCH 23: Meghan Markle is seen ahead of her visit with Prince Harry to the iconic Titanic Belfast during their trip to Northern Ireland on March 23, 2018 in Belfast, Northern Ireland, United Kingdom. (Photo by Charles McQuillan/Getty Images)

Ex-Royal Family member Meghan Markle has gone straight for the jugular with her new podcast, which has now overtaken the ever-inflammatory Joe Rogan Experience.

One of the trailblazers in podcasting, the Joe Rogan Experience has had a stranglehold on the medium since it aired its first episodes in 2009. So much has happened and changed since then, but the podcast has seemed unbeatable in the charts — until now.

Markle’s Archetypes podcast has given Rogan the royal flush as it plowed past JRE in six countries, including Rogan’s prime demographic of the United States. Debuting on Tuesday on Spotify (the same platform as the JRE), Archetypes saw tennis icon Serena Williams on as its first ever guest, which resulted in a big swing.

According to Spotify’s podcast charts for the United States, Archetypes beat out the JRE as well as the official House of the Dragon podcast from HBO Max. Whether or not Archetypes can continue to outpace JRE is up for debate, with Rogan’s mass following among the most diehard in the world of podcasting.

Rogan has faced countless controversies for comments made on his show, including racially insensitive language as well as peddling COVID-19 conspiracy theories and vaccine hesitancy. Deemed a major part of the “intellectual dark web,” Rogan has faced criticism for all his controversies, but Spotify’s CEO has refused to “silence” the star — even after losing $1 billion.

Rogan’s most recent controversy saw him suggest shooting down homeless people in order to solve the issue of people without a safe place to rest their heads. Markle and Rogan seem like absolute polar opposites, and this podcast chart battle symbolizes two starkly different philosophies towards life.