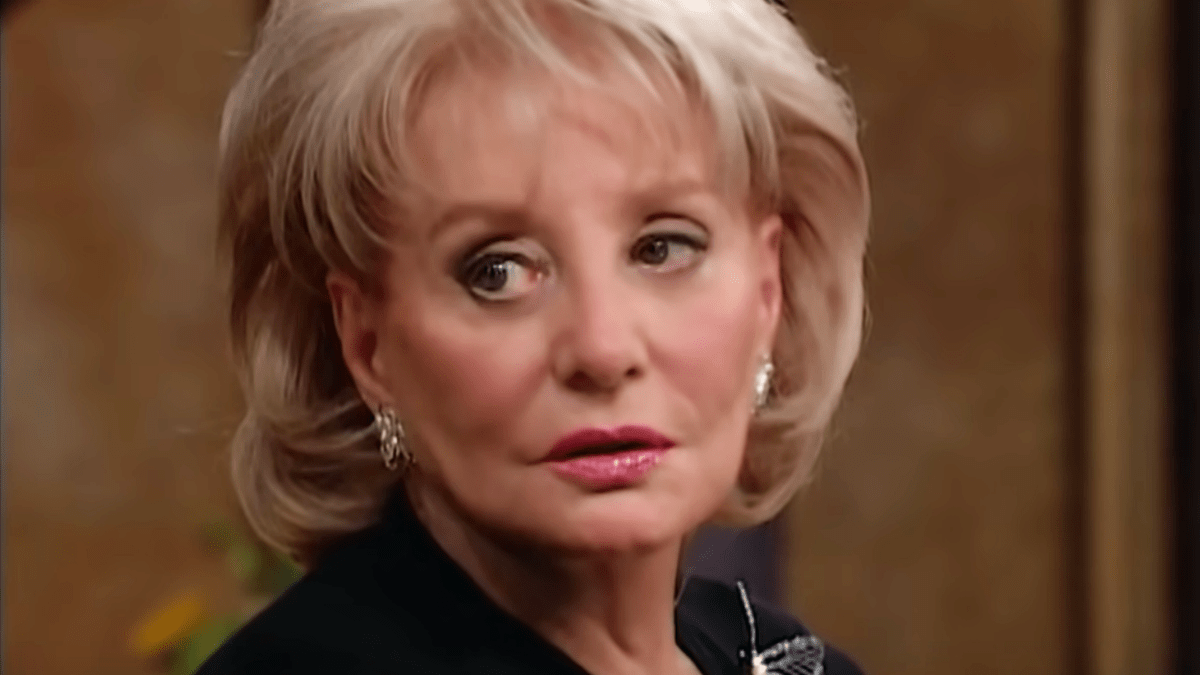 The world is mourning the loss of groundbreaking journalist and television anchor Barbara Walters after she passed away Friday evening at the age of 93. Walters was a pioneer in broadcasting, and it’s no exaggeration to say everyone working in media in some capacity has been influenced by her.

It’s difficult to sum up just how impactful Walters’ career of over 50 yeas was, but we’ll give it a try. It began in the 1960s when she worked as a writer and producer on TODAY. Soon after, she became the first anchorwoman to ever host an evening news program when she joined ABC News.

In just three short years, she became the co-host of ABC’s investigative program 20/20, where she interviewed everyone from Richard Nixon to Elton John, as well as creating The View in 1997, while continuing to work regularly as a journalist until her retirement in 2014.

Walters made a name for herself as a woman in an industry predominantly dominated by men, and she’s served as an inspiration for many. Soon after her passing, many prominent figures and celebrities reacted to the news of her death. Disney CEO Bob Iger was one of the first people to break the news, calling her a “dear friend.”

Actor and activist Alyssa Milano thanked Walters for helping her speak out on issues important to her.

Former View co-host and attorney Star Jones reacted as well, saying, “I owe Barbara Walters more than I could ever repay.”

Oprah made a touching tribute on Instagram, noting that “Without Barbara Walters there wouldn’t have been me—nor any other woman you see on evening, morning, and daily news. She was indeed a Trailblazer.” The fellow television personality called Walters a role model, and said she was thankful to have known her.

Lynda Carter posted a cute clip of herself on The View where the other hosts grill Carter about her Wonder Woman body. Walters defends Carter, saying that it was just how she looked and Carter replies, “Thank you, my friend!” The actor thanked Walters in her post, calling the journalist an “American institution” who paved the way for many women wanting to work in media.

ABC World News Tonight and 20/20 co-anchor David Muir called her an “icon, legend, and trailblazer” in a touching tweet.

Former professional basketball player Kareem Abdul-Jabbar reacted to the news and noting Walters’ reputation for asking difficult questions. He expresses gratitude for her career, saying; “Fortunately, she inspired many other journalists to be just as unrelenting. We are all better off because of her.”

Monica Lewinsky wrote a sincere Twitter thread about the late journalist. Lewinsky shared that she and Walters stayed in touch since a 1998 interview. She gave her condolences to Walters’ family and said “she was the very first person with whom i ever sat for a television interview… and will certainly be my most memorable.”

Today co-host Savannah Guthrie thanked Walters for leading the way in journalism for so many women.

American journalist Dan Rather, best known as the former longtime anchor for CBS Evening News, also called Walters a trailblazer in her field. In his post, he wrote, “The world of journalism has lost a pillar of professionalism, courage, and integrity.”

Good Morning America host Robin Roberts also gave her condolences and wrote she’s “forever grateful for her stellar example and for her friendship” in a touching post.

Longtime host of NBC’s Today Show, Katie Couric wrote a heartfelt tribute to Walters and shared a message the late anchor gave her after the former landed a big interview with then-president Bush. She wrote Walters “just as comfortable interviewing world leaders as she was Oscar winners and she had to fight like hell for every interview. I deeply admired her and she was incredibly supportive through the years.”

Meghan McCain, former The View co-host from 2017-2021, echoed the trailblazer sentiment and gave her appreciation for Walters creating The View.

Actress and television personality Melissa Rivers shared a picture of her mother Joan Rivers with Walters. Rivers wrote Walters was a “faithful friend” and “unwavering journalist.”

Arianna Huffington, author and co-founder of The Huffington Post, reported Walters’ death and called her “a legend and trailblazer.” She went on to express gratitude to Walters for being there for “big moments and at the most intimate private ones” and thanked her for being godmother to Huffington’s oldest daughter.

Actress Carmen Electra posted a picture of herself and Walters on The View, calling the late anchor “one of a kind.”

Comedian and actor Yvette Nicole Brown, best known for her role as Shirley Bennett on beloved series Community, wrote that she was honored to have been interviewed by Walters.

Former professional tennis player Billie Jean King called Walters a pioneer and expressed admiration for how “she did her homework” before interviews.

Actress and The View co-host Sherri Shepherd wrote a sweet memorial post to Walters. She thanked Walters for her friendship and for “giving her the seven year chance of a lifetime.”

New York senator and current Senate Majority Leader Chuck Schumer praised Walters for her “unforgettable” interviews. He wrote she “broke the glass ceiling” and “always wanted to get the truth.”

CNN news anchor Don Lemon praised Walters for being “amazing on television,” but noted he preferred to spend time with her in real life, calling the seat next to her at dinner, “the best seat in the house.”

Singer Jennifer Hudson posted a picture of her with Walters and wrote, “she lived a full life and leaves behind such a powerful legacy.”

Political activist and wife of Bernie Sanders, Jane O’Meara Sanders posted her own tribute. She wrote Walters “broke new ground for women in broadcasting” and did so, “with grace and dignity.”

Paris Hilton called Walters “an icon” and said she “always loved interviewing with her. She was always kind.”

Barbara Walters truly inspired many woman to follow in her footsteps and, as many said above, she was a trailblazer in her field. We will remember her not only for her hard-hitting interview style and ability to connect with others despite their differences, but for her kindness. Rest in peace.