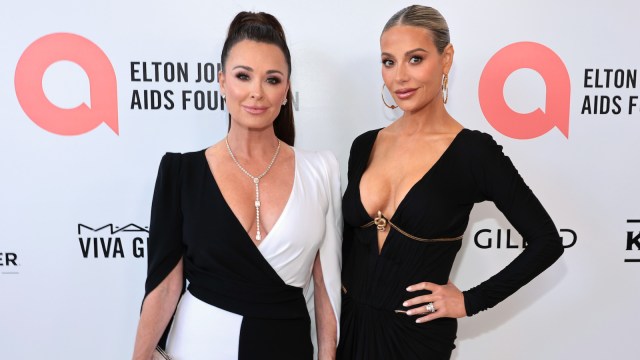 The drama over at Real Housewives of Beverly Hills has somehow gotten even more dramatic, with star Dorit Kemsley publicly going after Dana Wilkey for alluding to rumors of an affair with Kyle Richards’ husband, Mauricio Umansky.

Wilkey reportedly posted a photoshop of the movie poster for the 1957 film An Affair to Remember featuring Kemsley and Umansky in place of Cary Grant and Deborah Kerr. Take a look below at the crude photoshop below.

RHOBH viewers may remember Wilkey, who captured everyone’s attention when she wore a $25,000 pair of sunglasses on the show. She said they were a gift, but even so, the lavish shades took the ladies were taken aback at the cost.

Wilkey has only appeared in a few episodes in the early seasons of the show prior to Kemsley joining the series. Richards, an actress best known for the Halloween franchise, is the only Housewife who has appeared on every season of RHOB.

“The fans can’t stop talking about this!” Wilkey wrote in the caption, addressing the rumor that’s been circulating around the Housewives fandom but was not, until this Instagram, a mainstream point of discussion. Kemsley commented on the post, saying, “Is something wrong with you woman? Or are you just so miserable in your life you have nothing better to do?” She also noted that Wilkey is “definitely one of the thirstiest people” she’s ever met.

“Kyle and Mau are our friends and my kids call them uncle and auntie,” she went on. “Do you think this is ok for my kids to see when it’s a disgusting lie?”

Kemsley slammed Wilkey for being desperate for attention.

“If this is the only way you can make a buck then so be it but at least have some decency and stop trying to peddle false narratives especially when you know there is ZERO truth behind it and your whole motive is to just hurt people for no reason.”

She also called the 47-year-old Wilkey “sad” and “pathetic” and said that being vicious like that is “bound to bite you in the ass inevitably.”

Wilkey then doubled down and reshared the post on her Instagram Story, saying that she “obviously struck a nerve,” according to Page Six. Fans of the show also lashed out at Wilkey for the rumor.

“Dana trying to stay relevant. Good for Dorit,” one comment read. “The long response was NECESSARY this time. Speak on it girrrrlllll,” another said.

Whatever happens next will probably just mean more ratings for the show, which airs Wednesday nights on Bravo.