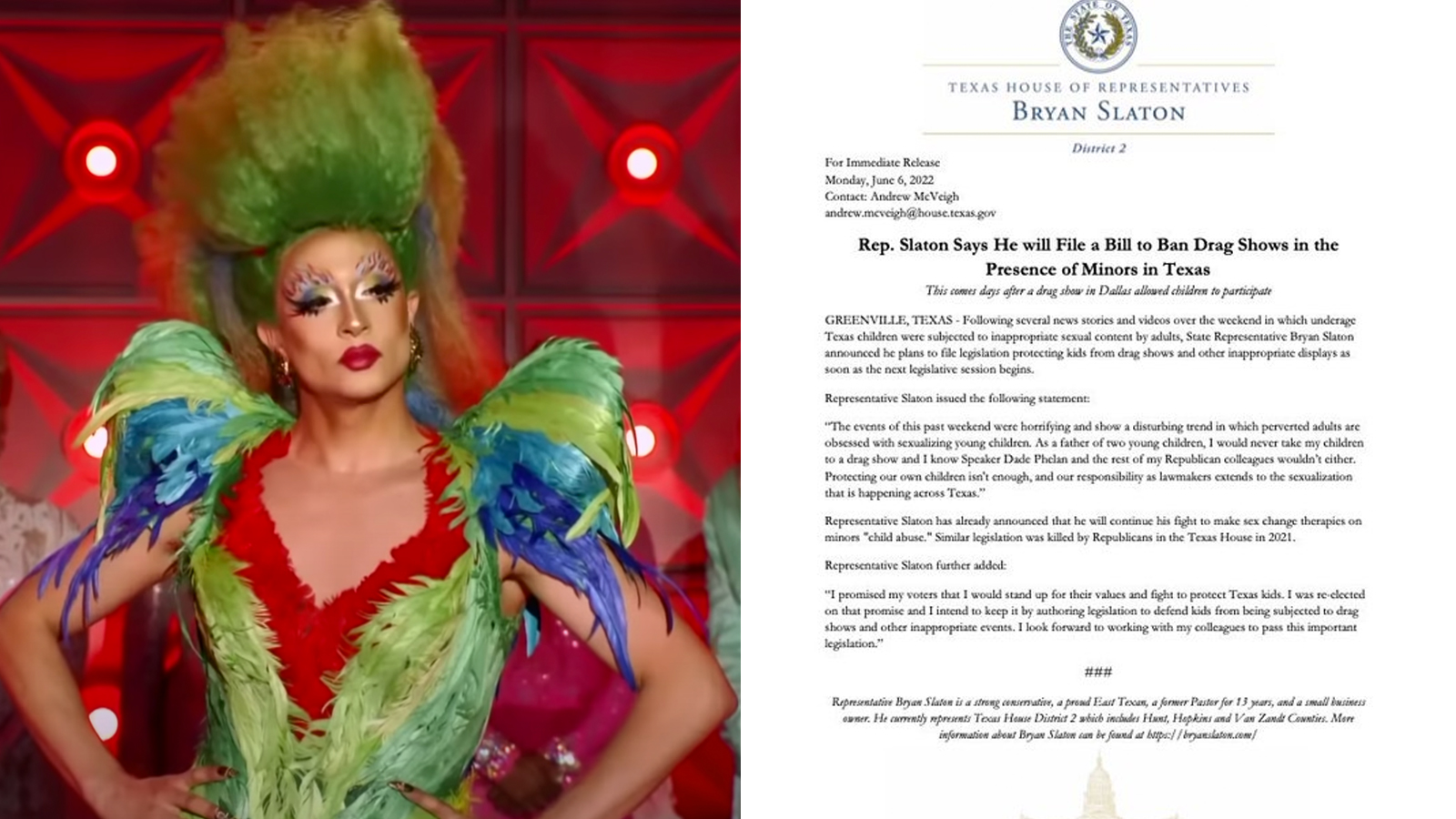 Warning: the following story makes reference to homophobia and suicide.

RuPaul’s Drag Race queens say a Texan bill to ban drag performances in front of minors would have harmful consequences for LGBTQIA+ youth in the state.

Texas State Representative Bryan Slaton announced on June 6 he planned to present the bill at the next legislative session on Nov. 8. He claimed in a statement announcing the bill via Election Wiz on Twitter that drag performers are “perverted adults” who sexualize minors.

But that’s a lot of emotion aimed at a person in a wig and heels harmlessly dancing to Lady Gaga’s “Born This Way” in a public park with kids. Drag queens aren’t jiggling their padded asses in kids’ faces. They’re reading them bedtime stories dressed as their favorite Disney princesses.

There’s a chance the bill won’t get passed. But it’s still a particularly traumatic thing for LGBTQIA+ people and their allies to see during Pride Month. It’s a period where we should be celebrating our gender, sexual orientation, and identity — not feeling threatened because our very identity and culture could be criminalized.

But the bill is also very telling of people like Slaton’s priorities and how they view queer people. Slaton came up with this bill less than a month after the horrific Robb Elementary School shooting.

Denali, who competed on RuPaul’s Drag Race season 13, told We Got This Covered she grew up in a Christian household where she was taught her queerness would “send [her] to hell”. She said it was “infuriating” to see politicians care more about a “misconstrued idea of drag queens” and the effect they seemingly have on children than the actual loss of young lives from gun violence.

“We are focusing on the wrong things. Gun laws need to change immediately. It breaks my heart to know politicians in the state that just had 19 of their children murdered care more about a misconstrued idea on drag queens and their affect on children versus the ACTUAL threat to the lives of Texas children right now.”

Denali said Slaton’s bill would continue to erase queer people if it were passed. It would further over-sexualize, dehumanize and criminalize drag. She fears that children would be taught to demonize drag queens despite child-friendly drag shows being nothing like a gig at a club.

But drag has the power to make in-the-closet queer teens or those experiencing homophobic or gender-based abuse feel loved and safe. So as Denali points out, the bill could have seriously harmful consequences on the very people it claims to protect.

“It probably would have erased the five suicidal years of my life. Representation is so important. It may even save a life for a kid living in Texas.”

“We run into a lot of homeless gay teens and these events are like the only free events. They get to come and participate and be themselves. And it’s just like any other festivity. We have games—fun houses—food and music. Some of us just happen to be in drag.

“It’s just another way of expressions and another way of inspiring and motivating our young kids. [This bill] would definitely have a great impact on our community because the things that we throw aren’t for us. They’re for the children.”

Davenport said negative reactions to drag are rooted in ignorance, claiming people like Slaton don’t understand the positive impact drag can have on people’s lives. Davenport believes that these people should speak to the drag artists who perform at family-friendly shows and the children whose lives they impact.

“A lot of these [negative reactions] are because they don’t understand it. It’s about keeping children out of that negative headspace of depression and confusion and chaos that’s going on around our world.

“They’re just like grown people that come to the club. They’ve got too many bills, too many kids, boyfriend troubles, or about to be evicted out of their apartment and have to get away from it for a second. What makes you think it’s any different for a child, especially a young gay child?”

Denali agreed with Davenport’s sentiment, saying the bill was based on an archaic understanding of drag and its grassroots origins as an underground form of expression adjacent to sex work or burlesque.

“Drag has evolved so much since it’s underground, burlesque or sex work adjacent history. It is a mainstream art form that can be as simple as dressing up as a party clown, reading stories to kids dressed as their favorite Disney characters, Pantomime, Broadway acting, modeling and so many other avenues that can be accessed by adults only, children only or both.

“Everyday that Slaton puts on his suit and goes into a meeting he is doing drag. We are all playing a role, living a fantasy and taking on a character that is different than our at home selves. That’s where the ignorance lies.”

But Denali also noted that the younger queer generation gives her hope. Even if this queer-phobic bill is passed, she believes kids are progressive and smart enough to know better than to demonize drag. Today’s queer teens have even more access to resources than people her age had as a kid, even without being exposed to drag queens.

Bryan Slaton’s bill will be reviewed at the next legislative session in Texas on Nov. 8.