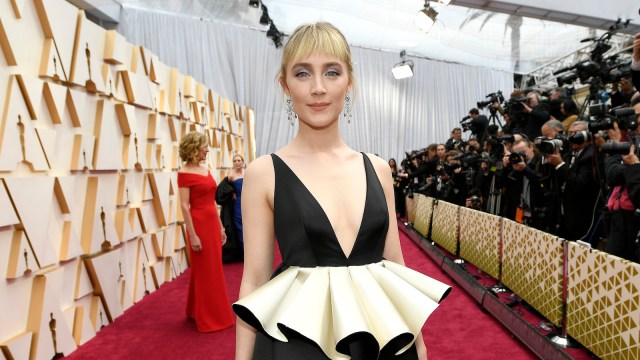 Actress Saoirse Ronan was supposed to reunite with her Little Women and Lady Bird director Greta Gerwig on the upcoming Barbie movie, but alas, it wasn’t meant to be. Now Ronan is speaking out about what could have been.

In an interview with People, Ronan revealed that she was all set to do a cameo in the movie, which stars Margot Robbie and Ryan Gosling in a much-hyped pairing. Unfortunately, she was also filming a movie about an alcoholic trying to get their life together called The Outrun, and she couldn’t make the timing work.

“I was supposed to do a cameo because I live in London and they were [filming] there,” she said. “There was a whole character I was going to play — another Barbie. I was gutted I couldn’t do it.”

This doesn’t mean she’s given up hope altogether about playing one of the iconic characters. “I have texted Margot and Greta and I’m like, ‘If you’re doing any pick-up [shots], maybe I can just walk through the background?’ she said.

Ronan, who’s been nominated for four Academy Awards, can currently be seen in the comedy mystery movie See How They Run with Sam Rockwell and Adrien Brody. Being that Ronan regularly acts in very serious Oscar-bait movies, for the most part, she said this one, in particular, felt like a nice respite from the more dramatic fare she usually tackles in her work.

The Barbie movie is also a bit of a departure for director Gerwig, who like Ronan is known for more dramatic movies. Despite the movie being about a children’s toy, Gerwig’s gone out of her way to put together a dream cast for the film. In addition to the two lead roles, she hired the red-hot actor Simu Liu, fresh off his MCU portrayal of Shang-Chi and Hari Nef from And Just Like That.

“I saw Hari’s audition tape for ‘Barbie’ and just flipped out,” Gerwig said in an interview with Vogue. “I ran into the producer’s office with a computer and pressed play and said, ‘That is it. That is our movie.’ She had a joyfulness and playfulness and twinkling intelligent humor, which was exactly the tone: knowing but not snarky, buoyant but not vapid.”

Nef is a trans woman and said she had a connection to Barbie that went beyond words on the page of a script.

“Barbies were provided for me willingly by a mother who understood me,” Neff said. “But I still knew when we were at Toys ‘R’ Us that I was doing something a little odd.”

Barbie is scheduled for a July 21, 2023 release, and we’ll keep you posted about that Ronan cameo.