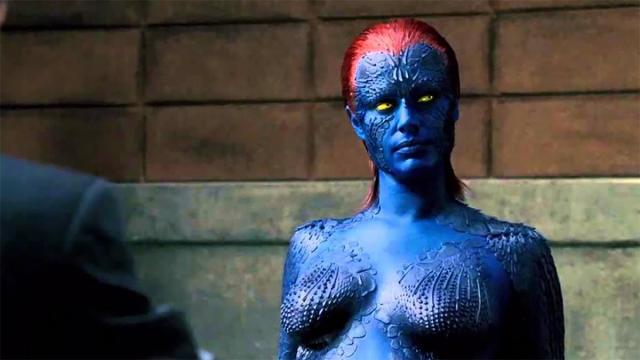 When beautiful and powerful feminist icon Kim Kardashian showed up to a Halloween party dressed as Mystique from the X-Men, she turned heads – because it turned out it wasn’t a costume party.  Her blue body paint and flaming red hair was definitely the standout of Tracee Ellis Ross’ 50th birthday bash, if not quite in the way KK had intended, and it still managed to win her a coveted spot on WeGotThisCovered’s “Best Celebrity Halloween Costumes of 2022” list.

But Twitter’s gonna Twitter, so users of the social media microblog site dug up an even more embarrassing angle on the feminist icon’s costume gaffe – rapper Saweetie wore the same exact costume in 2020. And so the debate begins: Who wore it better?

If you don’t know who Saweetie is, Twitter user “PapoLuca” is here to break it all down and provide a look at her Mystique costume:

And fans of both powerful, beautiful feminist icons turned out in droves on Twitter to compare their Mystiques:

User Elijah Alexander points out that both are great in their own way:

Meanwhile, Kim took the opportunity to turn the gaffe into a potential audition:

While this user has a clear stated preference:

Whoever wore it best, however, is irrelevant, as the important thing is that these two powerful, beautiful feminist icons owned their respective Halloweens by turning out and turning heads and owning their femininity. So instead of pitting them against each other, it’s also important to look within and ask the really important question: “Why was Saweetie going out to parties in the middle of a worldwide pandemic that kept the rest of us locked up at home?”