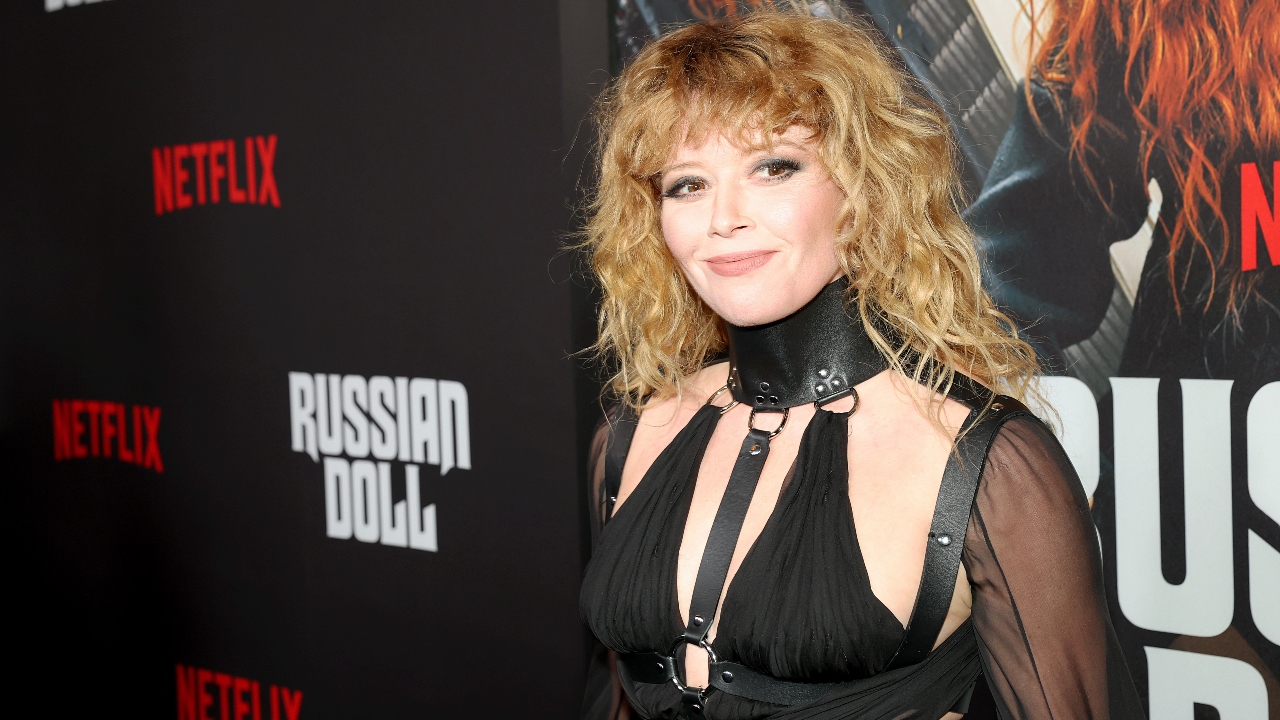 Another riveting and flat-out bonkers season of Russian Doll has landed on Netflix, so there’s no better time to look back on some of Natasha Lyonne‘s most iconic film and television roles. For Russian Doll, which Lyonne co-created, executive produces, writes, and directs, she was nominated for three Primetime Emmys, including Outstanding Lead Actress in a Comedy Series. Although Nadia Vulvokov may be Lyonne’s most recent stand-out performances, she rose to prominence with her performance in Netflix’s Orange Is the New Black as the sex and heroine addict Nicky Nichols. However, before she reached stardom, Natasha Lyonne began acting in 1986 wherein she made her feature film debut with a small, uncredited appearance in Mike Nichols’ comedy-drama Heartburn.

From 1986 to present day, Lyonne has appeared in 73 feature films (the latest being the upcoming superhero comedy DC League of Super-Pets) and 39 television series (the latest being the upcoming mystery-drama Poker Face). At age seven, she debuted on television with a six-episode role as Opal in Pee-Wee’s Playhouse. It goes without saying that Lyonne is quite the powerhouse, with numerous notable performances under her belt, but these are the very best of the bunch.

Michael Showalter’s coming-of-age romantic comedy Hello, My Name is Doris stars Sally Field in the title role as Doris Miller, an eccentric 60-something-year-old woman who lives alone. She enlists the help of her best friend’s granddaughter, Vivian, to find ways to attract the attention of a younger co-worker, John, but later discovers that he has a girlfriend. In the heartwarming film, Lyonne plays Sally, a fellow co-worker who gives advice to Doris and encourages her to live out her fantasies and pursue the younger men. Not only is Hello, My Name Is Doris an empowering love letter to older women, but a true testament to Fields’ incredible acting.

In 2016, Lyonne joined an ensemble cast that included Clea DuVall (lead actress, writer and director), Melanie Lynskey, and Jason Ritter for DuVall’s dramedy The Intervention. Distributed by Paramount Pictures, The Intervention follows four couples whose weekend getaway turns out to be orchestrated for one couple to host an “intervention” on their marriage. Lyonne plays Sarah, the girlfriend of Jessie (DuVall). Even before shooting, Lyonne, DuVall, and Lynskey were all acquaintances from appearing together in the 1999 comedy But I’m a Cheerleader (which we’re making our way towards). The Intervention feels like an exaggerated slice-of-life meets couple’s counseling drama, but it works those labels so well.

How could we not include Scary Movie 2? After its release in 2000, Scary Movie gained a cult following, spawning five films total. As an extension of the first film, Scary Movie 2 sticks to its guns with the horror spoof approach, lending inspiration from classics such as The Exorcist and Poltergeist as well as Hannibal and What Lies Beneath. In the opening sequence, Lyonne has a minor role as Megan Voorhees, an over-the-top counterpart of Linda Blair’s character Regan from 1973’s The Exorcist. Although Lyonne appears only briefly in Scary Movie 2, she steals the show with every scene, mostly due to vulgar comments or projectile vomit.

Clea DuVall and Natasha Lyonne are no strangers to playing lovers. In Jamie Babbit’s romantic comedy But I’m a Cheerleader, Lyonne plays seventeen-year-old Megan Bloomfield, a high school senior whose family suspect that she’s a lesbian and send her to a conversion therapy camp. DuVall plays Graham Eaton, another girl at the camp whom Megan befriends and eventually develops romantic feelings for. For the LGBTQ+ youth out there, Babbit’s satirical teen romance is a powerful reminder that we are who we are and we love who we love. Even Elliot Page has said that Cheerleader has “helped him overcome ‘shame and self-hatred.’“

Box office hit American Pie spawned three direct sequels from its theatrical home run in 1999. Paul Weitz’s raunchy coming-of-age sex comedy follows a group of friends who make a pact to lose their virginities at prom before starting college. In the film, which explores the most eagerly anticipated rite of adulthood, sees Natasha Lyonne portray Jessica, a fellow student whose sexual experience far exceeds that of the five virgins to whom she frequently offers advice. The American Pie saga has become a cult classic franchise even 23 years after its initial release, and even though Lyonne has a smaller part, she delivers on every one-liner and makes her presence known.

Joined by Marisa Tomei and Alan Arkin, Slums of Beverly Hills sees Natasha Lyonne portraying Vivian, a teenager living in Beverly Hills staying with her poor family. When her cousin Rita visits, she becomes an inspiration for Vivian, whose life changes from then on. Tamara Jenkins’ dramedy has gradually become a cult classic and the beauty of Slums of Beverly Hills lies in its comedic prowess. It never tries too hard to be funny, it just is. First and foremost, Slums is a comedy — and a hilarious one at that — but it does touch on some hard-hitting and emotional themes such as loss, adulthood, and navigating life in a lower-middle-class environment. Slums is one of Lyonne’s old but gold performances that accelerated her career tenfold.

Woody Allen’s musical Everyone Says I Love You is among his more critically successful films, featuring an all-star cast that includes Alan Alda, Drew Barrymore, Goldie Hawn, Edward Norton, Julia Roberts, Tim Roth, Natalie Portman, Natasha Lyonne, and Allen himself. In Everyone Says I Love You, Lyonne plays the daughter of wealthy Manhattanites Joe (Allen) and Steffi (Hawn). D.J. (Lyonne) has to contend with her extended family after her parents’ divorce. Meanwhile, everyone is abuzz about the impending wedding of her half-sister Skylar (Barrymore) and her fiancé Holden (Norton). Allen’s multifaceted storyline is told through impromptu musical numbers wherein the performers sing in their own voices. Surprisingly, Lyonne — despite her hoarse tone and New Yorker drawl — has an impressive set of pipes, but Everyone Says I Love You deserves some credit for its originality and flair.

Animated sitcom and surreal coming-of-age comedy Big Mouth centers on teenagers based on Andrew Goldberg and Nick Kroll’s childhood in suburban New York. Its main characters, coincidentally called Nick and Andrew, explore the wonders and horrors of puberty. Acting as shoulder angels and guiding the pubescent teens through their arduous journey are Maurice the Hormone Monster and Connie the Hormone Monstress. Throughout the series, the kids interact with personified objects who offer advice or propel their individual storylines; one of those objects is Suzette, a sentient pillow that Jay Bilzerian has sex with on multiple occasions (voiced by Lyonne). As a one-off cameo, Lyonne also voices an animated version of her Russian Doll character, Nadia Vulvokov, in the episode “Horrority House.” Vulgar, veracious, and vivacious, Big Mouth is not suitable for the easily offended, but highly entertaining for the moderately sick and twisted individuals among us.

Before Russian Doll, Jenji Kohan dramedy Orange is the New Black gave Natasha Lyonne her most famous role as series regular Nicky Nichols, a lesbian junkie and Litchfield inmate arrested for breaking and entering while in possession of heroine. Based on the memoir by Piper Kerman, titled Orange is the New Black: My Year in a Women’s Prison, the seven-part series focuses on Piper Chapman (Taylor Schilling) who was indicted on charges of felonious money-laundering, while also following the lives of her fellow inmates. Orange is the New Black‘s ensemble cast also includes Laura Prepon, Michael Harney, Kate Mulgrew, Jason Biggs, Uzo Aduba, Danielle Brooks, Natasha Lyonne, and more. In 2016, Orange is the New Black became Netflix’s most-watched and longest-running original series and has received many accolades. Lyonne’s performance as Nicky garnered immediate critical response and solidified her fan-favorite status.

Naturally, Lyonne would have her absolute best performance in an original series that she holds near and dear to her heart. Russian Doll is Lyonne’s brainchild, which she not only stars in, but had a huge creative influence on. The series follows Nadia Vulvokov (Lyonne), a talented game developer who finds herself stuck in an ongoing time loop (reminiscent of Groundhog Day) that sees her repeatedly dying in horrific ways and reliving the same night again and again. Eventually, Nadia meets Alan — a fellow time traveler in the same situation — and the duo attempts to solve the rupture in the space-time continuum. Russian Doll‘s first season received four Primetime Emmy Award nominations, including Outstanding Comedy Series and Outstanding Lead Actress in a Comedy Series for Lyonne. Quite frankly, it really is Natasha Lyonne’s best work yet.