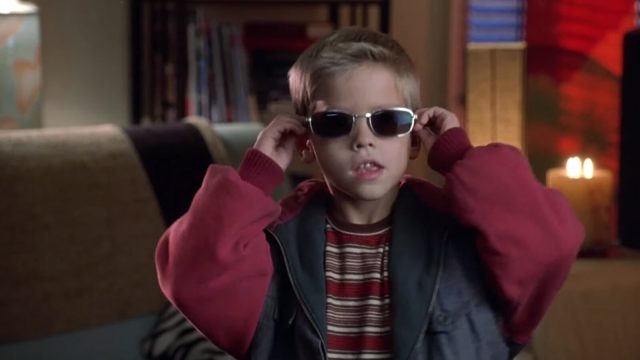 A late ’90s comedy film is experiencing an unexpected resurgence on Netflix.

Adam Sandler’s 1999 comedy film Big Daddy is rising through the Netflix ranks, landing this week on the platform’s top 10 list. It currently boasts the #9 spot, edging above 2018’s Final Score. The offbeat comedy film saw middling popularity upon its initial release, but apparently gained some new fans over the last few weeks. Its unexpected rise on Netflix is urging brand new viewers to give the Razzie-nominated film a shot.

Big Daddy‘s sudden domination on Netflix has fans — both new and old — examining the stars of the late ’90s flick. Very few viewers are strangers to the titular Sandler — who’s starred in a whopping 68 feature films over the years — but the second star of Dennis Dugan’s comedy flick is far less recognizable. People have their sights set on the youthful actor — or actors — who starred alongside Sandler, and are finding them more familiar than they may have realized. That’s because the Sprouse twins have seen quite a bit of work over the years, with stints on several Disney Channel series preceding their breakout into more adult releases.

What happened to the kid(s) from Big Daddy?

That’s right, those little faces belong to Dylan and Cole Sprouse, the popular Disney Channel duo from nostalgic hits like The Suite Life of Zach & Cody and Hannah Montana. The Sprouse twins shared a character in Big Daddy, playing the 5-year-old Julian McGrath alongside Sandler and Jon Stewart. The film marks the twins’ very first foray into film, and one of their very first major roles in general. It preceded the twins’ “big break,” of sorts, which saw them begin to dominate the Disney Channel as they edged their way into their preteen years.

Before they were the instantly recognizable stars of The Suite Life, however, the Sprouse twins were sharing roles in films like Big Daddy, and television shows like Grace Under Fire and The Nightmare Room. One half of the duo — Cole — even cinched a role as Ben Geller, Ross Geller’s son in Friends.

The young stars’ careers only grew from there. The years following their appearance in Big Daddy saw the Sprouse twins continue to largely share roles, as they appeared in smaller films and television series like I Saw Mommy Kissing Santa Claus. Eventually, their influence grew, and the twins began appearing in more popular releases. They split their time between film and television in their early years, appearing in more than a dozen films as a pair, before branching off and taking on roles as individuals.

These days, Cole is the bigger star of the pair, thanks to his starring role in the CW’s Riverdale. He portrays Forsythe “Jughead” Jones (the third) in the popular series, which has been running for six seasons, so far. He’s seen scattered roles in other projects — largely sticking to television, rather than film — and has been nominated for a number of awards. He’s even won a few, largely for his role in Riverdale. He also spent several of his post-college years leaning on the degree he earned from New York University, enjoying a brief stint as an archaeologist and even aiding in the unearthing of a Mask of Dionysus during a Bulgarian dig.

Meanwhile, Dylan has seen plenty of work as well, but few of his roles boast the fan following of Riverdale. He largely focused on film, rather than television, following the twin’s departure from shared roles, appearing in a range of smaller projects and short films between the early 2000s and now. His focus seems to have shifted away from acting in recent years, however, as Dylan graduated with a degree in video game design and eventually became the owner of Brooklyn’s All-Wise Meadery. He does still whet his acting appetite from time to time, but in general seems to leave the drama to his brother.